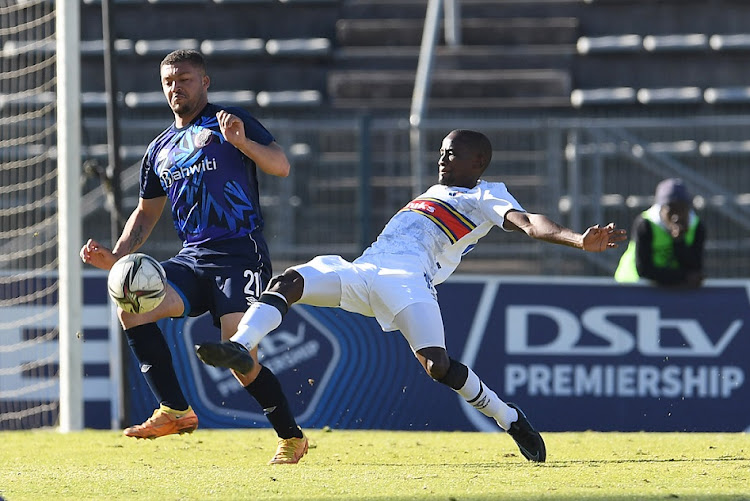 Grant Margeman of Swallows FC is tackle by Singnkhi Mpedi of University of Pretoria in the PSL promotion-relegation playoff match at Lucas Moripe Stadium in Pretoria on June 15 2022.
Image: Lefty Shivambu/Gallo Images

The Birds, who finished second-from-bottom in the 2021-22 Premiership, won the promotion-relegation playoffs with a hard-fought 1-0 victory over University of Pretoria (Tuks) at Lucas Moripe Stadium on Wednesday.

After four promotional playoff matches, Swallows finished top of the standings with seven points from two wins, a draw and a loss to ensure they will play in the top-flight next season.

It was heartbreak for Tuks as they lost a game where a draw would have sufficed to see them return to the paid ranks after they were relegated after the 2015-2016 season.

To make things worse, Tuks narrowly finished second in the GladAfrica Championship last season for a title decided on the final day, behind Richards Bay who earned automatic promotion to the PSL.

Relegation for Swallows would have seen them swiftly return to the GladAfrica, also known as the National First Division (NFD), after only two seasons in the PSL and would have been a huge blow for the brand.

There were no major incidents in the first half with Swallows, hosting this match away from Johannesburg due to the unavailability of Dobsonville Stadium, the better side.

The Birds created most of their chances through attackers Kamohelo Mahlatsi, Mwape Musonda and Monnapule Saleng but could not find their way past Tuks goalkeeper Thakasani Mbanjwa.

Most of AmaTuks’ attacks came from Womderboy Makhubu and Luvuyo Phewa, who was a surprise starter after he was used mostly as an impact player during the season.

Swallows scored the only goal of the match after 64 minutes from the close-range effort of defender Yagan Sasman after he took advantage of some sloppy defending in the Tuks danger area.

In the closing stages, Tuks tried hard to find the equaliser that could have elevated them to the PSL but it was not to be as they have to spend another campaign in the NFD.

CT All Stars beat Swallows to give promotion advantage to Tuks

Advantage University of Pretoria (Tuks). This after Cape Town All Stars pulled off a dramatic 2-1 victory against Swallows in their PSL promotional ...
Sport
3 weeks ago

University of Pretoria (Tuks) and Cape Town All Stars played to an exciting 1-1 draw during their promotion play-off clash at Tuks Stadium in Tshwane ...
Sport
4 weeks ago

Tuks feel Swallows did them a favour with their playoffs decision

University of Pretoria and Swallows FC delivered a lukewarm performance in their goalless draw at Tuks Stadium in Pretoria on Saturday as the Premier ...
Sport
1 month ago