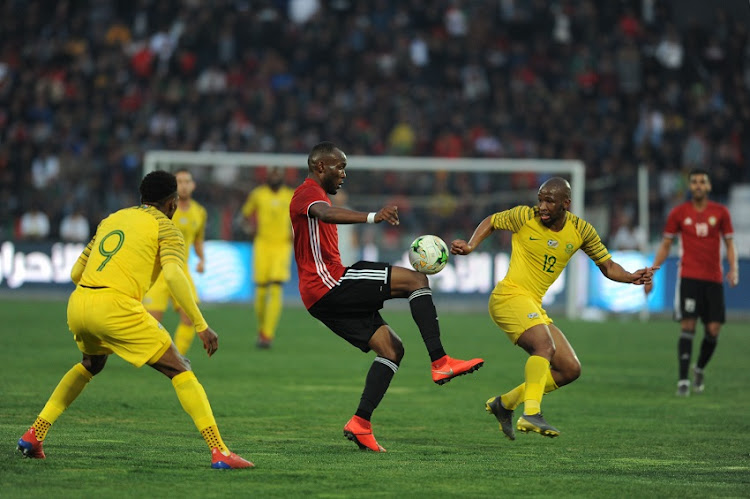 Almoatassim Bellah Hasrati of Libya battles for the ball with Lebogang Mothiba (L) and Kamohelo Mokotjo (R) of South Africa during the 2019 AFCON qualifying match between Libya and South Africa at Stade Taieb Mhiri on March 24, 2019 in Sfax, Tunisia.
Image: Salah Lahbibi/Gallo Images

Stuart Baxter has praised Bafana Bafana for responding superbly to new tactics from the coach in a hostile environment beating Libya‚ where the home fans were chanting‚ the coach said‚ “Bafana F*** you”.

Baxter praised the hard work of his team adapting to instructions for a new 3-5-2 formation he instilled as South Africa beat Libya 2-1 in Sfax‚ Tunisia on Sunday night to qualify for the 2019 Africa Cup of Nations.

He said‚ more impressively‚ Bafana did that in hostile conditions‚ where the 14‚000 Libyans in the Stade Taieb Mhiri at times pelted the field with plastic bottles.

“I’ve got those four or five training sessions [during the week].

"I’m dependent on the players … embracing [the new tactics]‚ get on with it‚ and be comfortable with it‚ so that when we get onto the field we can play. And I thought in that respect the players were magnificent‚” Baxter said.

A video of Bafana Bafana’s celebrations after their qualification for the 2019 Africa Cup of Nations (Afcon) has left Twitter users celebrating.
Sport
3 years ago

“Dean Furman‚ for example – in a normal PSL game a player will run about 10.2 kilometres. Dean ran 11.9. We had two or three who were over 11. So they gave their sweat and blood.

“I mean‚ I don’t know if anybody could work out what the Libyan fans were chanting. But it was ‘Bafana F*** you’.

Baxter said he believed the Libyans had asked for the grass on the surface to be left long to try to stop SA playing their quick-passing game.

“They did virtually everything they could do to try to knock us out of our stride‚” the coach said.

“When we went to train at the stadium the night before the grass was long but because it had been raining heavily the surface was slick.

"So we played really well in our pre-match‚ and I think that buoyed the players a bit.

“For the match‚ we got there and it had been sunny all day‚ and they had trimmed it but not cut it. So it was difficult – the ball was sticking and bouncing awkwardly.

“But as it got dark the dew that came helped the speed of the ball. And the more we opened the field‚ that was tactically one point; and two‚ technically‚ that the ball was moving and we could get our players on the ball.

“I think that was a big advantage for us. And the lads worked it out on the field.”