Chiefs coach Hunt on Mashiane: I liked him from the day that I saw him because he’s my type of player 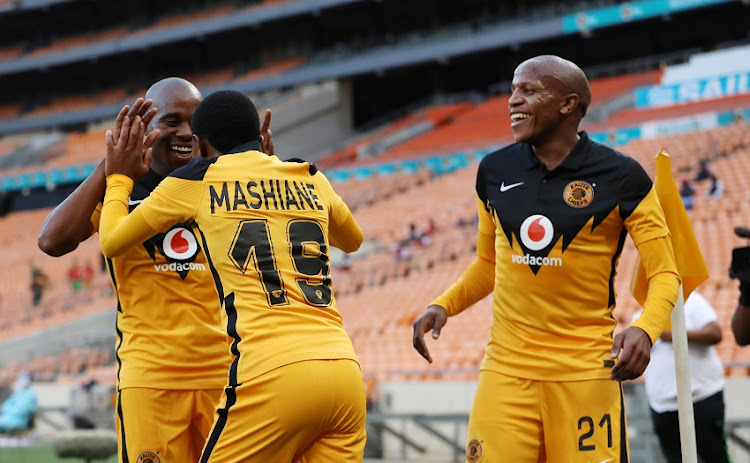 Happy Mashiane of Kaizer Chiefs celebrates a goal with teammates during the DStv Premiership match between Chiefs and Tshakhuma Tsha Madzivhandila at FNB Stadium on January 19 2021 in Johannesburg.
Image: Muzi Ntombela/BackpagePix/Gallo Images

Kaizer Chiefs coach Gavin Hunt knows his team are a work in progress‚ but has taken much satisfaction from the emergence in their three wins in a row of some of the youngsters being thrown in the deep end.

After a dismal start of one win from nine games‚ the three victories have seen Chiefs rocket from 14th place to seventh in the DStv Premiership in less than three weeks.

The wins have been far from perfect.

A 1-0 victory against AmaZulu in Durban could have gone either way‚ Chiefs weathered a storm after taking an early lead in their 2-1 win against Cape Town City‚ and Hunt said his side were a touch “heavy” beating much-troubled Tshakhuma Tsha Madzivhandila at FNB Stadium on Tuesday.

SAZI HADEBE | Alas, the most predictable thing about our league is its unpredictability

An example is Chiefs confounding critics by winning three games on the trot, rocketing them up the table
Sport
1 year ago

But the most encouraging aspect of the victories has been that Chiefs’ young players being thrown in by Hunt – a process sped up by a transfer ban‚ and a squad clearly in need of rebuilding – have looked more assured and influential on proceedings.

Hunt feels he has been getting his balance better between youth and senior heads to lead the youngsters.

“Any successful team will have that transition‚ from young to old‚ and old to young‚ but we need to get the balance right‚” Hunt said.

“ ... We’ve got to be careful how we do it [introduce young players]‚ but in our situation they have to play and they have to learn very fast.

“I liked Happy from the day that I saw him because he’s my type of player. He’s a fantastic crosser of the ball‚ and we need to work on that a little bit more.”

Ngcobo‚ Mashiane and key striker Samir Nurković – whose return has brought much-needed movement and purpose to Chiefs’ front line – seem to have established a budding understanding in the left attacking channel when they are on the field together.

“I think any good players can play with anybody‚” Hunt said.

“The idea obviously is that we want to try to play into Samir‚ but we can’t all the time.

“If I could get him [Ngcobo] higher up the field‚ which we can’t do at the moment because of other situations‚ because he has got some quality and a few goals now – but we need to get him in those better positions more often.

“But at the moment we’re trying to work on the defensive side of his game‚ which is something that he’s going to have to learn‚ but he’s getting better. Hopefully that combination can blossom a bit going forward.”

Hunt is the first to admit Chiefs still have much work to do‚ saying they laboured to some extent despite the scoreline against TTM.

“I don’t think it was a great performance. I mean the scoreline reads 3-0‚ but we looked certainly a bit heavy.

Hunt said mentally and physically the team looked a bit tired. "You know it’s been a bit hectic. But the most important thing was to try to get a result.”

Kaizer Chiefs are now on something of a roll – well, at the very least a mini-loaf – convincingly notching a third successive DStv Premiership win, ...
Sport
1 year ago

Swallows FC missed out on an opportunity to go top of the DStv Premiership standings after they were held to a 1-1 draw by determined Chippa United ...
Sport
1 year ago