NGO fights for elderly man who has been cut off from society, living with no running water, electricity or basic services 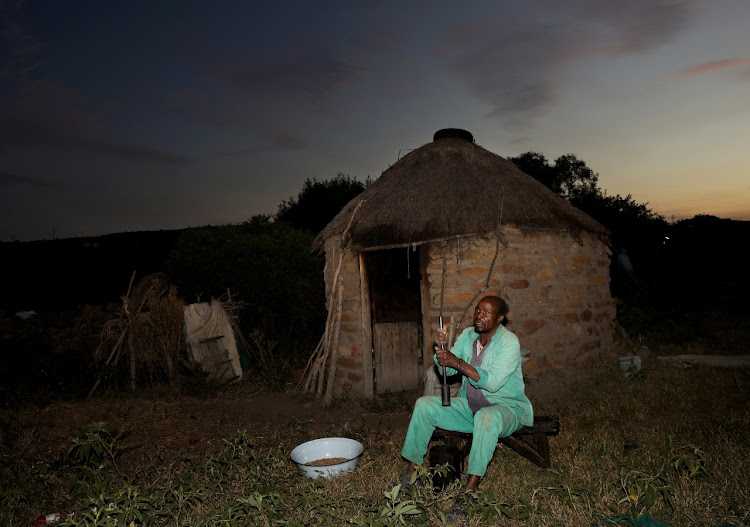 HERMIT Mpiyesende Ngcobo, 80, uses a homemade iron pestle and mortar to crush peanuts outside his secluded hut, located in the dense brush on the outskirts of Nongoma in northern KwaZulu-Natal.
Image: Sandile Ndlovu

About 35km from bustling town of Nongoma in northern KwaZulu-Natal stands a lonely stone hut in the thicket, completely secluded and exposed to the mercy and will of nature’s harshest elements.

With no electricity, running water or even people in the immediate vicinity, this homestead is symbolic of a piece of land that has been trapped in time in an area known as Mphola, previously Zagazendlala.

It is home to 80-year-old Mpiyesende Ngcobo, who became accustomed to living in isolation long before Covid-19. 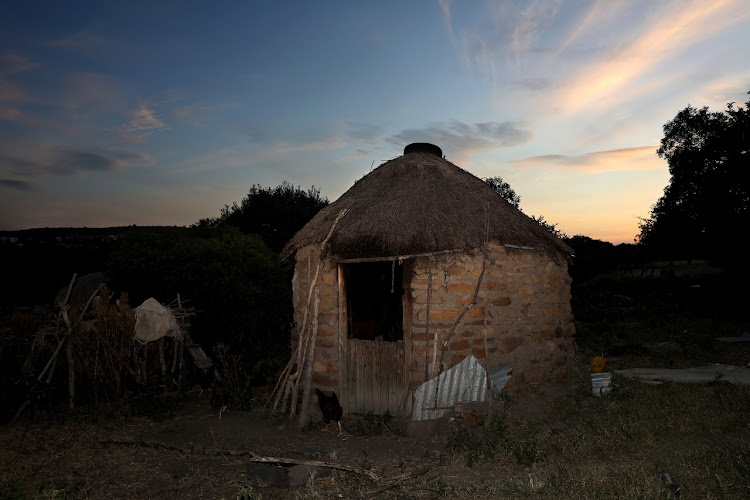 Mpiyesende Ngcobo's dilapidated stone hut is situated deep in the thicket of an area known as Mphola on the outskirts of Nongoma in northern KwaZulu-Natal.
Image: Sandile Ndlovu

Over the years it has become harder for Ngcobo to tend to his daily needs and continue the life his father and grandfather bestowed upon him – a life and environment he holds a deep respect and love for.

“My father and grandfather built us this home with their bare hands and raised me in it. He (father) never left this home because he believed that a man never abandons his home.”

It breaks my heart because my grandchildren are always keen to visit me here, but there are no rooms for them to hide their heads in their own home.

His hazy eyes act as a mirror, reflecting the calluses on his hands as he tends to his afternoon routine, navigating thorns and thick brush – buckets in hand – to collect drinking water from the Wela river.

He carefully balances on rocks lined with slippery algae and bends down slowly as his buckets fill with brown water, some of which he stores in bottles for rainy days.

Ngcobo said he had come under recent pressure to leave his ancestral land.

“All these houses that have since been built in this area came after my family started living here. They have even changed the name of the valley and requested that I move to another site, but this is where my elders left me to live and I will not move.”

Ngcobo’s home is riddled with rotting walls and doors. He sleeps on a handcrafted bed inside the dilapidated hut with no windows - his right to dignity being completely ignored in a country that prides itself on 27 years of democracy. 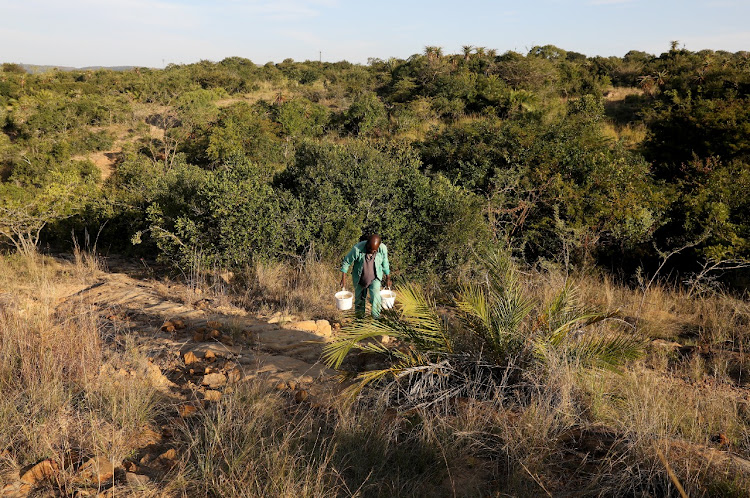 Mpiyesende Ngcobo strides through the brush carrying buckets of water he collects from the Wela river behind his homestead on a daily basis.
Image: Sandile Ndlovu

Mphola sits on the outskirts of town, and to get his pension payout Ngcobo has to cross the river and walk to the bus stop.

Barely able to walk on his own, Ngcobo feeds his 18 chickens in the afternoon with whatever little food he has.

It is one of the many norms and traditions taught to him by his father and grandfather - the livestock always has to be fed, no matter the situation in the home.

“It is a belief that even if death comes to the home, its first target of life should be the livestock, not the human life. I was breeding over 30 goats at some point, but they’ve all been stolen one by one. I have none left now.”

Ngcobo said even though his wife and four children had left the home in Nongoma in search of better living conditions and employment, he did not wish to do the same.

"My children and wife decided to relocate and even tried to take me with them, but I cannot abandon my father’s home. I have to live and die here. That’s what makes me sad the most, that I cannot just go live with my children in flats in the city. But you can see there is nothing for us to keep together - I am failing because I am sick and unwell.

“It breaks my heart because my grandchildren are always keen to visit me here, but there are no rooms for them to hide their heads in their own home. The rituals that we should be doing as a family aren’t being done because of this,” he said. 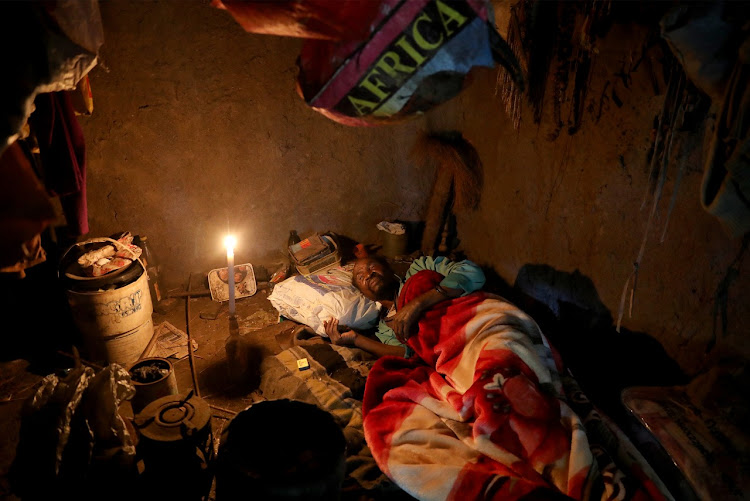 Mpiyesende Ngcobo lays down on his handcrafted bed, his only comfort after a day of hard work tending to his daily needs.
Image: Sandile Ndlovu

According to Ngcobo, Zulu traditions need to be practised, some regularly, to connect with his ancestors, who watch over the family members wherever they may be.

If these rituals are not performed it is believed that the ancestors will punish the family by death or lengthy diseases.

Already suffering from dyspnea, the medical term for shortness of breath, sometimes described as “air hunger”, Ngobo said he believed he was being punished for not having a traditional rondavel where he could burn incense and speak to his ancestors.

His weathered hands often shake when out in the cold for too long, limiting his daily routine.

His appalling living conditions have garnered the attention of Bongani Myeni and his brother Mzwandile, who founded a nonprofit organisation, Community Radical Transformation Foundation (CRTF), aimed at helping people living in poverty in rural areas.

Bongani has appealed to businesses and South Africans and to assist in lending a helping hand to Ngcobo, who desperately needs to rebuild his family home.

“As fellow Africans we can relate to the struggles he is facing, especially without a proper roof over his head. Apart from keeping safe and warm, a man needs a standing house where he can practise his family rituals and connect with his ancestors. Without a home, he might as well be naked.” 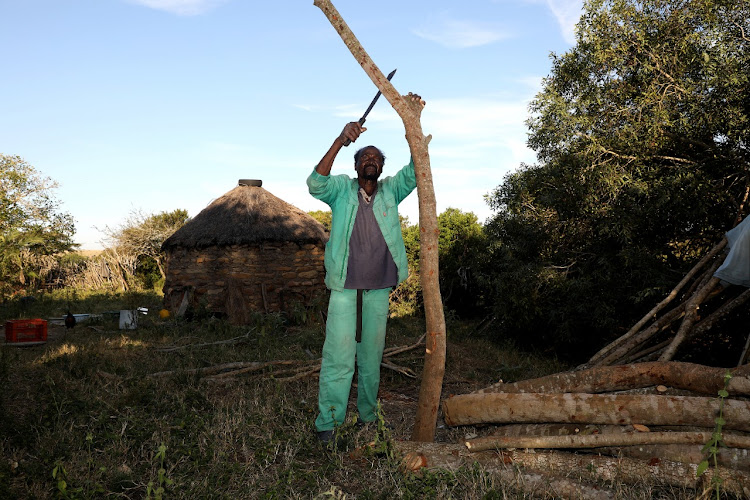 Collecting firewood is one of the tasks 80-year-old Mpiyesende Ngcobo undertakes each day to keep warm and cook.
Image: Sandile Ndlovu

The pair said they met Ngcobo through CRTF’s initiatives with Eskom, which has been installing electricity in the ward.

"Through our organisation’s research, we found that there are still a number of homes without electricity in the area. We approached Eskom and told them of the hardships the people are faced with in our communities - that some homes still do not even have a single power line connected.”

Bongani said when the electricity rollout began in the area people continuously advised them not to forget about the man living in the woods.

“When we reached this area, people kept telling us not to forget about a home situated in the woods. We didn’t believe them because there were no signs of life there, not even smoke. We had to search for baba’s home for some time before we found it and met him.”

According to neighbours, Ngcobo’s crisis was dire long before the Covid-19 pandemic.

Mbali Mpanza said it remained a mystery how Ngcobo, who has only worked as a herder in his life, had been overlooked as the area developed over the years. 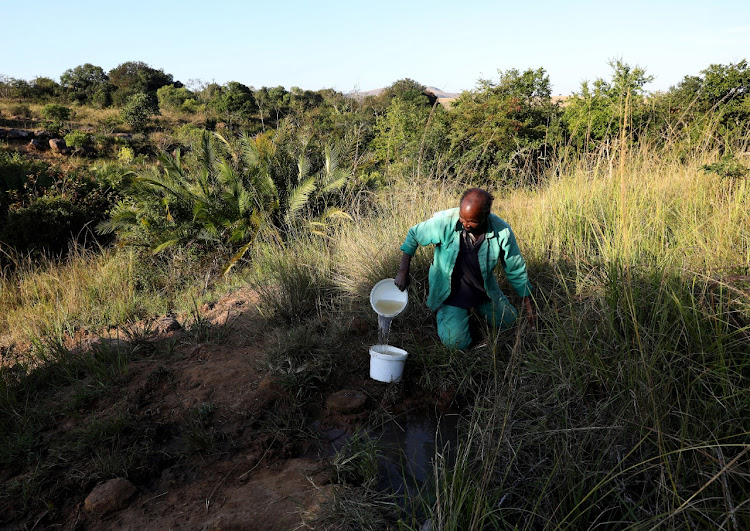 The water 80-year-old Mpiyesende Ngcobo collects from the river behind his homestead is stored in bottles.
Image: Sandile Ndlovu

“My family moved here in 2002 and baba Ngcobo was already a resident. He had probably three neighbours at the time but very far apart. A few years later we had electricity and toilets installed by the municipality. It was a surprise for us to see that his home had not been given anything, especially because he has worked for the many ndunas in the area, watching their cows.”

She said they were told the area where Ngcobo’s home was located would be converted into fields for residents to farm.

“We were confused because we asked ourselves what would happen to their home and their graves,” said Mpanza.

Bongani said they wanted to see Ngcobo getting the help that he desperately needed, but have stood firmly against accepting assistance from the local municipality and the tribal authority.