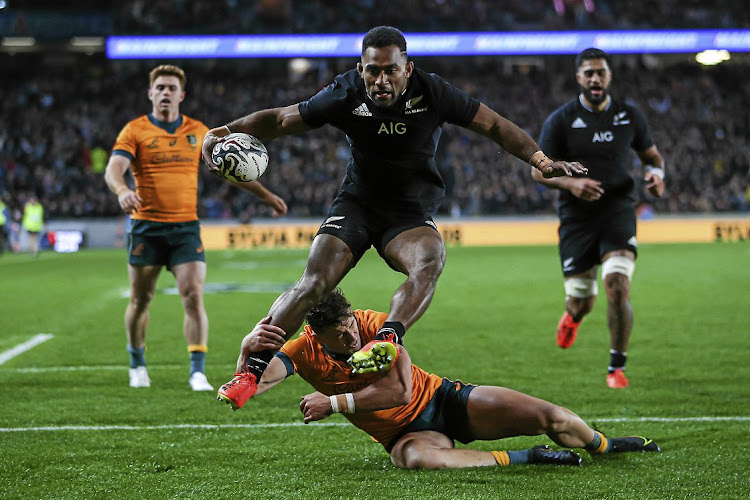 Fiji-born Sevu Reece of New Zealand is tackled by Tom Banks of Australia as he scores a disallowed try during the Bledisloe Cup rugby match between New Zealand and Australia at Eden Park in Auckland.
Image: Dave Rowland/Getty Images/File

World Rugby’s decision to revise eligibility rules that will allow players to transfer their international allegiance may help broaden the sport’s global appeal.

World Rugby will from January 1 2022 permit an international player to transfer once from one union to another if they demonstrate “a close and credible link” to that country via birthright.

Under World Rugby’s regulation 8, the player has to stand down from international rugby for 36 months and must either be born in the country to which they wish to transfer or have a parent or grandparent born in that country. Each case is subject to approval by the World Rugby regulations committee to preserve integrity.

After January 1 a player who meets that criteria can apply immediately for a transfer.

The news should largely be welcomed as it will address rugby’s legitimacy as a sporting code that can truly capture the world’s imagination.

The sport with its deep colonial roots is largely run like an old boys’ club and the disparity between the game’s haves and have-nots remains all too apparent.

However, by revising its eligibility rules the sport is taking a decisive step towards activating a talent pool that would have remained dormant under existing rules.

It will particularly benefit the hotbed of talent in the Pacific islands who over the last generation or so have provided a formidable player base for tier-one nations New Zealand and Australia.

France have stopped blowing up atolls and they too are fishing the waters of the south Pacific.

Of course trying socioeconomic conditions have helped drive the exodus of players from Samoa, Tonga and Fiji. Such has been the drain of their talent pool and so low have they dropped in the general estimation, that whenever there is talk of a new competition, the proud rugby nations are often lumped together under the mildly churlish banner of “South Seas” or “Pacific Islanders”. They are talked about as if they are circus acts.

Imagine SA, Namibia, Botswana and Zimbabwe having to play as the Kalahari Kings.

World Rugby’s revised regulations will throw Samoa, Fiji and Tonga a bit of a lifeline.

Their playing ranks could be greatly bolstered for the 2023 Rugby World Cup and even more so for the 2027 edition with players who have gained Test experience for another nation.

All Blacks with roots elsewhere could significantly impact the landscape.

Tonga could have centre Malakai Fekitoa, utility back Charles Piutau, wing Seta Tamanivalu and utility forward Vaea Fifita on their team sheet in France in 2023.

LIAM DEL CARME | Will end-of-year Bok tour be another graveyard for fringe players?

The next RWC, however, will come a little too soon for Ngani Laumapi, who could potentially represent Tonga. He will miss the 36-month stand-down period by just two months, but he could be in the mix for the 2027 instalment.

So too wing Julian Savea, flyhalf Lima Sopoaga and backrowers Steven Luatua and Victor Vito could be available for Samoa.

Former Wallaby Israel Folau could represent Tonga in France two years down the line if he took up the code again. He last played for the Wallabies in 2018.

Tier-two nations have been agitating for this shift in thinking. They have long been marginalised, but now they can draw from the raw talent that went adrift to be refined elsewhere.

Changing the eligibility rules is a small step in the right direction for rugby. Tier-two nations, however, need more if they are going to make it to rugby’s elite club.

Japan, who were ranked 20th in the world in the not too distant past, are a tier-one nation, but much of that was built on account of them being a first-world nation with infrastructure and the ability to contribute to the rapacious needs of those dining at World Rugby’s top table.