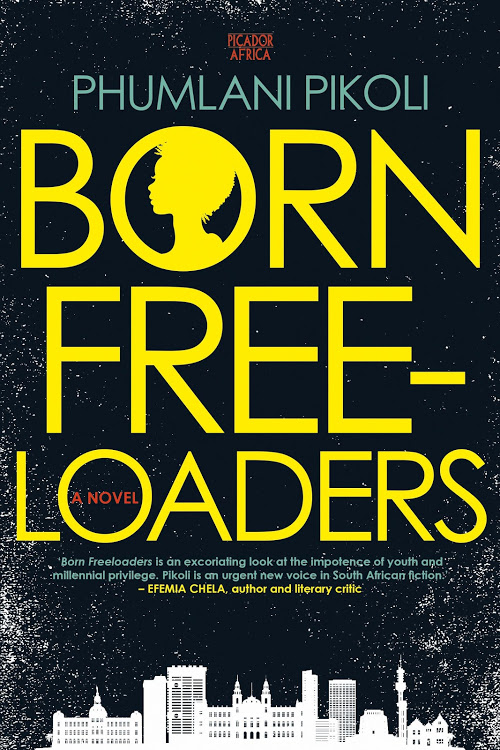 Born on the cusp of democracy, the crew of young friends in Born Freeloaders navigates a life of drinking, wild parties and other recklessness.

The siblings at the centre of the novel, Nthabiseng and Xolani, have been raised in an upper middle-class family with connections to the political elite.

Nthabiseng is lauded by her peers as she whimsically goes through life, unable to form her own identity in a world that expects her to pick a side in the fractured classifications of race.

Xolani, not having known his late father, longs for acceptance from an uncle who sees him and his generation as the bitter fruit borne of a freedom he and countless others fought for.

As the story moves across multiple spaces in the nation's capital over a weekend, Born Freeloaders captures a political and cultural moment in the city's and SA's history. Interwoven is an analogous tale of the country's colonisation and the consequences that follow. And alongside the friends' uneasy awareness of their privilege is a heightened sense of discomfort at their inability to change the world they were born into.

Phumlani Pikoli is a multidisciplinary artist whose writing has been described as "a generational ode". He is currently working on a multi-sensory exhibition with the British Council in SA, based on his acclaimed debut collection of short stories, The Fatuous State of Severity.

They hopped off the taxi and made their way towards the popular Sammy Marks Square.  Thami had convinced Nthabiseng to start off at the street cypher, before they made their way to the real adventure.

A tall and lanky figure, Thami always dressed with the intention of being a nondescript observer in any room. His clothes were simple and never branded. A pair of takkies, a plain white T-shirt and a pair of loosely fitting beige jeans.

As they walked past the market towards the State Theatre, Nthabiseng became a site of attention from vendors and passers-by alike. A few wolf-whistles and heckles about her light skin, or pointed questions about whether or not she was coloured. Others simply yelled ‘Lekgoa’ at her. She acted as if she couldn’t hear them.

‘You outchea handling town like a local,’ Thami remarked.

‘Nothing men scream at you in the streets is imaginative enough to change, wherever you are. I also wouldn’t mind if you didn’t talk down to me.’ She peered at him sideways.

‘I just meant that, like, I mean, you obviously know how to handle or take care of yourself. I just meant, like … you know,’ he said. ‘We’re, like, in a place that you probably don’t usually come to. I mean, I can’t imagine that you’re a city-centre regular, is what I’m trying to say.’

She kept quiet and concentrated her gaze on the ground as they walked to the place where all the action was said to be. She wore a long green, black and white skirt with swirling patterns that danced just above her ankles. The bright white tips of her Converse takkies made their blue material seem to glisten with novelty. The yellow T-shirt that hugged her arms and loosened up at the torso made her a visible sunflower in the city square.

As the view of the State Theatre became larger on approach, so too did the group of rappers formed in several circles dubbed ‘cyphers’. Some clocked Thami’s approach and began to shout and whistle at him. On his and Nthabiseng’s arrival, a few of the guys taking part in the cyphers came to greet him.

This was an unusual sight for Nthabiseng.

She’d never really seen Thami interact with many people; he mostly kept to himself at school. Every now and then she’d see him speaking to the stoners, wannabe rappers and some of the other strange kids that no one could really figure out. But none of them seemed to be friendships. He always looked like he was just in polite conversation.

‘Damn Thami, you on that Cashless Society “Hottentot Hop”?’ someone called out to him.

It was one of the older guys from the cypher who was considered a bit of a legend in these parts. Thami recognised that he was trying to push his buttons both by testing his music knowledge and insulting Nthabiseng’s mixed race. The guy’s name was Rele, a.k.a. Rebel-One, one of the older hip-hop heads who resented the likes of Thami and his peers.

They saw the youngsters as a new breed of spoilt kids who’d never understand how hard they needed to fight to earn their places in the community. They snarled at them for being of a time when internet connections allowed them to download as much music as they wanted to on their phones.

While they, the elders, had come from having to first prove their knowledge to the gatekeepers of their day, before being allowed to hear whatever new material they were able to get their hands on, then wait their turn for a single copy CD to make its way through multiple hands in the city before landing in their hifi systems.

"Her husband had been right; Johannesburg was no place for a woman."
Books
2 years ago

Frantz Fanon, who was born on the Caribbean island of Martinique, studied in France and then joined the struggle for the liberation of Algeria from ...
Opinion & Analysis
2 years ago