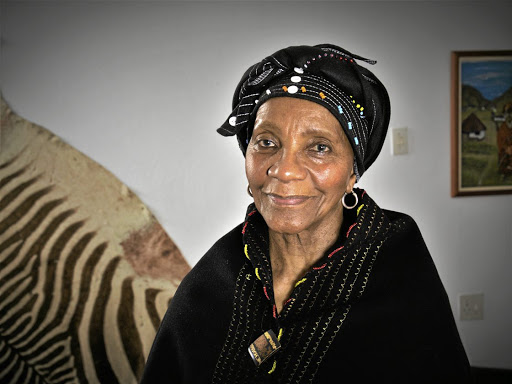 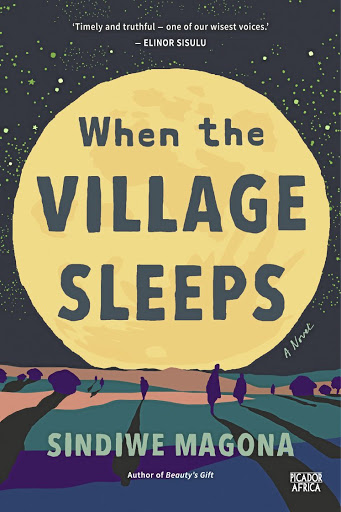 When the Village Sleeps is a visionary novel about what the loss of identity and dignity do to a people afflicted by decades of brokenness. Told through the lives and spirits of four generations of amaTolo women, including The Old, who speak wisdom with ever-increasing urgency, it moves between the bustling township setting of Kwanele and the different rhythms of rural village life.

It recalls the sweeping sagas of the great A.C. Jordan and the Dhlomo brothers and invokes the poetry of S.E.K. Mqhayi, while boldly exploring urgent and contemporary issues.

An ode to the complex strengths of SA women, When the Village Sleeps is also a powerful call to respect the earth that nurtures human life, and to live in self-sufficiency and harmony with the environment and each other.

The next morning, walking to the communal taps, Busi hoped to bump into her bestie. She had sent Thandi a ‘Please Call Me’, their sign to go fetch water together, but no response had come yet.

Maybe her friend was already waiting for her. Thandi had asked Busi to help design her ‘SWEET SIXTEEN’ invitation card, because she could use her time at the school computer to do it.

The party was strictly invitation-only. Thandi’s dad was a cop, and the uninvited would know better than to even try to ambush his favourite daughter’s Sweet Sixteen party.

The card had come out brilliantly. Busi had chosen an old-fashioned font, and now she admired its purple flourishes on her phone.

Obviously, as Thandi’s best friend, she would be there. She just had to figure out how to attend without the rigmarole of asking for permission, which might either be refused, or be given with iron chains instead of strings attached! She could hear it all now: ‘Go for an hour and a half ... no, okay then, three hours. You are a student; can’t party all night. Wait, there’s bound to be liquor there, with that older Thandi.’

Better if she just found a way to get there without anyone the wiser.

One good thing about my own mama being the way she is – she can’t keep tabs on me. She doesn’t even try or, as some mothers do, pretend to.

The only real hurdle would be if Khulu was around, paying one of her visits from the Eastern Cape. But even then, she always went to bed early, and once she fell asleep, she might as well be dead. Most parties didn’t really start getting down till around midnight anyway.

At the tap, Busi spotted Thandi a mile away. Tall, dark as night, you couldn’t miss her if you tried; not with those thick, gleaming braids cascading down her back to well below the waist, cutting her butt in half in a shimmering swirl that swayed this way and that as she gestured, hands up in the air, head and shoulders moving from side to side. In her ears, as always, she wore hoops you could shoot a ball through.

The two girls joined each other in the usual long, slow-moving line. Busi watched with dismay as water overflowed cans, pails or whatever containers were under the tap, the owners busy yapping and not watching them fill. Didn’t they know South Africa was a dry country, prone to drought and water shortages? She caught herself: most of the people here had no idea. How could they?

People believed what they wanted to believe. Truth stared them in the face, but they preferred to ignore it, letting the tap run on.

But now Thandi demanded her attention, and the two girls were soon sharing tingly secrets, keeping their voices low, although anyone with ears could hear them if they wanted.

‘Ah, my blesser, Ganja Guru, is my bestest! I have no ring on my finger, so I owe him NOTHING! Yet he’s my creamiest milk cow!’

Busi looked down sadly at her bare feet in the mud around the tap. She had also tried to get money. Had called Tata: ‘Tata, what about me?’

‘What about you?’ her father sneered.

‘Don’t you love me anymore?’ Why ask him that? His voice already held the answer.

That had brought a loud and heavy sigh from him before he barked: ‘What do you need?’

‘A father …’ The thought had run out of her mouth, a loud whisper, before she could stop it.

‘I mean, something I can get you!’ he said, shouting as if she were deaf. Busi heard only denial. Tata denying her. There was pain in her throat: money couldn’t buy what she wanted …

‘All right!’ He sounded relieved.

When Busi got back home, it was as if she heard Khulu dispensing wisdoms: ‘A girl hanging laundry around lunchtime is lazy! No man will offer lobola for a young woman who sleeps until the sun has not only risen, but stretched and yawned its way up the sky, making shadows shrink before she gets up.’

Busi found herself chuckling. As much as she was glad that Khulu was not interrupting her precious Saturday, she missed her terribly. In the days when Khulu still worked for Mrs Bird in Bishopscourt, it took just one phone call to arrange a visit after school or on Saturdays.

Of course, the ache was deeper when she was in the Eastern Cape. That was far. Busi was happy Khulu was coming to them for the holidays, due to arrive any day now.

When Khulu had worked and lived in Bishopscourt, she always spent Thursday nights with them all in Kwanele – the day she attended her church group, the Women’s Manyano. Busi cherished these visits. Those Thursday nights were the only nights that were semi-normal; times when Busi felt she had a warm, loving family. For one, her mom would do her best to act normally; she would try to be a mother in front of her own mother; she’d have dinner and spend the night at home.

However, even then, sometimes Phyllis would wait for Khulu to fall asleep and then sneak out, pretending the next morning that she had slept in the old children’s room inside the main house.

Busi truly loved Khulu. She was grateful for her – the glue that held them all together. It was thanks to Khulu they all lived in Aunt Lily’s house; or rather, the Wendy house attached to Lily’s home. They had lived there since Busi was five.

Phyllis looked ten years older than her baptismal certificate said. Alcohol and stress, Busi heard Khulu muttering. Her mother had never recovered from what her best friend, who had been maid of honour at her wedding, had done. Phyllis had caught her and Busi’s father, Mzi, red-handed so to speak ... in bed together!

And Busi heard. She absorbed all the venom spewed by and about her mother, and the older she got, the more she had to accept it as the truth. She had to listen to the gossips saying that Phyllis got so hot, many a night she didn’t find her way home at all.

The first time this happened, alarmed, the family had notified the police. Where was she? Statements were taken, but a day later, Phyllis turned up back at Lily’s. The third time it happened, no one called the police – not after that unforgettable second time, when the phantom had reappeared.

That time, it was the police who came to them. The van screeched to a halt outside the house very early in the morning, before people crawled out of their beds. Two burly police officers, male and female, marched up and banged fists against the door.

The police, alerted by a concerned citizen, had found Phyllis mindlessly wandering along Baden Powell Drive.

‘Oh,’ replied the woman police officer. ‘Three-o-three! That is when the call came in.’

Aunt Lily had joined her husband, and wanted to know who was with Phyllis when they found her.

‘Alone,’ answered both police officers. After a brief discussion, voices dropped low-low, Lily exclaimed, ‘But she might have been—’ She caught herself, dropped her voice again. She and Luvo followed the police to the van and dragged out a pap-dronk and stinking Phyllis. They shooed away the children, Busi’s eyes borrowed from a bull frog, and took Phyllis to the garden hose at the back of the house.

Afterwards, the three adults never referred to the incident. They hid it from Khulu, too. But now and then a look, a word recalled it. Much worse, less than a year later, there was another baby in the Wendy house, another little brother, Esam, for Busi to mind.

‘If I had known that Phyllis would make a habit of making children without a husband, I would have thought twice about letting her come stay with us,’ Aunt Lily grumbled. ‘Yes, she’s my sister, after all. But the add-ons – aba songezile bakhe – are red coals in my heart, I tell you!’

Of course, all this happened years and years ago – a lifetime for Busi. Back when she was Mama’s only child. With Tata gone, it couldn’t have been easy for Mama. Busi understood that now, at least more than when she was only five, and blamed her mother for making her fatherless.

But what she still did not understand was how Phyllis could not only go on letting herself down, but Busi down as well.

What has happened to us, where we end up with a 13-year-old who plans pregnancy and subsequently maims her baby?
Books
1 year ago

Babies come into the world ready to learn what it means to be human, and it is the responsibility of the grownups into whose laps they fall to teach ...
Books
1 year ago

Lerato never wanted to join her sister's stupid social club. All those pretentious people spending hours showing off their wealth. To what end?
Books
1 year ago