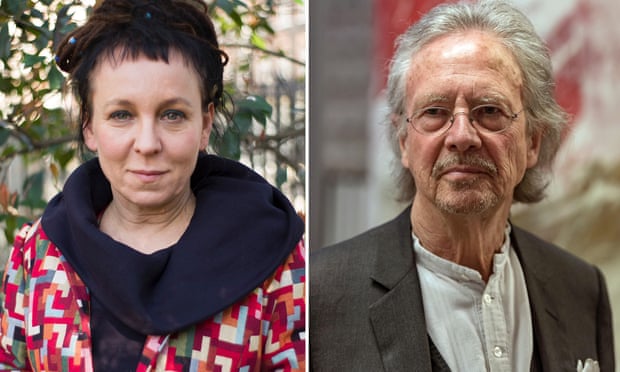 The recipients of the Nobel Prize in Literature 2018 and 2019 were announced at the Swedish Academy in Stockholm on Thursday.

Polish writer, poet, essayist, screenwriter and Man Booker Prize-winner Olga Tokarczuk (Flights, Drive Your Plow Over the Bones of the Dead, The Moment of the Bear) was awarded the 2018 prize.

The 2019 prize was awarded to acclaimed Austrian novelist, playwright and translator Peter Handke (Kaspar, Wings of Desire, A Sorrow Beyond Dreams).

Whispers of Margaret Atwood, Haruki Murakami and Salman Rushdie were doing the rounds, but the awards have a tendency to surprise the literary world. (Think Bob Dylan's win back in 2016 ... )

Awarded to the author of any country, who has, in the words of the will of Swedish industrialist Alfred Nobel, produced “in the field of literature the most outstanding work in an ideal direction", the Nobel Prize in Literature is considered the world's most prestigious literary award.

No award was presented last year owing to sexual harassment allegations against Jean-Claude Arnault, a photographer who is married to academy member and author Katarina Frostenson.

After internal investigations against Arnault, it was further revealed that he was possibly responsible for leaking the names of Nobel laureates, including Dylan and Harold Pinter.

Soyinka and Gordimer's wins are of special significance, as Soyinka was the first black African author to receive the award and Gordimer the first white African woman to be announced the recipient of this coveted prize.

The prestigious Nobel Prize in Literature has been awarded to the renowned British novelist Kazuo Ishiguro.
Lifestyle
4 years ago

A giant of SA literature in black and white

NADINE Gordimer once smuggled her book Burger's Daughter to former president Nelson Mandela when he was jailed on Robben Island for treason. Mandela ...
Lifestyle
8 years ago

1927-2014 Gabriel García Márquez, who has died at the age of 87, was widely regarded as one of the 20th century's finest writers. A leading exponent ...
Lifestyle
8 years ago