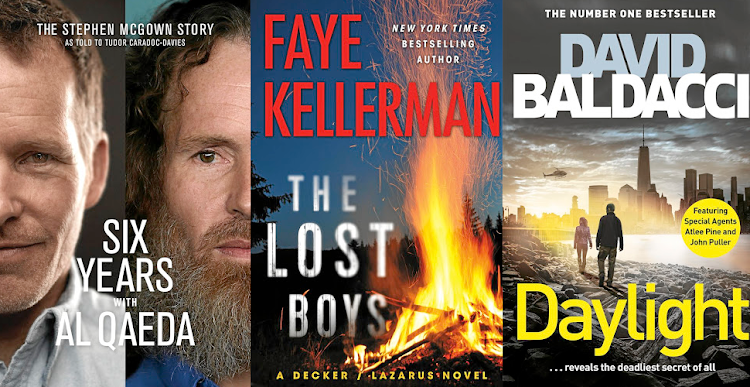 The true story of Al Qaeda's longest-held prisoner, a moving story of detection and devastation, and David Baldacci at the top of his game.
Image: Supplied

This is the true story of Al Qaeda's longest-held prisoner, South African Stephen McGown. Captured with two other men in Timbuktu during his grand African motorbike adventure, he details the surreal and anxious experience of his life in the desert. During captivity he converted to Islam and learnt French, Arabic, and many survival skills. The book also shares personal perspectives from his wife, father, and Gift of the Givers. A fascinating read. Tiah Beautement @ms_tiahmarie

In SA, one can only dream of a detective like Peter Decker, the former LAPD super-cop who combines human insight and intelligence with hard work and compassion. Decker would be out chasing killers, not beachgoers. In The Lost Boys, Decker - who is relocated to a sleepy town in the American north-east - and colleagues track a disabled man who has disappeared. A forest search unearths the remains of a student, one of three who went missing a decade earlier, and suddenly Decker is juggling two deeply disturbing cases. Kellerman has 22 bestselling thrillers featuring Decker and his Orthodox Jewish wife, Rina Lazarus, a mathematician and teacher whose religion and former life in Israel bring depth to their lives and some favourable mentions for a country that suffers even worse press than SA. She tells an engrossing, moving story of detection and devastation, leaving some strands hanging in a way that's irritating but also enticing. William Saunderson-Meyer @TheJaundicedEye

The Daily Mail's shout on the book says "Baldacci is at the top of his game", and in this case it's the truth. In this, the third of the author's Atlee Pine series, the FBI agent, weightlifter and MMA fighter has taken a sabbatical from her job to find out what happened to her twin sister, who was kidnapped when they were six years old. A clue sends her to New Jersey, where she meets military investigator John Pulley - a hero in another of Baldacci's series. There's something hinky going on in Trenton and with the prison at Fort Dix, and they find themselves in the midst of cold-blooded killers and a tangled political conspiracy. All this while Atlee is trying to find her sister. Pine and Pulley's chemistry and effortless teamwork elevate the story from good to bloody good. Jennifer Platt @Jenniferdplatt

Joe Biden's very human story about carrying on as you grieve, a sharp, perceptive and powerful novel drawing on true crime events, and a beautifully ...
Books
2 months ago

A poetic and dreamy literary read, a tour de force of a novel about love and loss, and a dark and twisty thriller from Claire Askew.
Books
2 months ago

The latest Mitch Rapp novel, Louis de Bernières's remarkable 'The Autumn of the Ace', and a domestic noir in which a book club is more than it seems.
Books
3 months ago
Next Article