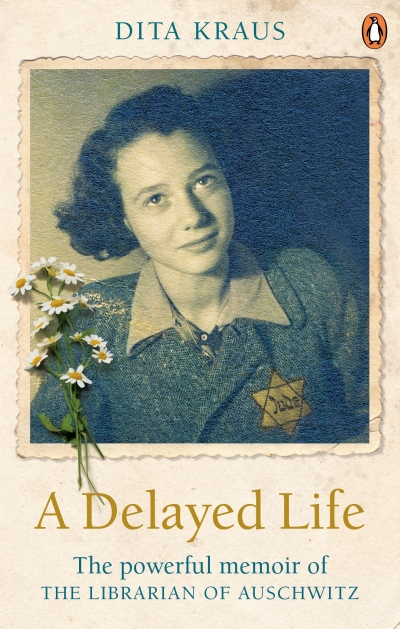 A Delayed Life: The powerful memoir of the librarian of Auschwitz.
Image: Supplied

Born in Prague to a Jewish family in 1929, Dita Kraus has lived through the most turbulent decades of the 20th and early 21st centuries. Here, Dita writes with startling clarity on the horrors and joys of a life delayed by the Holocaust.

From her earliest memories and childhood friendships in Prague before the war to the Nazi-occupation that saw her and her family sent to the Jewish ghetto at Terezín, to the unimaginable fear and bravery of her imprisonment in Auschwitz and Bergen-Belsen, and life after liberation.

Dita writes unflinchingly about the harsh conditions of the camps and her role as librarian of the precious books that her fellow prisoners managed to smuggle past the guards. But she also looks beyond the Holocaust – to the life she rebuilt after the war: her marriage to fellow survivor Otto B Kraus, a new life in Israel and the happiness and heartbreaks of motherhood.

Part of Dita's story was told in fictional form in the Sunday Times bestseller, The Librarian of Auschwitz by Antonio Iturbe. Her memoir tells the full story in her own words.

By telling the story of one family's struggle for survival under the Nazis, this book brings into focus the plight of today's refugees from terror, ...
Books
1 year ago

For its victims the holocaust never ends

This holocaust tale is fraught with the trail of emotions built on lies, writes Tevia Rosmarin
Books
1 year ago

"Eight days had passed since they’d left Auschwitz on this journey."
Books
1 year ago

A significant year, 1947, unfolds in a score of news stories that still resonate today, writes Kate Sidley
Books
1 year ago
Next Article