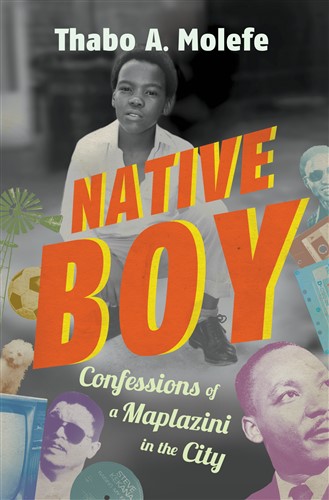 'Native Boy' is an illuminating memoir of a young black man's search for identity.
Image: Supplied

‘When we moved from the farm, my mother was especially concerned about my survival. How would her youngest child survive township life; how would he transform from a maplazini to an urban township boy?’

Thabo Abram Molefe was just six years old when he and his family left their tenancy on a Boschfontein farm. Their destination: a vacant stand in the vibrant, multi-ethnic, rambling Ratanda township just south of Heidelberg, Transvaal - the birthplace of Eugene Terre'Blanche's AWB.

To his new neighbours, Molefe is - and always will be - a “maplazini” Sesotho for “dumb country bumpkin”. It is a nickname he works to overcome as he journeys towards adulthood and further education, far beyond the apartheid regime's agenda to forever limit the black man to a life of hardship.

Funny, moving, heartbreaking and heartwarming: Native Boy is an illuminating memoir of a young black man's search for identity, set against the backdrop of a country in the throes of political transition.

Molefe is an independent consultant and business improvement professional with a deep affinity for South African art and culture. His work spans more than a decade in the local government, oil and gas, logistics, mining and financial services sectors of SA. He holds qualifications in business and technology from Unisa, Wits and Pretoria universities. Molefe is also founder and principal consultant at Vintage Artifact, a consulting services and natural stone processing, design and manufacturing company. This is his first book.

In almost any African township in today’s South Africa, very few things define a man as comprehensively as his proximity to wealth, power and privilege. Some of the highly educated leaders of the Economic Freedom Fighters (EFF) have termed this ideal, so passionately sought after by Africans, ‘whiteness’. On its strength, a man is acknowledged in the townships either as an ingakara, the upwardly mobile man about town, or as an isithipha, the post-apartheid incarnation of the dumb country bumpkin – a maplazini.

Mlungisi Mbhele was the first of the boys in our circle to leave Ratanda for the suburbs. Ironically, Mlungisi had failed his matric exams spectacularly in 1993, sitting for only two of his six subjects, isiZulu and English. Halfway through the English exam, Mlungisi was reported to have stood up and walked towards the front of the class. The other students lifted their heads from their papers, curious as to who it was that was making noise by dragging his feet gratingly on the concrete floor. Most of them were just in time to catch the theatrical performance that soon followed: Mlungisi crumpled both the exam paper and answer sheet to the size of a tennis ball as they watched. Like an American Major League baseball pitcher, he threw it towards the cowering figure of the invigilator and walked out of the classroom in a huff.

For a while after his performance in Khanya-Lesedi’s examination room, we all thought Mlungisi had made a huge mistake. We believed not having a matric certificate would surely present him with difficulty later. I also knew that Mlungisi had a learning disability. Soon after, Mlungisi left dusky Ratanda for the bright lights of Johannesburg to pursue a two-month course in computer literacy at a private college.

In retrospect, we may have been projecting our own brand of meritocratic idealism onto the soon-to-be ingakara. We were not yet aware of the strange political trickery that can transform a matriculant into the COO of a once very mighty public broadcaster. We neglected the fact that two of Mlungisi’s older brothers were by then well-known members of the local ANC. Because of this oversight on our part, Mlungisi’s inexplicable return as a recently employed and visibly successful son of Ratanda caught more than few of us by surprise. His reincarnation as the well-dressed and openly boastful driver of a red BMW Z3 revealed the existence of a secret weapon in the armoury of the new age black South African: a passport granted on the strength of his own or his family’s struggle credentials.

It became clear that Mlungisi’s brothers and, by extension Mlungisi himself, had paid the price deemed in some circles to be a prerequisite for a job in postapartheid and democratic South Africa. In the late 1980s and early 1990s, Mlungisi’s brothers were often central to Ratanda’s major political events. Around 1993, they had lent a hand in strengthening COSAS’ voice in its demands for a school to be built for Khanya-Lesedi’s students. A group of those students, including Mlungisi and all of the boys in our circle, had marched to the piece of land we wanted the school to be built on. At the time, I remember us singing two Sesotho struggle songs.

De Klerk, wait for me just there
If you don’t want to see your mother
When we hit the collaborators
We have forgotten home

On the odd Saturday or Sunday, Mlungisi would visit Ratanda for one or two hours. Like one genuinely interested in the well-being of his former playmates and fellow students, he always asked where so-and-so was. He seemed pleased with the never-changing answers he received: so-and-so was still in Ratanda and worked at the Eskort factory, so-and-so was working as a porter at AG Visser Hospital, so-and-so had been looking for work since leaving school, so-and-so had died of a mysterious but common illness. On almost all occasions, Mlungisi would ask where I was. One of the young boys in the neighbourhood would tell him that I was probably at my house, with my nose stuck in a book. He would always respond by making some off-hand remark about the strange ways in which fate worked.

By the time I had almost completed my studies with Unisa, Mlungisi found it necessary to demand that I be called out of the house to see him. One of the small boys from Blesbok stepped into the living room that I had recently transformed into a study.

‘Bra Mlu is asking for you. He says you must come out now!’ the boy said.

I followed the boy out of the house and into the street, where Mlungisi had parked his BMW at the kerb.

‘How are you, man?’ he asked in English.

‘You know, you know. What are you doing?’

I saw the sudden deepening of a frown that had already begun forming when I stepped onto the kerb.

I could not offer a reply to this last bit of information that he gave me.

‘How are the studies going?’ he continued.

‘I’ve just finished exams for third-year modules. There are two last modules I am left with.’

‘So what happens after the two modules? What do you get then?’

‘I’ll be done with the degree,’ I replied, feeling a little uncertain about the adequacy of my answer.

Sitting next to Mlungisi was a young lady dressed in jeans and a black and white polka-dot blouse. Time and again, she would lift her finger to reposition the long strands of synthetic hair that fell over her eyes. She would then flick her head back, and use the recently freed hand to shade her face from the sun’s rays. Her impatience with her designated driver seemed to grow with each consecutive hand-head-neck movement that she made, which happened every two minutes.

‘Haai! Mlu, I am getting burnt here. A person will end up becoming too dark!’ she complained.

‘Why are there no trees here?!’ Mlungisi asked me, getting a little agitated.

Since the first time he returned, Mlungisi was said to have added the absence of trees to his litany of complaints about Ratanda. A renewed resentment of this lack of cover around our township seemed to come over him at the mention of sunburn and his passenger losing her fair complexion. Among his list of grievances, Mlungisi had also expressed his dislike for quite a few of the young men from Blesbok Street and Vezinyawo as a whole, including Duma. He explained how, lately, he found it especially difficult to live with the possibility that some of these boys might want to reignite their friendship with him. He worried that, one of these days, he would be forced to accept an unsolicited visit from one of them at his Randburg flat.

"This book was inspired by a deep desire to be in conversation with the country that has defined who I am."
Books
1 year ago

Being born in Taiwan and raised in South Africa can make for a confusing identity, writes Michele Magwood
Books
2 years ago