How Western Cape farmers are being hit by the drought 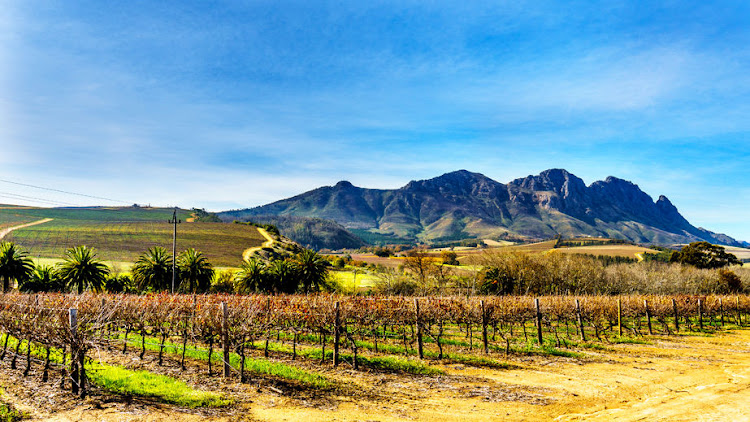 Vineyards in the wine region of Stellenbosch in the Western Cape of South Africa with Simonsberg in the background. File photo.
Image: 123rf/ Harry Beugelink

Much has been written about the ongoing drought and critical water shortages in the city of Cape Town. Residents are bracing themselves for Day Zero – the moment at which most of the city’s domestic taps will run dry.

But there’s also a great deal to worry about beyond the city’s limits and deeper into the surrounding farmlands of the Western Cape. Agriculture is an important part of the province’s socioeconomic fabric. The sector contributes 2% to South Africa’s national GDP, more than a fifth of which  comes from the Western Cape.

The province’s major commodities are horticulture – fruit, wine and vegetables. It also produces livestock, meat and dairy; and field crops like wheat, barley and canola. All need water – and lots of it.

Agriculture is an important part of the province’s socioeconomic fabric. The sector contributes 2% to South Africa’s national GDP, more than a fifth of which  comes from the Western Cape.

Agricultural water is allocated to individual farmers annually on the basis of crop type and area planted. It is given for use if and when the farmer chooses, during and after the growing season.

There’s a real risk that the water shortage could see farmers’ yields decimated during this growing season which is from September to March for irrigated crops, and from from May to October for rainfed crops. The long term impact could also be disastrous. Consecutive loss-making years could bankrupt farmers leading to many abandoning agriculture entirely. And as research elsewhere has shown, it could lead to suicides.

In periods of water stress, farmers need support, research assistance and empathy from governments and competing water users. Other countries provide examples of how this can be done.

Australia’s Millennium drought was categorised by low rainfall conditions in late 1996 and throughout 1997 in southern Australia. It included some of its largest cities and agricultural regions. The drought worsened through 2001 and 2002, followed by the years 2006 to 2008 which were the driest on record. Conditions remained hot and dry through to early 2010.

The drought had a severe impact on irrigated agriculture. Farmers in the region relied solely on water from dams for agriculture and domestic consumption.

The social impact on rural communities included unemployment and loss of household income, diminished local businesses and services and recreational opportunities as well social consequences. The drought also changed the way Australian agriculture treated its water resources, and those who depended on them.

Tipplers in the drought-stricken city of Cape Town will now have an opportunity to play a role in helping to conserve water with the introduction of ...
Lifestyle
4 years ago

In 2017 there were 215 000 employees in the agriculture sector in the region, an estimated 75% were seasonal workers.

Seasonal workers in South Africa usually settle in the production area, often in informal settlements. Their earnings result from work during the harvest period which stretches from between one month to three. In many cases the earning period must sustain them for the rest of the year. Whole families are dependent on this income and any job losses can have a severe impact including food insecurity, delinquency, alcohol and drug dependency and crime, as well as lack of self-esteem and domestic violence.

Significant job losses in the agricultural sector could also lead to considerable social unrest, as happened in the past.

Impact of the drought

The drought has already begun to affect how farmers use water. Some of the behaviour changes are worrying. For example, farmers have started hoarding water when it’s available. Some aren’t in a position to store enough water and are withdrawing more than normal for this period (but still within their overall allocation) in the expectation that a post-harvest irrigation will not be available.

But there have been some positive developments too. Some farmers with adequate and even spare water in their own dams have volunteered to donate this to the city.

But the lack of rain has already led to lower crop production which has meant that fewer workers are needed.

In many areas production volumes of wine and fruit are expected to fall by 10%-30%. During the Millennium drought, Australia’s agricultural production levels fell drastically.

But it is worth noting that the industry in Australia made a full recovery during the relatively wet period after the drought.

So far the damage to trees and vines in the Cape has been limited. While the horticulture industry will suffer economic losses, the industry will recover, if not immediately, then over a few seasons if water for irrigation is restored by next September. It is, however, too soon to say what the long term impact will be in terms of soil quality, farmer confidence and water allocations.

Most domestic users are able to curtail their use of water without affecting their livelihood significantly. But the agricultural industry is completely dependent on an equitable share of this resource.

A very fine equilibrium between accountable water allocation and responsible use of the limited resource is needed for the two competing sets of users. This requires empathy, negotiation, compromise and carefully considered trade-offs, all undertaken with Solomonic wisdom.

-This article was first published at The Conversation.

The R6-billion allocated by Finance Minister Malusi Gigaba for drought relief and infrastructure is a drop in the ocean‚ Western Cape Premier Helen ...
Politics
4 years ago