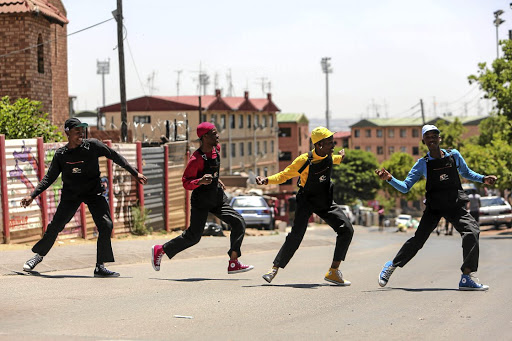 To Americans they might look like South Africa's dancing Power Rangers, but to the people of Alexandra, Johannesburg, they are local celebrities.

Members of the pantsula dance crew Via Vyndal are gearing up to perform in New York. Sandile Ngqulunga, 24, Kagiso Ngqulunga, 21, Daniel Chaka, 22, and Bafana Binde, 25, will be performing the US premiere of The Children's Monologues.

WATCH: This gogo dancing to Washa is everything!

Actress Ntando Duma shared the cutest video of a gogo dancing to Babes Wodumo's hit track, Washa, that will make your day.
TshisaLIVE
3 years ago

Boyle held auditions for local pantsula dancers earlier this year and the Alexandra crew were chosen. Chaka said he cried when he heard the news. Sandile Ngqulunga said they were "elated" because none had ever left the country to perform.

Hoping to change the negative perspective of pantsula dancers, he said: "People who don't understand what we do think we vandalise, but we don't. The only time we do that is on stage when we dance."

Sicelo Xaba, their artistic director and founding member of Impilo Mapantsula, an organisation that supports pantsula dancers in South Africa, said: "This is not just important for the guys going, it's also important for pantsula as a culture and a dance form."

WATCH | The Via VYNDAL dance group in action

While Via Vyndal are mesmerising the audience in New York, the youngsters who wrote some of the stories will be performing their monologues in Rammulotsi, Free State.

Beth Wells of creative arts charity Dramatic Need said the project started with more than 1,000 essays from children about "A Day I Will Never Forget". These were whittled down to 15. Proceeds from the fundraiser will go to Dramatic Need.