Steve Harvey reveals how he went from broke to balling 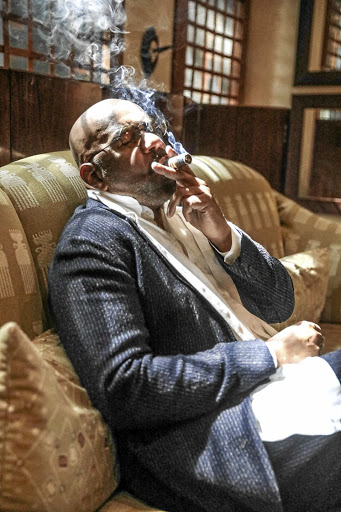 Steve Harvey believes the best things in life are on the other side of your fear.
Image: Sebabatso Mosamo

Steve Harvey is no Van Gogh, but a hotel notepad filled with doodles suggests that the comedian, author and television host enjoys a little distraction during obligatory interviews.

His eyes pierce over his octagon lenses, his impassioned regurgitation of his love for Africa and its people tell of a long-distance love affair with the continent that goes back to his adolescence.

But before he was one of the world's most recognisable celebrities, Harvey was homeless and living in his car. Having realised that he had the ability to make people laugh, Harvey quit his job in the '80s to pursue his dream of becoming a comedian. The pursuit of his dream saw him using a cooler box as a refrigerator and public bathrooms to wash.

We spoke with the comedian at the Saxon Boutique Hotel in Sandton, while he was in Joburg to launch a local version of the hit US family game show, Family Feud, and found out how he went from broke to balling [possessing an abundance of money].

What were the distinguishing factors in your life that took you from being homeless in the '80s to where you are today?

Vision and imagination. If you don't have dreams or visions you just die on the vine. You turn from a grape to a raisin right there in the sun. But you've got to see yourself somewhere else. Somebody imagined flying one day, now people get on planes all the time. Somebody got tired of walking, we got cars. Somebody was talking on the phone and it was connected to the wall and they said, 'Man, I wish I could take this phone outside' now everybody has a cellphone.

Was there a point you wanted to give up?

Of course, everybody on the road to success considers turning back. The sad part of it is 95% of people do. I was homeless and living in a car. I said, man this is too hard, I should go home and ask my dad if I can stay at the house for six months and find a job, I almost gave up.

The unexpected price of fame?

Fame now is an ugly business, there's almost no upside to it, that's the unexpected pain of fame. You have no privacy. It's like living in a big pretty prison. I'm staying here at this hotel, it's gorgeous, guess what, I can't go anywhere, I can't go to the mall. I can't take my grandkids to Disneyland, I can't go to the park or a movie theatre. The last movie I took my family to, I had to buy every seat just so I could go watch Aladdin with my grandkids.

Steve Harvey lights a cigar and smoke fills the private lounge. He peeks over his amber-tinted glasses and complains that fame has become his prison.
Lifestyle
1 year ago

What was an ordinary moment that turned out to be profound?

We were at a restaurant in Cannes on an island. The only way to get to the restaurant is by boat. They don't have water taxis. So it's just a baller restaurant. It's just the upper echelon people. I'm sitting there, we're having a good time; they got a little band that goes around to the tables. I've been in there for a while, people are speaking to me. All of a sudden the DJ starts playing the theme song to Family Feud. Everybody applauded and pointed at me, I waved for a minute and then the emotion struck me. Wow. And I had a hat on and I just bent down and I couldn't stop crying because how did this little dude from Cleveland, Ohio, get to the south of France and they are playing a theme song and everybody in the restaurant knew who I am.

As a child your mom used to buy travel magazines, what was the first place you looked at and later ended up going to?

I was fascinated by Africa because I wanted to see lions, but that's not the first place I went. I didn't travel until I married Marjorie because I was a hood boy. I thought if you had money you should go to Vegas. I didn't see no other reason to take my money nowhere but Las Vegas. You can smoke cigars indoors, you can gamble, you can stay up all night, you can drink. It's sin and debauchery in Vegas. I'm in. I married Marjorie. She says, 'No. I want to go to the south of France.' So for our first anniversary I took her to the south of France. We've been to so many places now but I wanted Africa in that magazine. My favourite vacation is a beach vacation, but the Okavango Delta, man, it was breathtaking.

Get your game face on!
TshisaLIVE
1 year ago