I'm gobsmacked that Meghan wanted a photo with me for Michelle Obama, says NMU student 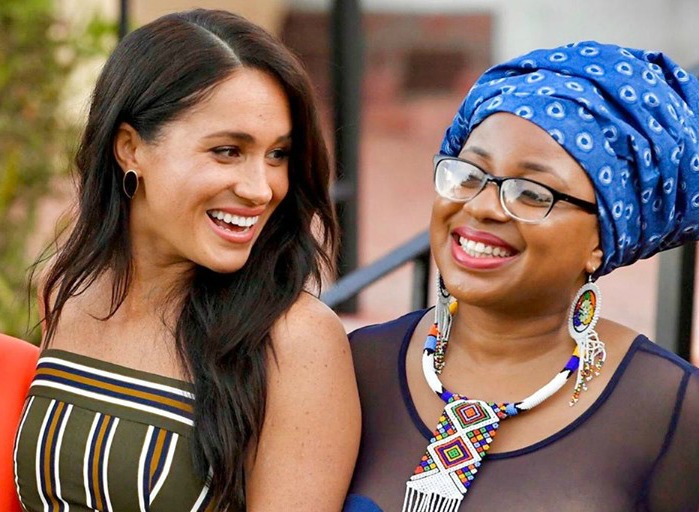 Meghan, Duchess of Sussex, with Sithembele Ncube, a Nelson Mandela University student, at a reception for young people, community and civil society leaders at the residence of the British High Commissioner on September 24 2019 in Cape Town.
Image: Facundo Arrizabalaga - Pool/Getty Images

In a complete role reversal, the Duchess of Sussex asked a Nelson Mandela University student and her friends to pose for a picture with her so she could send it to her friend Michelle Obama.

“I still cannot believe it,” Sithembele Ncube, 25, said after her royal encounter with Meghan, who is married to Prince Harry, Queen Elizabeth’s grandson and sixth in line to the British throne.

Ncube met up with the royals in Cape Town on Wednesday during the pair’s first tour in Southern Africa.

“She just asked to take a picture with me to send to Michelle Obama [wife of former US president Barack Obama],” Ncube said.

Yesterday myself and some of the Obama Foundation Leaders based in South Africa had the opportunity to be at a reception...

Ncube, a computer science honours student, belongs to the Obama Foundation, which strives to inspire, empower and connect people to change the world. She's been part of the organisation since the start of 2019.

“The royals had invited a few youth organisations to meet them and I went as part of the African Leaders initiative [part of the work of the foundation],” said Ncube, who attended a reception for Meghan and Prince Harry at the British High Commissioner's residence in Cape Town on Heritage Day.

What stood out the most for me was how thoughtful, kind and approachable [Meghan] was – talking to her felt like I was talking to my big sister

Asked how she had felt when meeting the duchess, Ncube said she was simply lost for words.

“What stood out the most for me was how thoughtful, kind and approachable she was – talking to her felt like I was talking to my big sister.

“She just asked to take a picture with us so she could send it to Michelle.

“I was gobsmacked because I am a huge fan of Michelle as well,” she said.

Ncube said she would never forget the experience.

“Meghan really has a passion for women and women’s issues.

“She made it a point to talk about the importance of centering women in the development of Africa in order to make a positive impact.”

Ncube joked that Michelle Obama could be the next well-known person she would meet.

Thank you to my friend, Her Royal Highness The Duchess of Sussex @sussexroyal, a thoughtful leader who is breaking the mold and making our world better for it. Whether meeting with our @ObamaFoundation Leaders or helping girls around the world seek the education they deserve, she is an inspiration to so many.

The British royal couple and their son Archie began their royal tour of southern Africa in Cape Town on Monday.

They arrive in Johannesburg next week where they'll meet with Graça Machel, widow of Nelson Mandela, and President Cyril Ramaphosa before ending their tour on October 2.

'We are with you': Meghan's message to Uyinene on a yellow ribbon

These are the words, written in isiXhosa apparently by Meghan Markle, the Duchess of Sussex, on a yellow ribbon tied to the railing at the post ...
News
1 year ago

A scorching sun and a three-hour wait did not dampen Catherine Arzul’s determination to give the Duchess of Sussex a bouquet of flowers on Wednesday.
Lifestyle
1 year ago

Meghan, the Duchess of Sussex, has kept her look fairly casual during her royal tour of Cape Town, but she glammed up for a garden reception at the ...
Lifestyle
1 year ago