The late Joseph Shabalala heard voices in his dreams telling him how to make music. He listened and, with his group Ladysmith Black Mambazo, produced the stuff of legend 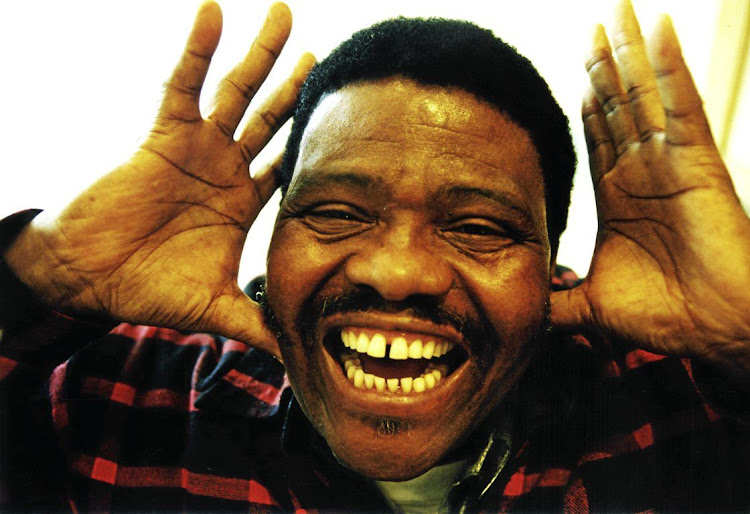 Joseph Shabalala in 1997. His a cappella group, which sang mainly in Zulu, won five Grammy awards under him.
Image: Elizabeth Sejake

Every night for six months a group of children dressed in robes would visit Joseph Shabalala and sing to him in his dreams. Their words were incomprehensible, but their harmonies would become the foundation Shabalala used to form Ladysmith Black Mambazo.

On February 11 they visited Shabalala again, to call him home. He passed away, at the age of 78, after a long illness.

The ceremony will be held this Saturday.
TshisaLIVE
1 year ago

He grew up on a white-owned farm called Tugela with his six siblings. His parents, Jonathan Mluwane Shabalala and Nomandla Elina Shabalala, worked on the farm.

In the late ’40s Joseph’s father died. Ten years later, at the age of 17, Joseph had to earn a living. His few options as a young black man in apartheid SA were to continue working on the farm or leave and find work at a mine or in a factory. He left for the city.

When he arrived in Durban he found work at a factory. The city was also where the legendary musician would find his passion for music. He started singing with a group known as the Durban Choir. 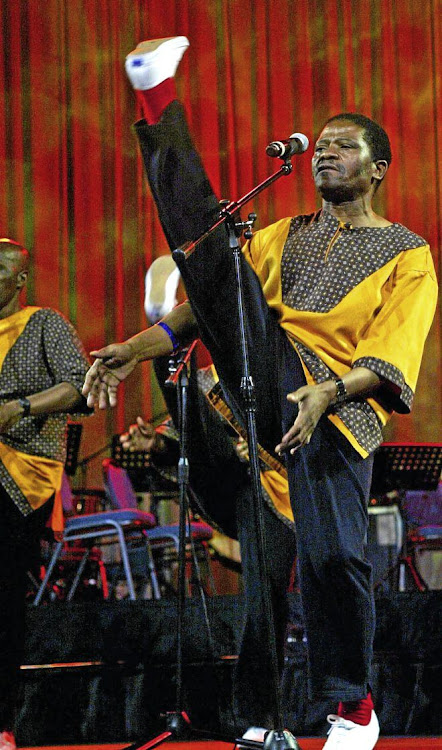 Later he joined the isicathamiya group The Highlanders, singing a genre of traditional music that originated on the mines. Zulu music involves dancing with a lot of stomping and clapping, but mineworkers living in mine hostels were not allowed to make noise, and would tip-toe as an alternative. “Isicathamiya” is derived from a Zulu word meaning to walk softly.

It was in the 1960s that the mystical dreams began. Mshengu, as he was known, tried to teach The Highlanders what he’d heard in his dreams but they said it was too difficult. He left and formed his own group, Ezimnyama. Refining the isicathamiya style using the sounds he heard in his dreams, Shabalala developed a unique a cappella style based on bass-heavy harmonies and call-and-response phrases of loud and soft verses.

The group was later renamed Ladysmith Black Mambazo, a name that pays homage to Shabalala’s home town. The “black” refers to oxen, a nod to his farm roots and the strength of cattle. “Mambazo” is a Zulu word for axe, and represents the group’s strength and vocal ability.

FOLLOWING IN HIS FOOTSTEPS

It was 3am in Los Angeles and his cousin and Ladysmith Black Mambazo member Albert Mazibuko had just heard the news that Mshengu had died.

“We were only 30 minutes away from our hotel when the tour manager woke me up. Then I knew it must have been important and I knew it was Joseph. They took me to a room and told me. My heart just sank. I’m trying to be strong, I know he’s in a better place, he was sick. He was a very strong man, he fought a good fight,” said Mazibuko.

Mazibuko was 10 years old when he first saw Shabalala singing and he decided that he, too, would be a singer.

“He said he felt people looked down on isicathamiya music, like someone who sang it wasn’t educated. He said, ‘I’m here in this world to make things that are wrong, right’. He said, ‘Let’s do something about the way people see isicathamiya. Let’s take something that people don’t seem to care about and let’s make them care and let’s make it better’,” said Mazibuko.

Joseph said, ‘Let’s take this music, isicathamiya, and make it better and then let’s take it to the world'

As a youngster, Mazibuko set off to Durban to find his cousin with the aim of joining the group.

“In 1969 … he came to my father, his uncle, and said, ‘Baba, I’m here to ask permission to allow these boys to join me in music’. It was me and my brother Milton. I was so happy, I said, ‘Wow, my dream has come true’. Joseph said, ‘Let’s take this music, isicathamiya, and make it better and then let’s take it to the world’.”

After their first airplay on Radio Zulu in the 1970s the group performed live in Johannesburg. They landed a recording contract with Gallo Records and released their first album in 1973.

Shabalala and some of the group’s members converted to Christianity and began to incorporate this element into their music. This was also the result of a dream.

“He was very spiritual, from a cultural sense, but also more so when he became a Christian in 1975. He woke up in the morning and said someone told him to stay away from food for four days. This person said if he succeeded in this he would conquer all his enemies, but if he failed, his enemies would conquer him. He did it. I was amazed he was so strong. A month later he would read the Bible all the time,” said Mazibuko.

In the early ’80s Ladysmith Black Mambazo toured Germany, where US singer-songwriter Paul Simon spotted them. In a radio interview in 2003, Shabalala spoke about meeting Simon in Johannesburg. 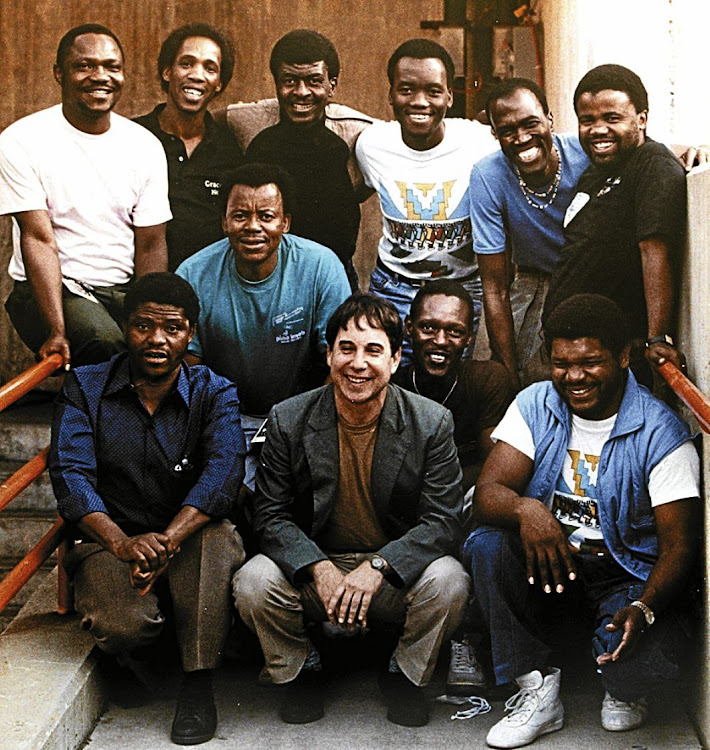 “I was surprised that he knew my name. He said, ‘I want to tell you something, I’m your fan, I want to do something together with Ladysmith Black Mambazo’. “I left him there and went back to my guys. I said, ‘I hugged him, that was my first time to hug a white guy’.”

The group went on to collaborate with Simon on the 1986 Graceland album, which featured songs like Homeless and Diamonds on the Soles of her Shoes. Simon produced the group’s first worldwide album, Shaka Zulu, for which they won their first Grammy award in 1988 for Best Folk Recording.

They also collaborated with Dolly Parton, Josh Groban, Emmylou Harris, Stevie Wonder, Sarah McLachlan and Melissa Etheridge, among many others.

Mazibuko recalls being on tour with his cousin.

“We used to share a room on tour and he never sleeps, he is always singing. He would wake me up in the middle of the night to listen to his new songs.

“He was a hard worker, he worked all the time. He was also a perfectionist. He wanted everything to be done right,” said Mazibuko.

In May 2002 Shabalala’s wife of 30 years, Nellie, who was a singer and a pastor, was shot outside their home in Clermont, Durban. Joseph was injured in the attack as he chased the gunman. Nellie, who was 49 at the time, died. Six months after the tragedy Shabalala married Thokozile Maduna. 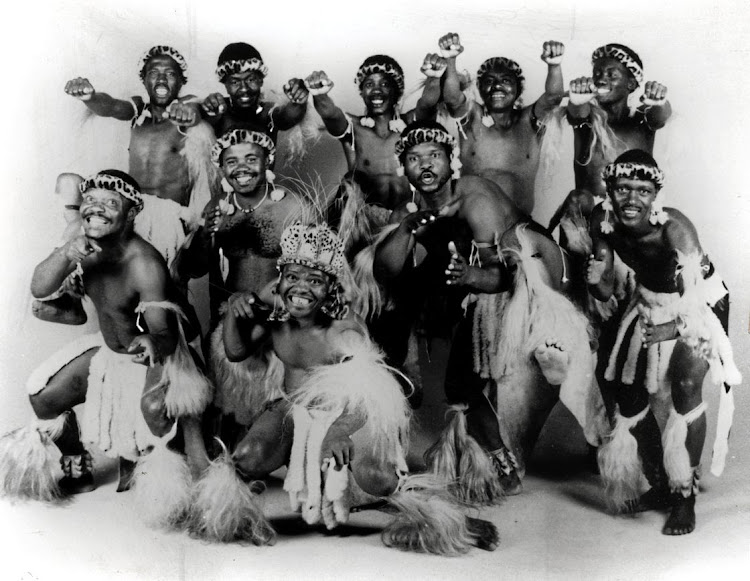 Shabalala announced his retirement from the group in 2014. He handed over the leadership baton to his sons.

“He said, ‘My brother, now I’m going to retire’. He said he would anoint his sons to take over, he said he trusted me to guide them. They knelt before him and he anointed them, he laid his hands on them and said please take this group to greater places,” said Mazibuko.

Shabalala’s health deteriorated after surgery on his spine.

Former president Jacob Zuma travelled to Ladysmith in 2017 to visit Shabalala and to unveil a plaque at the Dr Joseph Shabalala Secondary School. At the event, Zuma said it was Ladysmith Black Mambazo’s music that had kept him entertained while he was in prison on Robben Island.

In April last year President Cyril Ramaphosa visited the Shabalala home in Ladysmith to congratulate him on the longevity of the group. On the day, Ramaphosa said: “To be at the feet of a giant like Baba Shabalala, we feel privileged to be able to come and pay our respects to him as he is now retired.”

Mazibuko recalls his last conversation with his famous cousin, in August 2019.

“When I saw him I greeted him with his Shabalala praise names. He sang and then we sang together. I don’t remember the song. He sang two lines of a new song for me. Joseph was always singing.”

In December Shabalala was admitted to hospital in Durban before being transferred to Gauteng. He died at the Life Eugene Marais Hospital in Pretoria, with his wife Thokozile by his side.

He is survived by her and his four sons.

Ladysmith Black Mambazo received the news that founder Joseph Shabalala had died just as they were about to perform in Chicago during their tour ...
TshisaLIVE
1 year ago

'Baba Joseph Shabalala we stand on your shoulders and your music will live forever,' says the Ndlovu Youth Choir
TshisaLIVE
1 year ago