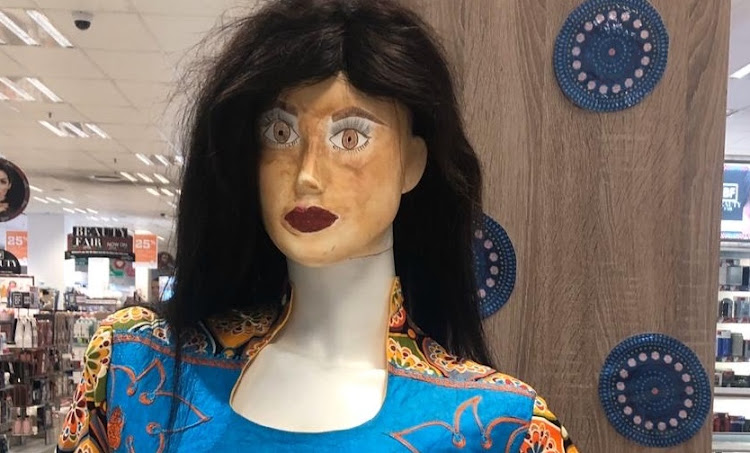 This mannequin was photographed in the Killarney Mall branch of Dis-Chem on February 21 2020.
Image: Staff reporter

The white mannequin, which had been dressed in an African-print dress and had its face tinted with make-up, appeared as part of an “unauthorised” display promoting the brand's annual beauty fair. 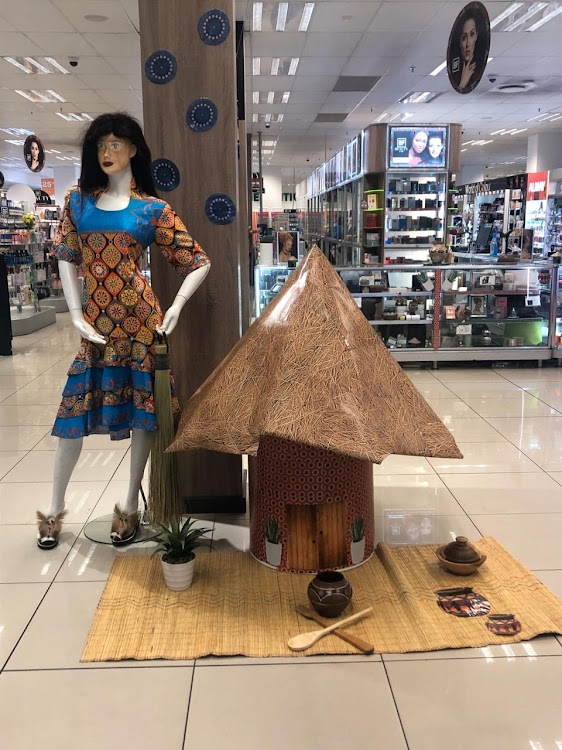 This 'African-themed' display was photographed at the Dis-Chem store in Killarney Mall, Johannesburg, on February 21 2020.
Image: Staff reporter

Tarryl Moonsamy, store manager of Dis-Chem Killarney Mall, told 702's Eusebius McKaiser that the display, which also featured a rondeval and African kitchenware, was produced by an unnamed black woman staff member on her own initiative with the idea of creating an “African beauty fair” theme within the store.

Moonsamy said the woman had brought in the mannequin to use as a prop, clarifying that Dis-Chem did not use mannequins in its displays.

Moonsamy explained the mannequin's “bad make-up", saying, “the staff member ... wanted to embrace her own culture and she wanted to bring something about herself into the display, which definitely went wrong".

“The minute I saw it, I removed it because the make-up had been done so badly,” she said.

Moonsamy told McKaiser that she didn't accept that the display was "black face" because it was not intended to “make any mockery of anybody”.

“The whole term 'black face' and the meaning behind it is completely different to what actually happened."

Dis-Chem confirmed that mannequin was an “isolated incident” in an apology the brand posted on Twitter last week.

'It was an isolated incident': Dis-Chem apologises for black face mannequin

Dis-Chem has issued an apology for the black face mannequin which appeared as part of an "unauthorised" display promoting the brand's beauty fair in ...
Lifestyle
1 year ago

Pharmacy chain Dis-Chem has landed itself in hot water over a "black face" mannequin that appeared as part of a display in the Killarney Mall store ...
Lifestyle
1 year ago

From Prada and Gucci to Burberry: designer brands who've been caught up in public outrage.
Lifestyle
2 years ago