R1.4-million muse: a closer look at the Cape beauty painted by Tretchikoff

Vladimir Tretchikoff's 1974 'Portrait of Ellen Peters', which has a uniquely South African history, recently sold above estimate at auction 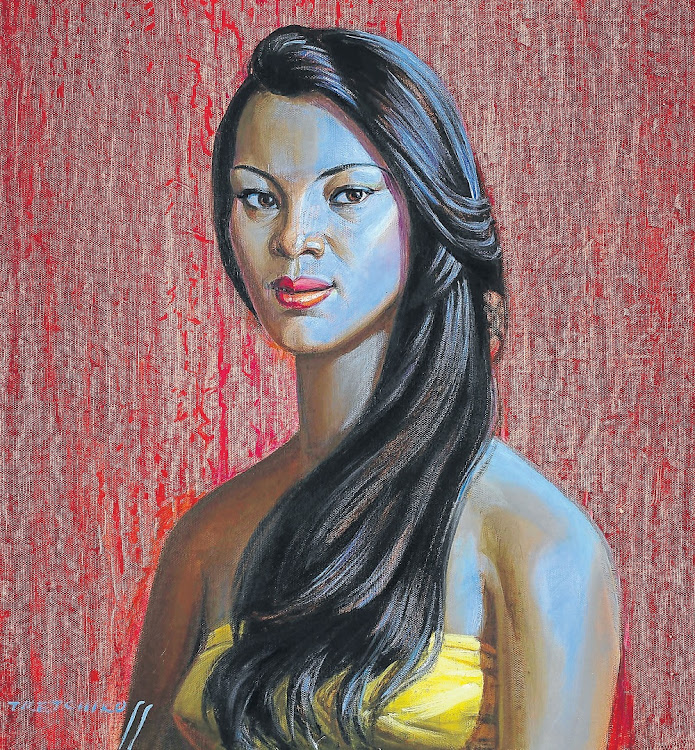 On Monday, auction house Strauss & Co brought its treasure trove into living rooms across the country, allowing art lovers to virtually bid on valuable pieces from the comfort of their armchairs.

Among them was Vladimir Tretchikoff's 1974 Portrait of Ellen Peters, which sold for R1.4-million — R200,000 above the highest estimate.

It's a painting that has a uniquely South African history:

In 1973, Ellen Peters, a teenage secretary from Kensington, Cape Town, was proclaimed Newsmaker of the Year by the Cape Press, Radio and TV Club. To celebrate the occasion she appeared at their ball, a rare multiracial event, with other heroes of the day.

Among them, mixing with the city mayor, the captain of the provincial rugby team and the queen of South African ballet, was the country's wealthiest artist, Vladimir Tretchikoff.

Peters, in her silver sequinned dress, caught his eye. That year the girl from a coloured suburb won the title of Miss Africa South. It was the non-white equivalent of Miss South Africa.

The newly crowned beauty queen represented her country at the Miss World pageant and reached the semifinals. She saw London and New York and socialised with Gregory Peck and Engelbert Humperdinck.

Artist-led exhibition spaces are proof of our local players' capacity for innovation and collaboration, which is just what's needed in a ...
Lifestyle
2 years ago

Tretchikoff had a multiracial ideal of female beauty and was so impressed by Peters that he asked her to sit for this portrait. Her ancestors came from Scotland, France and Indonesia. Her grandfather was Jewish. Peters had a very intercontinental look.

Her portrait by Tretchikoff belongs to the same tradition as his famous Balinese Girl (1959). It is a view of a Western onlooker admiring female beauty and being fascinated with visual expressions of Asian culture which complement that beauty.

Sitters for his Balinese portraits, made in the 1950s and onwards, were South Africans of mixed ancestry, like Peters. This work is set apart from the Balinese series by an absence of accessories: no heavy traditional earrings, no headscarf.

Even in Tretchikoff's portraits of fruit-and-vegetable sellers, the models' heads are covered.

The Peters portrait is set apart from Tretchikoff's Balinese series by an absence of accessories: no heavy traditional earrings, no headscarf

Still, Peters is clearly a modern girl, with her confident gaze, bold make-up and long hair hanging loose. Her complexion may be bluish, like that of Tretchikoff's famous Miss Wong or Chinese Girl, but it was purely an aesthetic choice for the artist.

There's no timelessness in Peter's look, no combination of the archaic and the new that we find in his most popular studies. The girl in this painting is obviously Tretchikoff's contemporary.

Tretchikoff's sitter was confident enough to change her life dramatically in the following years. Peters met an Israeli businessman and converted to Judaism. Her happy marriage lasted three decades. After the death of her husband she returned to Cape Town.

Ilana Skolnik-Kazarnovsky, as she is known today, is a motivational speaker, who has shared her story of spiritual transformation with Jewish women around the world.

• For more information on the auction, visit straussart.co.za

Folklore and children’s stories are brought vividly to life through inspired characters and retro references in this Cape Town-based artist's work. ...
Lifestyle
2 years ago

Thenjiwe Niki Nkosi tells Anthea Buys about her powerful solo show, 'Gymnasium', and why she refuses to pander to the 'alien narrative'. Check out ...
Lifestyle
2 years ago