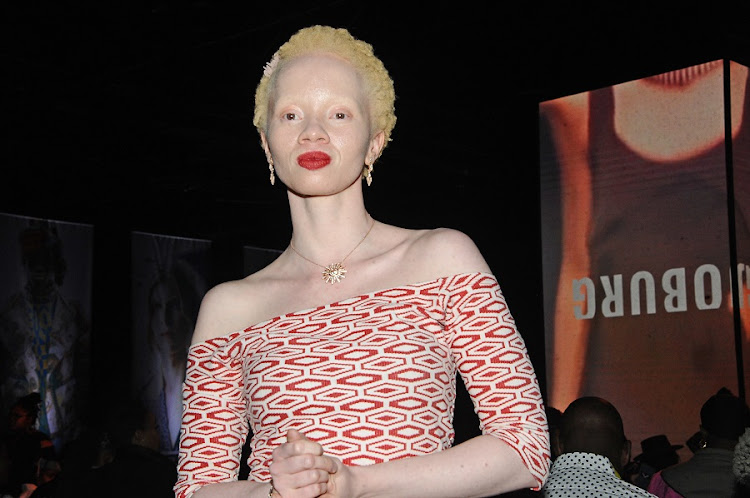 Model and activist Thando Hopa is a lawyer by profession, and she uses her platform to dispel false information about albinism.

Hopa was headhunted by South African fashion designer Gert-Johan Coetzee to model for his clothing line.

At the age of 31, Hopa has had numerous achievements, one of them being selected to be the first woman with albinism to be featured on the cover of Vogue magazine.

TimesLIVE reported that the international magazine wanted to honour the African continent by having the South African model on the cover of its 2019 Portuguese edition under the theme “African Motherland”.

There are numerous damaging misconceptions about albinism in Africa. In some parts of the continent, those with the condition are hunted down and even killed because of false believes that their skin possesses special powers to make others wealthy. This prompted Hopa to help educate people about the skin condition.

During an interview with Top Women in 2018, Hopa went into great detail about some of the challenges and stigmas she has faced as a result of having albinism.

“It was the contradictory beliefs that people with albinism bring either good or bad luck. Having people hug and hold me for good luck, or conversely spit into the necklines of their tops to ward off bad luck, or make a big show of not wanting to touch me for fear of becoming like me, or having children who are like me.

“I felt like a walking commodity, struggling to find words to explain how ordinary I am.”

Lawyer, model and activist Thando Hopa has made history by becoming the first woman living with albinism to appear on the cover of Vogue.
Lifestyle
2 years ago

The BBC has released its 2018 list of the 100 most influential and inspiring women from around the world.
Lifestyle
2 years ago

It was important to be cast as a black woman: Thando Hopa on Pirelli calendar