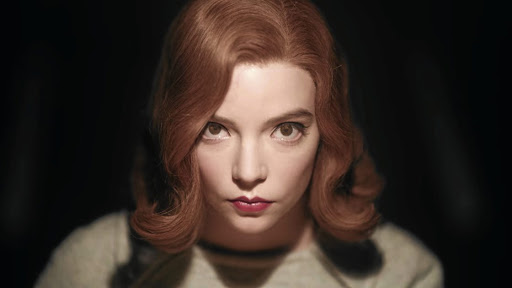 Based on a novel by Walter Tevis (The Hustler, The Man Who Fell to Earth and The Colour of Money), Scott Frank's seven-part series adaptation of this chess-prodigy tale, The Queen's Gambit, breathes new life into the genre of films about preternaturally able but deeply troubled genius players of the world's oldest game.

It does this through a compelling performance from lead actor Anya Taylor-Joy wondrously realised period detail and a script that manages to balance intense emotional examination of its protagonist with a sharp awareness of the obstacles placed in her path by her inner demons, society and the period in which she makes her bid for the crown.

When we first meet her, Beth Harmon (Taylor-Joy) is a recently orphaned girl who doesn't fit in at the orphanage where she's sent after the death of her mother. That's until, under the guidance of the basement-dwelling janitor Mr Shaibel (Bill Camp), she finds solace in the intellectual comforts of chess, a game she soon demonstrates an awesome aptitude for and one that quickly becomes the centre of her life.

As Beth's life evolves through turbulent late-'60s America, little around her seems to intrude on her dedication to the game and beating all the smirks off all the faces of the legions of patronising men who stand between her and chess glory.

Along the way she'll sabotage herself at every turn through drink and sex and other means of trying to stave off the aching loneliness that's been part of her life since childhood. But she'll also become the fascinating object of unobtainable wonder to many intrigued men looking to become her chess mentors and perhaps show the world that, in spite of everything, she's still capable of fulfilling the promise of the one real gift she's being given in this cruel and Cold War paranoia-cloaked world.

The chess is thrilling and the settings beautifully realised but it's the humanising performance from Taylor-Joy that lifts the series. It shows the continued dedication of the story to the broader examination of how anxiety and trauma can create the mysterious circumstances for the realisation of genius, but also lurk in the background threatening to destroy it at any moment.

It's not just about the many riveting battles on the board but the also the many battles raging within Beth. At the series' conclusion we're thrown back to earth with a cheesy but intelligently executed realisation that the playing of the game, both in chess and in life, is greater than its result.

• 'The Queen's Gambit' is on Netflix.

'Dexter' fans rejoice, fresh episodes of the serial killer drama are on the way

'Dexter', one of America's best known TV serial killers, is making a comeback.
Lifestyle
1 year ago

This multi-layered series, which examines sexual mores in the millennial age, will give viewers a lot to think and talk about
Lifestyle
1 year ago