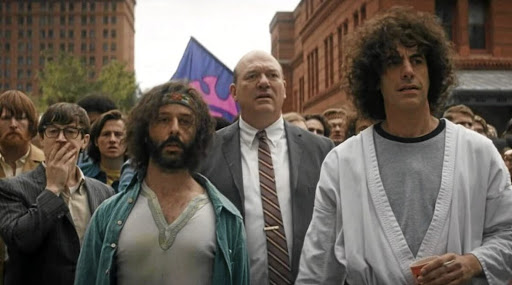 Aaron Sorkin's fast-talking political dialogue and sharp wit have never better been suited to a subject than they are in his new film The Trial of the Chicago 7.

It's one of the most famous moments of 20th-century People vs The Man standoffs: the bloody street battles between anti-Vietnam war protestors who arrived in Chicago in 1968 determined not to allow the Democrats to nominate pro-war candidate Hubert Humphrey and the grimly determined brick-shit-house police enforcers of the city's notoriously conservative and pro-establishment mayor Richard Daley.

The unrest was captured on TV and broadcast into millions of homes over a few tumultuous days in August of that year. It came soon after the assassinations of Martin Luther King and Robert Kennedy, and there was also the ever increasing footage of the failure of the US in Vietnam as well as Daley's police state response to the thousands of peaceful protesters who were united by their determination to bring an end to the war.

When Richard Nixon came to power the following year on the back of a major win for his conservative "silent majority", his administration hadn't forgotten about the embarrassment that the protesters with their repeated chants that "the whole world is watching" had caused in Chicago.

And so Nixon's AG, John Mitchell (John Doman), orchestrated a show trial of the leaders of the movement in an effort to put paid to their rabble rousing.

In this action film, director Spike Lee sets the record straight on African-American participation in the Vietnam War, its legacy and its aftermath ...
Lifestyle
1 year ago

'THE WHOLE WORLD IS WATCHING'

If events on the streets had been an embarrassment for the US government, what happened during the trial was even worse. Bolstered by major support for the defendants, who brought back "the whole world is watching" chant to the steps of the courtroom, the defendants became the heroes, much to the annoyance of Mitchell.

They were only helped by the authoritarian decisions of the trial's overseer Judge Julius Hoffman (Frank Langella), who at one stage had Seale bound and gagged before he was forced to grant him a mistrial.

Sorkin's screenplay, which displays his signature mix of back and forth dialogue, sharp dissection of political ideas and a controlled hopefulness in the idealism of American democracy, is successfully positioned as a piece of recent historical enactment that has one eye firmly on the present American moment.

WATCH | 'The Trial of the Chicago 7' trailer.

As Seale explains to Hayden, there's a vast difference between protesting against the strict rules of your establishment fathers and fighting against a system in which ropes were hung on trees to lynch black people.

The film cuts between the trial and Hoffman's nightly stand-up comedy-like retelling of events and then moving back onto the streets of Chicago during the riots with convincing effect. It may take some dramatic licence with regard to certain characters and events but there are other depictions within popular culture that can provide those - including Norman Mailer in Miami and the Siege of Chicago and the 2007 documentary The Chicago 10.

Sorkin's version still manages to provide a solid piece of well-executed and excellently acted courtroom political drama with an intelligent understanding of how, in spite of the five decades that have since passed, so many things remain rotten in the state of America.

Emma Thompson shimmers in dystopian drama that delights and terrifies

Leonie Wagner talks to the acclaimed director about family, racism and his latest film, which highlights the role of African-American soldiers in the ...
Lifestyle
1 year ago

In this Netflix documentary, industry insiders lay bare the dangers of social media; we asked local experts to weigh in
Lifestyle
10 months ago