From autobiographies and action to drama and mysteries, a bonanza of great reads awaits you at your nearest bookstore

‘A Promised Land’, ‘Saving a Stranger’s Life’ and ‘No Time Like the Future: An Optimist Considers Mortality'.
Image: Supplied

First up and probably the biggest book this year is A Promised Land by Barack Obama (Penguin/Viking). At 706 pages, thank goodness it now signals optimism instead of despair. Obama is forthright, honest, charming and makes one understand what he and his family went through in his years as the first African-American president of the US.

As an ER doctor for more than 30 years, Dr Anne Biccard recounts some of the bizarre cases that have crashed through the emergency doors in Saving a Stranger’s Life (Jacana). She also looks at the determination and camaraderie of health workers working on the frontlines of the pandemic.

No Time Like the Future: An Optimist Considers Mortality is Michael J Fox’s third memoir. Having lived with Parkinson’s for the past 30 years, the now 59-year-old actor shares his ideas about illness and health, ageing and how we perceive our mortality in relation to time. He takes on these big themes as he did in his previous autobiographies — with humour, poignancy and pragmatism.

‘The Sentinel’, ‘Red Air’ and ‘I Survived: I Married a Charming Man. Then He Tried to Kill Me’.
Image: Supplied

Lee Child is slowly handing off Jack Reacher to his brother Andrew Child and he shows us in their first collaboration, The Sentinel (Bantam Press), that there is no need for concern. As William Saunderson Meyer, one of our finest reviewers, has written: “The Sentinel is a rock-solid co-operation and, if anything, Reacher has been made a little more interesting without losing any of the characteristics that make him appealing.”

War correspondent and writer extraordinaire Hamilton Wende has released the critically acclaimed Red Air (Kwarts Publishers). You know it’s a solid war novel when a US Marine Corps infantry officer (whose name and rank is withheld for operational security reasons) says the book is: “Compelling and intense, there were times I felt as if I were back in Afghanistan operating under the dreaded conditions of Red Air*.”

*Definition of Red Air: when there’s too little visibility for air support, meaning that marines can’t patrol for safety purposes.

I Survived: I Married a Charming Man. Then He Tried to Kill Me by Victoria Cilliers (Pan Macmillan) is a title that grabs by the throat. Cilliers, a trained physiotherapist who served in the British army and reached the rank of Captain, plunged to the ground when she went skydiving. Badly injured, she was shocked to realise her husband (a South African) had tampered with her parachute, wanting to kill her. Chilling. 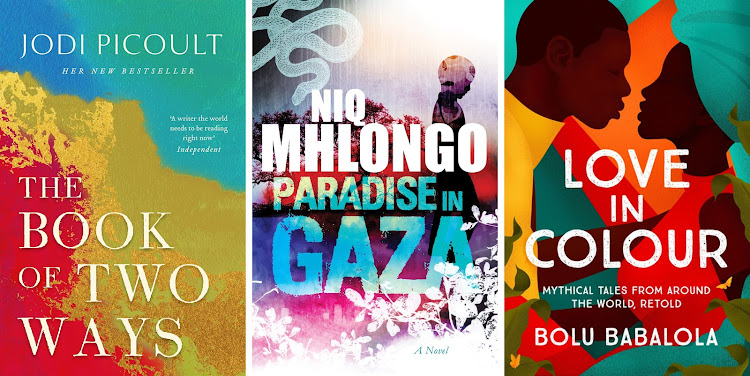 'The Book of Two Ways', 'Paradise in Gaza' and 'Love in Colour'.
Image: Supplied

Jodi Picoult is back. The Book of Two Ways is à la Sliding Doors. Dawn, who almost dies in an air crash, has to go back to her conventional life with her husband and daughter, or go to Egypt, where Wyatt Armstrong is. He is the man who flashed through her mind during what she thought were her last moments. We follow her down both paths to see how each choice turns out. The book’s big questions are: When we leave this Earth, what do we leave behind? Do we make choices … or do our choices make us?

Every Niq Mhlongu book is a keepsake and his latest, Paradise in Gaza, is storytelling at its best. He weaves the mystery of the disappearance of an eight-year-old boy through a powerful novel that deals with African spirituality, politics and beliefs.

We all need to be transported to a land of sea, romance and sunshine. Love in Colour (Headline) is a book of vibrant short stories told by Bolu Babalola based on mythical tales from around the world. It’s pure escapism about how love is expressed by different means.

• This article is adapted from one originally published in the Sunday Times Lifestyle Festive Gift Guide 2020.

The neighbourhood street where books grow on trees

On an oak tree in Judith Road in Emmarentia, Johannesburg, hangs a small, bright-yellow house, just for books.
News
1 year ago