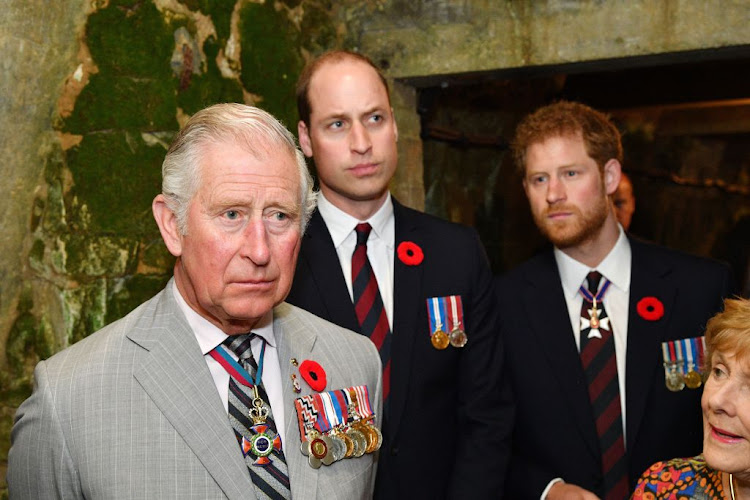 Prince Charles and Prince William have spoken to Prince Harry since his bombshell interview with Oprah but the talks were 'not productive', a friend has revealed. File photo.
Image: Tim Rooke/Pool.Getty Images

Prince Harry has spoken to his elder brother William for the first time since he and his wife Meghan's Oprah Winfrey interview but the talks were “not productive”, a friend of the couple said on Tuesday.

During the interview aired by US television network CBS on March 7, Meghan said one unnamed member of the royal family had asked how dark their son Archie's skin might be when he was born, while Harry said his father, heir-to-the-throne Prince Charles, had let him down and that he had felt trapped.

At an engagement last Thursday, Prince William said he had not yet spoken to his brother but intended to do so, telling reporters: “We're very much not a racist family.”

Gayle King, the co-host of CBS This Morning, said she had spoken to Harry and Meghan at the weekend and that a conversation between the brothers had taken place.

The Duke of Cambridge is the first royal to publicly address the racism allegations levelled against the royal family.
Lifestyle
8 months ago

William's office Kensington Palace had no comment on King's remarks.

Harry and Meghan's interview plunged the British monarchy into its biggest crisis since the death of William and Harry's mother Princess Diana in 1997.

It came after Buckingham Palace said it was investigating allegations of bullying made against Meghan by aides before she and Harry gave up their royal roles to move to California last year.

“I think what is still upsetting to them is that the palace keeps saying they want to work it out privately yet they've all these false stories coming out that are very disparaging against Meghan,” King said.

“I think it's frustrating for them to see that it's a racial conversation about the royal family when all they wanted all along was for the royals to intervene and tell the press to stop with the unfair, inaccurate, false stories that definitely have a racial slant.”

Queen Elizabeth, 94, has said the royals were saddened by the challenging experiences of her grandson Harry and his wife.

.@GayleKing says Prince Harry & Meghan also shared that no one in the royal family had spoken with Meghan as of this weekend. Gayle continued, “They want healing in this family. At the end of the day, that is Harry's family.” pic.twitter.com/Sv0rgiD6YL

“The issues raised, particularly that of race, are concerning. While some recollections may vary, they are taken very seriously and will be addressed by the family privately,” Buckingham Palace said in a March 9 statement.

Earlier, former US first lady Michelle Obama said Meghan's recollections about a remark made about the possible colour of her son's skin were heartbreaking and she hoped Meghan's experiences would be a lesson for the world.

Obama told NBC News: “I feel like that was heartbreaking to hear, that she felt like she was in her own family — her own family thought differently of her.”

“As I said before, race isn't a new construct in this world for people of colour, and so it wasn't a complete surprise to hear her feelings and to have them articulated,” she said.

“I think the thing that I hope for, and the thing I think about, is that this, first and foremost, is a family. I pray for forgiveness and healing for them so that they can use this as a teachable moment for us all.”

Queen Elizabeth and Prince William have both spoken out since the sit-down aired.
Lifestyle
8 months ago

The writer wonders what ‘the bombshell interview’ might mean for the future of racism, sexism, the tabloids and the British monarchy.
Lifestyle
8 months ago

Britain’s Queen Elizabeth on Tuesday issued a short response to the explosive interview her grandson Prince Harry and his wife Meghan Markle gave to ...
Lifestyle
8 months ago