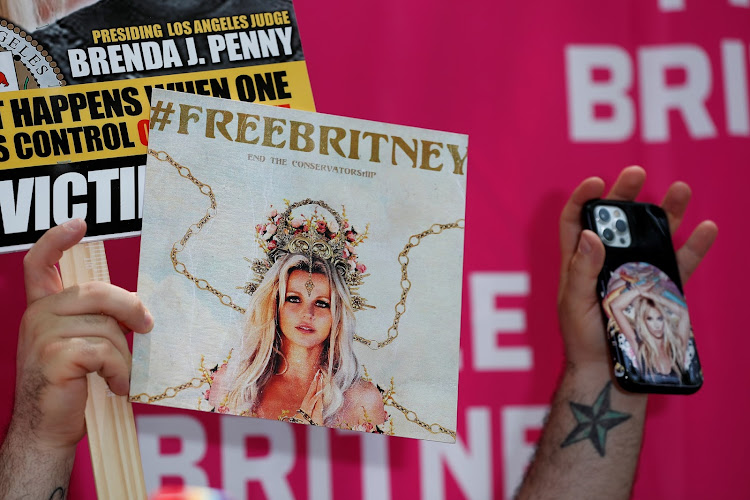 An emotional Britney Spears, pictured her on a poster held by a #FreeBritney supporter, told a US court that she has "to get rid of my dad and charge him with conservatorship abuse". File photo.
Image: Mario Anzuoni/Reuters

Singer Britney Spears on Wednesday won the right to choose her own lawyer to help her end a 13-year-long conservatorship and tearfully pleaded for the court to oust her father immediately from the role of controlling her business affairs.

Her father, Jamie Spears, has been a major figure in the conservatorship since he set it up in 2008 when his daughter had a mental health breakdown. He is now the sole person in charge of her $60 million estate.

“You're allowing my dad to ruin my life,” Spears told the Los Angeles judge by phone. “I have to get rid of my dad and charge him with conservatorship abuse,” she added.

Speaking for about 10 minutes on Wednesday, Spears, 39, said she had always been “extremely scared of my dad.”

She said she was fed up with multiple psychological evaluations in the last 13 years and wanted the conservatorship brought to an end without another one.

Jamie Spears has asked for an investigation into the pop star's claims she had been mistreated under a legal conservatorship by being denied the ...
Lifestyle
1 year ago

“I’m not a perfect person ... but their goal is to make me feel like I’m crazy,” Spears said. Details of Spears' mental health issues have never publicly been disclosed.

Last month she called the legal arrangement abusive and stupid in a 20-minute public address.

Rosengart, who has previously represented Hollywood stars Sean Penn and Steven Spielberg, said his goal was to end the conservatorship.

“Does anybody really believe Mr. Spears’ continued involvement is in the best interest of Britney Spears?,” Rosengart said. “If he loves his daughter, it is time to step aside.”

Rosengart's first job is likely to be filing a formal document asking for the conservatorship to be terminated.

Spears on Wednesday posted video of herself doing cartwheels to celebrate getting what she called “real representation.”

“You have no idea what it means to be supported by such awesome fans! God Bless you all!!!!!," she wrote on her Instagram account, adding the #FreeBritney hashtag.

In June, the pop star complained of being prevented from marrying or having more children, and said she was compelled to take medication against her will.

Jamie Spears' attorney on Wednesday said that many of the singer's complaints were not valid.

“I’m not sure Ms. Spears understands she can in fact make medical decisions and can have birth control devices implanted or not,” attorney Vivian Thoreen said.

Thoreen said Spears believes her father “is responsible for every bad thing that happened to her and that is the farthest from the truth.”

Outside the courthouse, dozens of fans held a rally, chanting “Free Britney” and calling for the conservatorship to end. A smaller rally took place near the Lincoln Memorial in Washington, D.C.

“If you look at her, she looks tired. She just wants her life back and I understand that completely,” said fan Christina Goswick.

Penny made no decisions on requests for 24/7 security after death threats against those involved in the conservatorship.

Jodi Montgomery, who is tasked with the pop star's personal care, Jamie Spears, Ingham and the singer's sister Jamie Lynn Spears have all received threatening calls and messages that have escalated since the pop star's address to the judge on June 23, according to court documents.

The next hearing in the case was set for Sept. 29.

Britney Spears' longtime manager has decided to end his ties with the pop star, according to media outlet Variety, citing his letter to the singer's ...
Lifestyle
1 year ago

US pop star Britney Spears has apologised to her fans for "pretending like I’ve been OK the past two years", as she continues to speak out on her ...
Lifestyle
1 year ago