The musician's latest video shows him kidnapping Kim's new beau, burying him, and growing roses out of his head 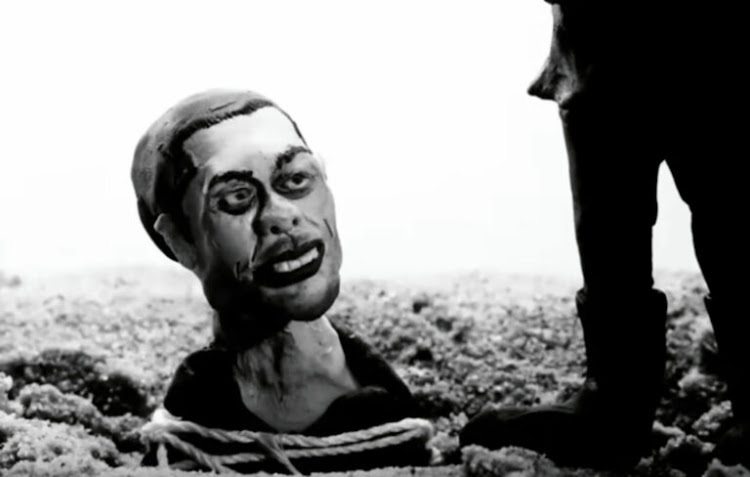 The depiction of Pete Davidson in Kanye West's video for 'Eazy'.
Image: Instagram

While Kanye West's song Easy was released in January, the video for the track only came out this month and has already garnered much controversy. On the collaborative single with the Game, West raps, “God saved me from that crash, just so I could beat Pete Davidson’s ass.” Davidson is currently dating West's former wife, Kim Kardashian, who had herself declared legally single by a judge last week.

The video for the song includes claymation imagery depicting Ye both kidnapping and burying the doppelganger of the Saturday Night Live comedian. The claymation Ye plants rose seeds on the comic's head, waters the seeds, allows the flowers to grow and then cuts them off to fill a truck with the roses, which is probably a reference to Ye's having a truck full of roses sent to his now-ex-wife for Valentine's Day.

One music journalist for online magazine Straight.com wrote: "At what point does one go from being a wholly unrepentant attention whore to a misogynistic, petty, deluded psychopath?"

art is protected as freedom of speech

art inspires and simplifies the world

Art is not a proxy for any ill or harm

Any suggestion otherwise about my art is false and mal intended

According to Straight.com, "West’s bad case of limerence also made headlines last month when he reportedly offered to double the salary of Saturday Night Live’s Michael Che if he committed to having nothing to do with Davidson on the show."

Pete Davidson, on the other hand, says he's unfazed by the video and all Kanye's other  tomfoolery. According to Entertainment Tonight, a source claimed that Davidson is humored by the scene:  "He finds the fact that Kanye included a cartoon version of him in his music video hysterical," the source said. "He is almost flattered by it all because it is so ridiculous to him."

Davidson has claimed not to be threatened by West in any way.

An empire has been built on Kim's remarkable booty - and now it seems to be getting smaller. Could her new goal of becoming a lawyer be to blame?
Lifestyle
7 months ago