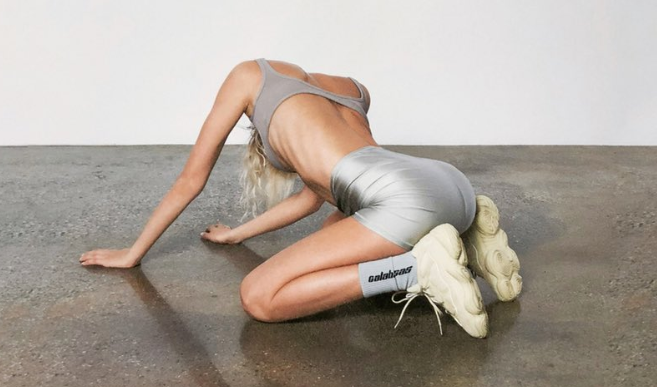 To fuel the hype around the fact that his Yeezy Desert Rat 500 sneakers are now available in an all-new colour called Supermoon Yellow, West tweeted a series of NSFW shots including one of a Kim K clone wearing nothing but his new sneakers.

It's not all influencers in the buff however, the campaign includes shots of fully- or partially-clothed models staring blankly at the camera, embracing or doing vaguely athletic stretches.

Reminiscent of Polaroid snaps, the photos have a gritty nostalgic vibe. They were shot by Eli Linnetz, who has collaborated with West on several projects including his Fade music video.

Reactions to the campaign have been mixed but, as always, parodies have been quick to appear on the streets of social media. Here are some of the best:

Turning upto work on a Monday morning after a heavy weekend like... #SUPERMOON #Yeezy pic.twitter.com/6pWVMZpsO1

Kanye West's 'Ye' is a beautiful mess of emotions

Kanye West's raw, personal new album addresses everything from his relationship with Kim Kardashian to his battle with bipolar disorder
Lifestyle
4 years ago

Stilettos and formal shoes could become to the fashion industry what vinyl records are to music.
Lifestyle
4 years ago

The resale of limited-edition athletic footwear has become big, sneaky business among the hypebeasts of Cape Town
Lifestyle
4 years ago