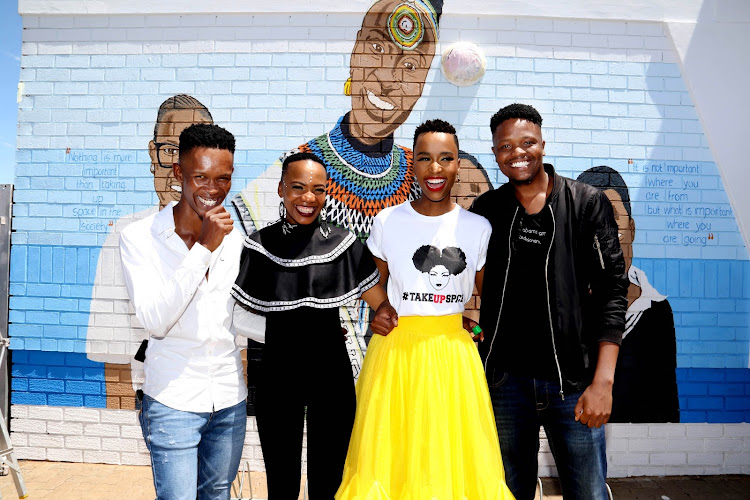 Miss Universe Zozibini Tunzi wears a #TakeUpSpace tee at the unveiling of a mural of her at the Nkosi Mtshazi Public Library in the Eastern Cape.
Image: Supplied/Sowetan

When young entrepreneur Bangilizwe 'Bangi' Msikinya heard that Miss Universe Zozibini Tunzi would be kicking off her homecoming tour with a huge welcome at Joburg’s OR Tambo International Airport, he had an epiphany. This public celebration would be the opportune moment to inspire some of the young women from his home province, the Free State.

As Msikinya works in the entertainment industry (he used to manage DJ Prince Kaybee), he knows that celebrities can be a huge source of motivation for young people. Splitting his time between Joburg and Bloemfontein, he also knows that the Free State is rather short on star power in comparison.

“Kids in Soweto don’t have a lack of inspiration around them; they see soccer players, they see actors and all types of celebrities. They know it’s achievable because they live amongst those people.”

He felt it was a pity that the Free State’s youngsters wouldn’t have the opportunity to see Tunzi as she’d only be touring the Eastern Cape, Joburg and Cape Town. After all, who could be more inspirational than the woman who famously declared on the Miss Universe stage that the most important thing we should be teaching young girls today is “to take up space”.

While Zozibini Tunzi wowed and made us proud with many of her looks, there were times when we second guessed her style
Lifestyle
2 years ago

So Msikinya founded the Take Up Space campaign with the aim of busing 50 young women to the Joburg airport to see Tunzi. Joining forces with some strong, like-minded women, he created the Take Up Space team. They enlisted the province’s MEC for finance, Gadija Brown, to help secure sponsorships, and asked their social media followers to nominate young women who deserved to make the trip.

“There are girls who come from HIV-affected houses, some are the heads of households, and some live with their grandmothers and siblings while depending on the Sassa stipend,” shares Msikinya.

When the group of 50 assembled in Bloemfontein ahead of their great trek to OR Tambo, Msikinya had a surprise for them: he’d collaborated with a graphic designer on a special T-shirt for them to wear. Inspired by Miss Universe herself, it featured an illustration of a young woman with afro pigtails and the slogan #TakeUpSpace.

The mass of excited young women wearing these cool graphic tees at the airport caught the eye of the Miss SA team, which is how Tunzi came to be wearing one during her homecoming tour.

Msikinya has now decided to sell the T-shirts and use the profits to help improve the lives of the 50 young Zozi fans from the Free State. He’s also planning on expanding the range of tees that’ll be available.

Once again, these shirts will be inspired by the words of Miss Universe, who once said “women are not one-dimensional and therefore you cannot box their beauty. We all come in different shapes, sizes and shades, with natural hair and weaves”.

“We are going to have T-shirts where the girl has short hair, no hair, just different types of hair to express the diversity of African girls,” explains Msikinya.

We usually avoid our old classmates. Not Zozi
TshisaLIVE
2 years ago

Are you a fan of this Miss Universe fan art? Six portraits of Zozibini Tunzi

Since bagging the Miss SA title, then the Miss Universe crown, Zozibini Tunzi has become a muse for many artists
Lifestyle
2 years ago

Zozibini Tunzi doesn't need R73-million's worth of diamonds on her head to sparkle. The beauty queen who attended the state of the nation address ...
Lifestyle
2 years ago