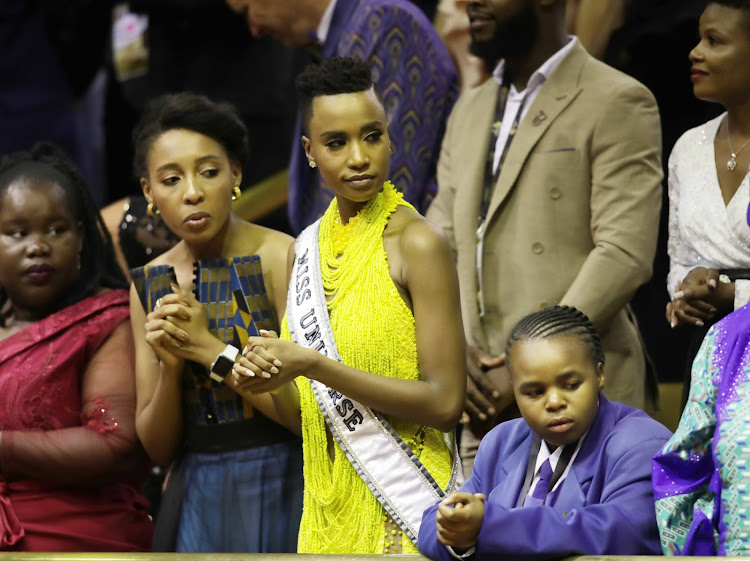 Miss Universe Zozibini Tunzi in a gown by Gert-Johan Coetzee at the 2020 state of the nation address in Cape Town.
Image: Esa Alexander

Zozibini Tunzi doesn't need R73-million's worth of diamonds on her head to sparkle. The beauty queen who attended the state of the nation address sans her Miss Universe crown on Thursday stunned in a canary yellow halter-neck gown.

She might have not walked the red carpet before the event, but she easily could have walked the runway in the Gert-Johan Coetzee creation.

Coetzee, who is a favourite designer among local celebs like Somizi Mhlongo and Bonang Matheba, says he was honoured to dress Tunzi for Sona.

As it was such an auspicious occasion, he was inspired to “present her as a regal African queen, a young woman stepping into her own”.

While Zozibini Tunzi wowed and made us proud with many of her looks, there were times when we second guessed her style
Lifestyle
2 years ago

He elaborates: “We chose the bright yellow as it is such a positive, celebratory colour for someone who in herself is such an inspiration and creates hope for so many young South Africans.

“The gown is fitted to accentuate [Tunzi's] tall, statuesque figure with a low back and a long slit. It's made of lace and is decorated with sparkling Swarovski crystals and long strings of traditional African beads hanging down almost to the knees.”

These beads formed a layered statement necklace at the front, with several strands also draping beautifully over her bare back. The overall design was sexy without being too revealing.

Tunzi attended Sona at the personal request of President Cyril Ramaphosa, but as she was seated in the gallery of the National Assembly, it was hard to admire the full effect of her outfit. Here's a closer look:

When young entrepreneur Bangilizwe 'Bangi' Msikinya heard that Miss Universe Zozibini Thuzi would be kicking off her homecoming tour with a huge ...
Lifestyle
2 years ago

LOL! What Zille, Malema and others should wear on the Sona red carpet

The state of the nation address is THE most fashion-centric political event of the year. Here are some tongue-in-chic wardrobe suggestions for ...
Lifestyle
2 years ago

Best and worst dressed A-listers on the #SONA2020 red carpet

Here's who impressed, and who distressed, with their outfit choices for the state of the nation address
Lifestyle
2 years ago

Politicians got out their best for the Sona red carpet but it was Mandla Mandela and his wife, Rabia, who stole the show again.
Lifestyle
2 years ago