Developers are have put the local community at the heart of their plans to rejuvenate this suburb on the eastern edges of the Johannesburg CBD, writes Ufrieda Ho 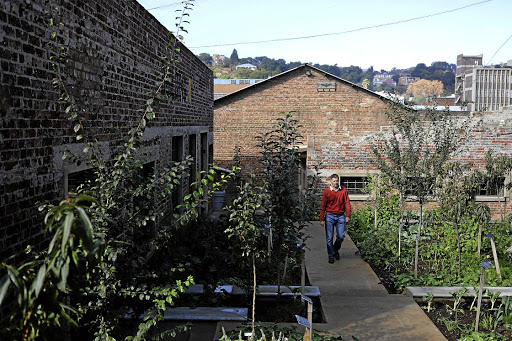 The Victoria Yards developers have planted food gardens in the precinct as part of their alternative approach to urban renewal.
Image: Alon Skuy

My gran cursed under her breath. Some things would get my sweet granny's goat - like people parking on pavements. It meant Lorentzville pedestrians had to squeeze through mazes of metal or step into kerb-side gutters to pass.

As a child, I just listened to her muttering, held her hand and followed her past the parked cars, the factories with their lunch-hour sirens, the chop-shops and overgrown verges. The shabby flats where she lived broke up the light-industrial monotony of this slice of east Joburg.

Working-class Lorentzville never had pretensions to be pretty. It never really cared. By the late 1990s, my gran and grandad had moved from the flats in the crumbling suburb to a government-run retirement village.

As the years have passed, my grandparents have passed, too. There's been little reason to linger in the old 'hoods of my childhood. It has been easier to just ignore the inner-city creep that has come with a messy tangle of hijacked houses, neglected maintenance and worsening crime and other social ills.

Locals today still survive by chopping up cars on the streets while recounting horror stories of crime and griping about being overlooked by politicians. Second-hand car-battery traders peddle their wares from the back of a roving bakkie, shouting specials through a loudhailer, and clots of men wait for endless hours outside hardware stores, hoping for a piece job.

This inner-city fringe has never been poor enough to grab headlines. Locals have not been pushy enough to be noticed by councillors or had airtime to waste lodging complaints.

In the past few years, though, Lorentzville's blip has shown up on the radar of rejuvenation and reinvention. First came Central Kitchen on Victoria Street. This is Nando's' commitment to keeping its international head office in this quite grotty valley where it has had a test kitchen and bottling operation for years.

Then came developments along Frere Road, with a handful of small art studios, a bar with a props warehouse and a rooftop events space, and even potted plants on the sidewalk to stop cars hogging them. 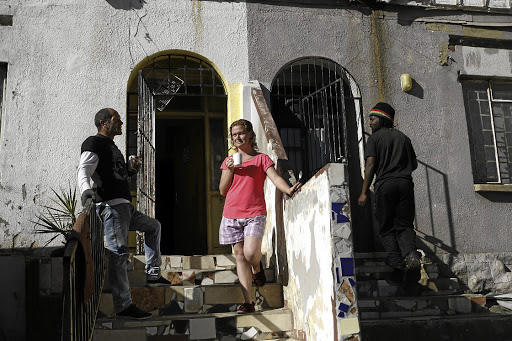 In the past year and a half it's Victoria Yards that has fired public imagination. About 20,000m² of roads, semi-derelict buildings and yards have steadily been transformed into art studios, artisan workshops, urban food gardens and even a craft brewery - the mark of a development taking on the whiff of gentrification.

Dodging the gentrification trap is the urban development Holy Grail. It is a tricky beast to tame, precisely because it's difficult to recognise until it's a hulking fait accompli.

At the outset, the development of ignored city spaces looks like welcome improvement. There's the promise of spin-offs like jobs for locals, the addition of new amenities and even increased agency for better service delivery and infrastructure development.

On the flipside, middle-class money and muscle can transform suburbs into beige convention, removing character and flavour. They can cause rentals and property prices to spike and drive locals to move out or sell up. These development zones can ultimately become elitist, exclusionary spaces and reserved playgrounds for the moneyed.

Dr Melissa Myambo, an honorary research fellow at the Wits City Institute and research associate at Wits University's Centre for Indian Studies, says there are no "cookie-cutter models" of urban rejuvenation development. But it remains essential, she says, to reject development agendas that displace people and sow greater division in society.

"It is complex because we need and want development. At the same time we need to be asking questions about those with class power and private capital and we need to be thinking about how to make heard the voices of people who are pushed to the margins," says Myambo.

She advocates stronger municipal regulations and incentives and more engagement from more quarters. She also warns against rhetoric and good intentions that fail to deliver or have staying power.

For Nando's, the commitment to make its old bottling plant its international head office honoured its own humble Joburg origins. Today there's art, design and hallmark Nando's humour at the campus, but most interesting perhaps is that the corporate heavyweight inserted itself among its neighbours rather than muscled in.

Central Kitchen's new neighbour is Victoria Yards. The idea of settling in rather than muscling in is shared by developer Brian Green. He says the location and space of the one-time derelict factory yards dictated his and his partners' vision for the type of business they could establish. 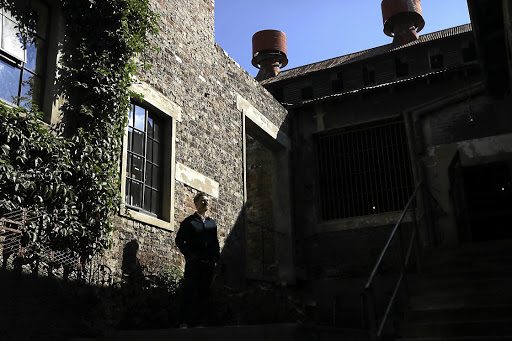 Developer Brian Green in Victoria Yards, billed as 'an ecosystem where tenants thrive as a community ... a uniquely integrated urban complex that is as much about social development as it is commercial enterprise'.
Image: Alon Skuy

"We couldn't turn it into a retail space because the area just would not support that kind of business. At the same time we are a commercial, private development and we want Vic Yards to be able to turn a profit," says Green, who's also the man behind the upmarket 44 Stanley in Milpark.

Urban development in a tough neighbourhood like Lorentzville is about restoring dignity to locals through cleaning up the environment and making it one that can offer opportunity and access to opportunity to more people, he says.

Victoria Yards is trying to do some things differently. Green employed a local resident as his personal assistant and implemented a living wage as the minimum wage for those employed at the yards. He has planted food gardens, focused on skills development for staff, many of whom are from the neighbourhood, and developed communal spaces for tenants for creative exchange. He has set up free rental agreements with emerging artists and social entrepreneurs.

He also won't shut up about wanting donations of musical instruments and volunteers' time to teach local children to play.

Chann de Villiera is Green's personal assistant. He recognised her insider knowledge as a clear benefit for the growth of Victoria Yards.

She lives in Bez Valley, within walking distance of the development. Bez Valley is another stressed, largely neglected Joburg neighbourhood.

De Villiera admits she was sceptical at first about the buzz at the old yards - and then she was blown away.

"People who live here are most worried about safety and security, and even my parents are always talking about maybe moving out of the area," says De Villiera. What is coming out of Victoria Yards has injected new hope into the area.

For Simon Mayson, a PhD researcher and social entrepreneur, Vic Yards represents an important anchor for locals. He is one of the tenants who has been given a rent-free agreement because of his research project.

Mayson is exploring ways to optimise localised economies and is working on a neighbourhood skills audit and register. This network, he says, can turn informal trade, bartering and exchange into an alternative economy. 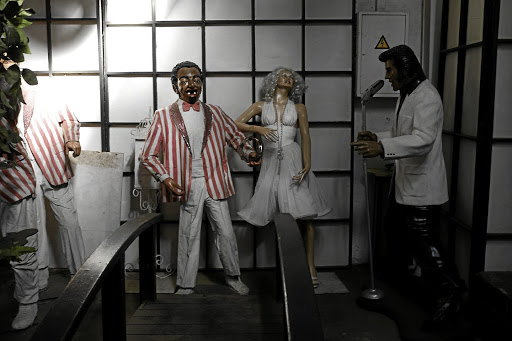 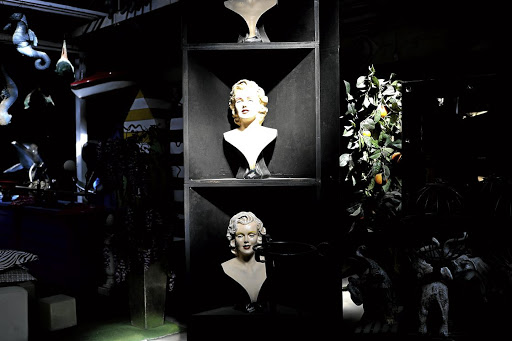 An eccentric installation lights up a corner of the props warehouse section at Lorentzville's Firehouse Gallery.
Image: Alon Skuy

Mayson moved into Bez Valley to do his research and swapped a car for a bicycle. It's given him new insight and access, making his research more the real deal than ivory tower detachment.

"Yes, you hear gunshots at night and people face real issues of crime and drugs, landlord absenteeism and illegal dumping. At the same time Lorentzville is this beautiful tree-lined valley and with the right kind of development has the potential to be a model of how urban development can spark co-working and community well-being rather than creating exclusionary bubbles," he says.

Geoffrey Bickford, programme manager at South African Cities Network, says models of urban development, wherever they are, need to connect people, the government and the private sector.

"We need to be trying different models of development and if they fail we need to fail fast so that we can learn from our mistakes and try the next better solution," he says. 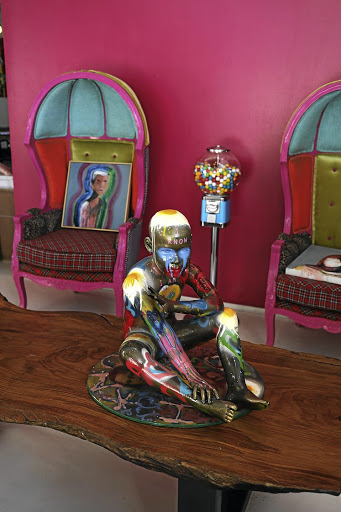 "We should be asking ourselves whose voices are being heard, who are the winners and who are the losers in an urban renewal project and we need to ensure that more people benefit, not just people of a certain class or those with a certain bank balance."

He speaks of transforming systems and mindsets in order to escape the gentrification snare. He says it's everything from adopting a people-before-profit focus to creating social impact bonds with investors and developers and even shifting municipalities' view of revenue generation that stops at rates collection.

Recognising alternative ways in which citizens can contribute, he says, means more people can play a role in strengthening a city as an ecosystem, not a series of isolated ghettos and silos that "don't ever talk to each other".

Lorentzville's metamorphosis is a test of an alternative urban development model. It's not the Holy Grail, but in parts it looks like something that would have given my granny reason to smile. It's a good place to start.

Victoria Yards an oasis in a blighted landscape

New Doornfontein, Lorentzville and Ellis Park are experiencing an exciting rejuvenation with an influx of creative new businesses
Lifestyle
4 years ago