It was a spur of the moment trip, says gran who drove from SA to Europe

Julia Albu, the 81-year-old who travelled across continents in an old Toyota, tells Brenwin Naidu more about her epic road trip 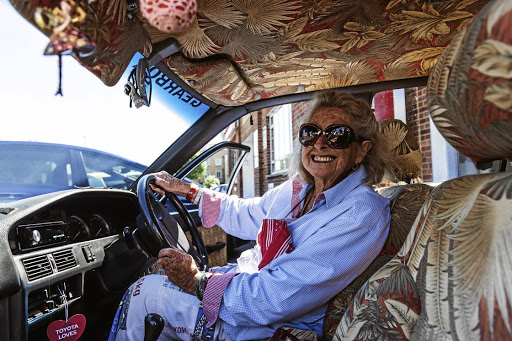 It sounded like the perfect brand campaign for Toyota. An African Conquest: the tagline wrote itself. But when Julia Albu approached the carmaker with her proposal to drive from Cape Town to London, reluctance preceded their eventual support.

Perhaps the reservations were slightly justified. She was 80 years old. And Tracy, her humble 1997 Conquest, already had about 400,000km on its odometer - seeing a lifetime of use as a hauler of people, plants, pets and all the other misuse a car endures.

You would not need a degree in mathematics to calculate the odds of either one succumbing to the vagaries of advanced age. Let alone the sheer madness of such an expedition for anyone feeling young and tough enough.

Obie Oberholzer reflects on his 'Hotazel Years' road-tripping in SA

The famed local photographer recalls a nomadic period from 1974 to 1980, when he crisscrossed South Africa in a bright yellow Morris Minor, with his ...
Lifestyle
3 years ago

And yet, her triumphant presence fills a Rondebosch home one year later, mocking my avoidance of the sweets on the table during our interview. One sits there envying the supreme genetic make-up of this spirited octogenarian and hopes to have even half the level of fitness and vitality she displays.

This month, Sunday Times Lifestyle Motoring was the first publication to enjoy a face-to-face with the seasoned cross-continental traveller following her epic trek.

We start with the simplest question. Why? Albu explains that the challenge was an impulsive one sparked after listening to a discussion on radio about government expenditure on cars.

She took the impulsive opportunity to make a point about vehicular longevity - and human endurance.

"It wasn't on the bucket list or anything. It was just a spur of the moment. I'm going to drive to London."

Her family were "horrified" by the ambition. "But once they got over it, they were supportive and wonderful." A quarter-way through her country-by-country overview, she pauses, somewhat dazed about the exact order of things. "It's a bit jumpy, I know, but you'll sort it out."

It wasn't on the bucket list or anything. It was just a spur of the moment. I'm going to drive to London

The journey began in Johannesburg, with a send-off by the Pretoria chapter of the Harley-Davidson club. She crossed Botswana, Zimbabwe, Zambia, Malawi, Tanzania, Zanzibar, Kenya, Uganda, Ethiopia, Sudan and Egypt.

From Egypt, the car was shipped to Greece and Julia flew back home for a medical check-up.

She was then reunited with her car, commencing the drive from Greece, through Albania, Montenegro, Croatia, Slovenia, Austria, Germany, Belgium, Holland and eventually arriving in London. The total distance, Albu estimates, was in excess of 20,000km. It took a year.

London was not her final stop, and was followed by France, and then Italy, where she fell ill and returned home, leaving the car in Europe. Tracy is being driven down by a fellow traveller-turned-friend, who saw the exploits of Julia and the Conquest on a blog dedicated to the adventure.

Her narration of the entrance into the land of pyramids sounds fit for dramatic cinematography. Picture the dialogue between Julia and her guide at the end of the Ethiopian border.

"Right, that's it, you're on your own," he says. She counters, "What do you mean?" He responds, "I've got no passport, you're on your own." Albu pleads: "But I'm driving through the desert!" The guide explains with nonchalance that she shouldn't worry and if she gets lost, just ask for directions. "But nobody speaks English." He says goodbye and runs for his bus.

She drives on, through the desert, with dusk looming. "I thought I'd never get to Khartoum, but I turned up the radio and sang." At that point she passes a little herd boy with his goats, eyes fixated on the Toyota trundling along with a singing old lady at the helm. "He couldn't believe what he was seeing or hearing."

Some chapters were less triumphant. Such as making a 10-hour drive back to Kenya from Ethiopia because of documentation issues. "You don't know what tears are like. I cried buckets. In the end, to get me out of the building, they gave me that visa." 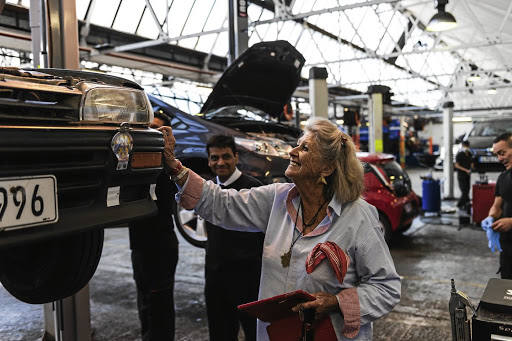 It was one of many bureaucratic hassles along the way - but the "fixers" that frequent almost all border posts helped expedite processes on some occasions.

For all these challenges, Albu describes the beginning of the expedition in a way that almost inspires one to get in the car, start it up and head towards the equator.

"There is one road, the Great North Road, you follow that road and it goes straight up Africa, I see the silver ribbon from above when I fly and think, 'I did that!'"

There was a point in the journey where her attitude was less gung-ho. "I cried when I left home. I just didn't know what I was doing. I was nervous."

The turning point in mood arrived through Botswana. "There's 23km without a bend, with a verge on each side, you'll see buck, elephant, giraffe and suddenly you want to see more, you're excited, you have a wonderful sense of freedom."

And what about the danger aspect? "I was very lucky that, I think with my age, I didn't come across anybody who was abusive, or insulting, people were just... charming."

In 1967, SA journalist Terry Bell and his wife Barbara decided it would be fun to paddle from London to Dar es Salaam in a kayak. Little did they ...
Lifestyle
3 years ago

She adds: "You are very careful, because you're told how dangerous it is, but you don't have to be over careful. I felt a lot of people don't know Africa. I don't know Africa, except what I've seen - and all I've seen is marvellous."

Preparation ahead of the journey took about a year. Julia needed to be in the right physical state, in addition to receiving the full spread of inoculations. And Tracy required similar maintenance: a lift-kit, the appropriate rubber for varying surfaces and a new radiator. In addition, her owner insists that a major service was performed before setting off.

"Nothing broke... And that's what's so boring! I went looking for romance and all I got was a kiss from a camel."

Perhaps her hopes will see fruition next time. She plans the same trip, this time via the other side of the continent.