Novice or not, e-biking is a great way to experience the majestic Cederberg 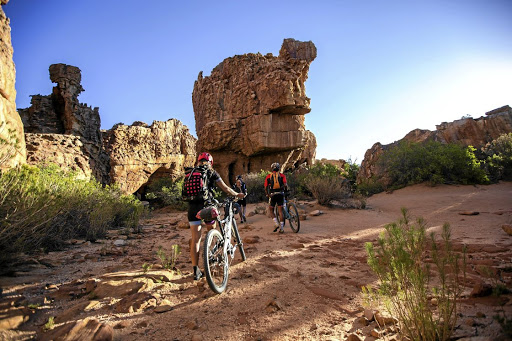 The Cederberg wilderness on the West Coast is famous for sculpted red sandstone shapes, which attract rock climbers from around the world, and now bike riders are admiring them too.
Image: CJ CINEMATOGRAPHY

"How much battery is left?" tour leader Richard Lord asked.

No, it's nothing to do with load shedding. He was addressing a cyclist getting off a neon-green electric bike in the Cederberg wilderness. Blue skies above, honey-coloured river below. The battery bar? Red.

No problem. Once Lord had replaced her battery, five e-bikers, including myself, started winding up the 4.7km Uitkyk (Lookout) Pass that joins the northern and southern Cederberg, a Unesco World Heritage site on the West Coast.

If you're into real slow travel and going off the beaten track — but aren't an experienced cyclist or super fit, like the trio of gravel bikers snaking up the pass ahead of us —pedal assist e-bikes are the way to go.

Prince Albert's dramatic mountain surrounds are a big pull for cyclists, who tackle its surrounding hills by day, then take in all its historical and ...
Lifestyle
2 years ago

The top of the 1,042m pass marks the point in the Sneeuberg mountains where the rest of the world (no more cellphone reception) falls away.

With glimpses of the Doring River down one sheer side and cliffs soaring on the other, Uitkyk lives up to its name. A black eagle, one of about 100 nesting pairs in the conservancy, circled above us.

The Cederberg Circuit is one of four Cape Cycle Routes, launched by the Western Cape government. Lord, co-owner of the Vivid Bike Company, initiated the three-day trip with their support.

The lithe athlete is a legend in SA climbing circles. After repeated injuries, he switched to mountain biking, where he has done himself other injuries from racing technical, single-track routes.

Today, we're taking it easy on mostly gravel roads - a shortened version of the 247km Cederberg circuit. The route has a 3,538m ascent and is rated 6/10 for difficulty. It's safe, even for novices.

We left Cape Town on a misty morning and headed for the Cederberg. Three gravel bikes were off-loaded at the Algeria turn-off, and their riders from our group took off like arrows. They cycled about 50km past citrus orchards towards Clanwilliam, while we did only about half that distance on e-bikes.

We saddled up at a bridge over the Olifants River and followed its course along its eastern bank, moving as lazily in the heat as the meandering river itself.

Four members of Cederberg Adventures, a local tourist initiative, joined us for this leg.

The temperature hit 43°C. As soon as we got to the Yellow Aloe guesthouse in Clanwilliam, I jumped into the pool in all my kit, and that's where we spent much of the afternoon.

At sunset we headed from Clanwilliam, up the Pakhuis Pass, where fantasy shaped rocks leap out of the landscape and wild flowers abound. This marks the northern edge of the conservancy, where the rare cedar tree grows.

The grave of Afrikaans poet and doctor Louis Leipoldt, in a wide cave with rock art, caught our attention. 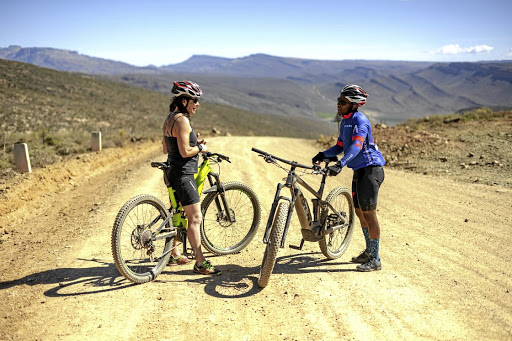 Under the stars later, we feasted around the fire — and I do mean feast. Catering company Nicky Noodle was great, including owner Nicky Snyman's padkos.

On the second morning, we left early for the 70km ride into the heart of the Cederberg, a mostly untouched and uninhabited idyll stretching for some 182,000ha along the base of the Sneeuberg range.

That's when we had a break at Cape Nature's Algeria campsite to switch the battery, and begin the climb up Uitkyk, which felt steeper than the Franschhoek Pass in the winelands.

This was the first outdoor activity I'd been allowed to do two months after a knee operation, and the pass gave me no trouble on the e-bike.

At its crest, I hit the last bar of battery, which I had used mostly on sport mode. Sport is halfway between the eco (most effort) and turbo (minimal effort) modes.

Even Hennie Matthews, 41, from the Moorreesburg Cycling Club could not resist sport mode when the angle got severe.

From Uitkyk, we loaded the bikes and descended into the Driehoek Valley to Cederberg Private Cellar, with its green vineyards and pink and white roses.

The wine-tasting room is closed on Sundays so we quaffed beer instead — I recommend trying their craft beers. A friendly barman poured me glasses while a World Cup rugby game played on a big screen.

Leaving the winery - where you can get permits to hike to landmark rocks like the Wolfberg Arch or Maltese Cross - we travelled up and down another pass into the Kromrivier Valley.

Usually I camp at Kromrivier when we come to climb at the nearby Truitjieskraal crag, but this time we were staying in gorgeous luxury chalets.

I've been on countless climbing trips to the Cederberg, one of my favourite places in the world, but this was the first time I saw it from a saddle — and the e-bike won me over.

Electric bikes allow friends and couples to ride together even when they are unmatched in fitness or experience, or recovering from injuries

Electric bikes allow friends and couples to ride together even when they are unmatched in fitness or experience, or recovering from injuries.

Plus you're free to speed. On the final day, heading to the circuit's southern point of Op Die Berg - past Grootrivier and the olive groves of Mount Ceder - I tested this by cranking into turbo mode until even the gravel bikers were left in the red dust. Long, fast downhills as well as a 5km uphill pass featured on that 60km day.

Mountain-biking events in South Africa are increasingly popular despite costing a fortune. Why not put (some of that) fortune into exploring the Cederberg on a mountain bike, gravel bike or e-bike?

DWARSRIVIER: The Cederberg Brewery offers patrons the Cederberg Original Lager, the Boggom Blonde Ale, Voertsek India Pale Ale and Chatterbox Crystal Weiss - all easy tasting after a hot ride, but I enjoyed the original lager the most.

The brewery was set up in 2019 at the Cederberg Private Cellars, home to multi-award-winning wines.

Boggom and Voertsek were freewheeling nomads who appeared in the works of poet C Louis Leipoldt.

According to brewery lore, "Boggom's relaxed attitude [makes] him the more approachable half of the iconic pair". Voertsek, meanwhile, "follows the mantra of living fast and dying young".

The Cederberg wilderness is 250km from Cape Town and the Vivid Bike Company provides transport.

The thatch cottage has a fireplace, stone floors and exposed-beam ceilings and four bedrooms. A secluded garden room is attached.

Nicknamed Krom - short for the Kromrivier that runs through the valley - Cederberg Park is an eco-friendly retreat with luxury chalets, luxury camping and cottages and lately, an enticing eatery.

Climbers, who frequent the nearby Truijieskraal crag, tend to hang out at the campsites along the river. All 18 have private ablutions as well as a braai, power point and WiFi. Luxury for campers.

The five self-catering cottages along the river can sleep up to six.

The restaurant Die Slee (The Sleigh) has a cedarwood sleigh runner on display. Wooden sleighs were used to transport goods where ox-wagons couldn't go in the 19th century.

The Vivid Bike Company Cederberg Circuit trips cost from R7,500, depending on the number of riders.

Are you tough enough to bike-pack the challenging Colorado Trail?

Bike crazy? 5 things to do in Prince Albert - even for your non-riding pals

This town at the foot of the Swartberg Mountains has riding routes, gourmet attractions, a retro theatre, and oodles of charm
Lifestyle
2 years ago