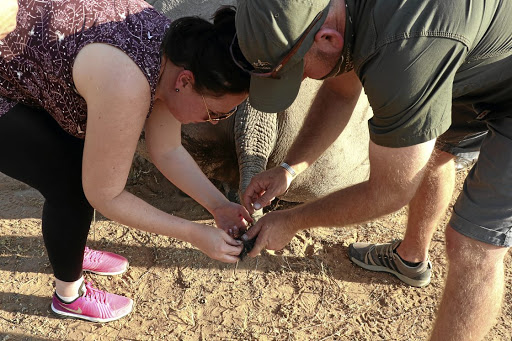 I can think of worse ways to spend a late-spring afternoon than cruising down the Matlabas River in Limpopo's Waterberg, sipping a sundowner under candyfloss skies, feet splashing through the water. I can't think of many better ways.

As far as introductions go, this is a rather good way of getting to know the terrain of the newly opened Marataba Conservation Camps on a 21,000ha privately managed section of the Marakele National Park.

"We're going into uncharted territory now," one of our guides announces — we're further down the river than they've explored before. Someone spots three monitor lizards wrapped around a branch sticking out of the water. We pass a kudu in a neck-deep swim. Something nibbles my toe, prompting a chuckle from the barefooted Chris Renshaw, our guide for the next three days.

Upon our return upriver, we pass Founders Camp, where we will spend our nights in pillowy slumber after long days spent getting stuck into hands-on conservation activities.

It's also here where the guests from the second camp, Explorers, join us for a talk from Dr Andre Uys, who heads up Marataba's conservation team, on what to expect from the rhino-darting, in which we will participate the following day.

NOT YOUR AVERAGE SAFARI

As a contractual national park, Marataba follows an innovative conservation model that allows a private-public partnership with SANParks. Thus, they offer a different experience, where guests can "travel with a purpose", as they like to say, by actively participating in conservation activities on the reserve.

Accompanying us the next morning is Dr Morné de la Rey, a veterinary surgeon and embryo-transfer specialist who is at the forefront of efforts to bring back the Northern white rhino — the last male died in 2018 in Kenya and only two females, Najin and Fatu, are left.

De la Rey is attempting to bring back the species through in-vitro fertilisation, using semen that was banked from the last seven Northern white bulls while they were still alive.

As part of their research, De la Rey and his team harvest eggs from Southern white rhinos, a process they have discovered often kick-starts a cow's oestrous cycle if she hasn't calved for various reasons, often after experiencing a traumatic event.

De la Rey isn't part of Marataba's full-time conservation team, but works with them when there's an opportunity to advance his work.

"We've had a few animals that we had to do pregnancy diagnosis on and if they weren't pregnant it created the opportunity for him to get egg cells," Uys explains.

The next morning, a helicopter searches for a suitable cow to dart from the sky. As we catch up by car, the cow is already unsteady on her feet, the sedatives having gone to work instantly. She wobbles before thundering to the ground. We had been warned that this might be hard to watch.

As soon as she's down, the team gets to work and we're allowed to approach on foot. One ranger monitors her breathing with heart-moving tenderness. If need be, she'll be given oxygen to help her breathe more easily. Her ears are notched for identification purposes, tail hair gathered for DNA, and her horn is measured and microchipped. Should the unthinkable happen, this could help with tracing the horn and building a case for prosecution. 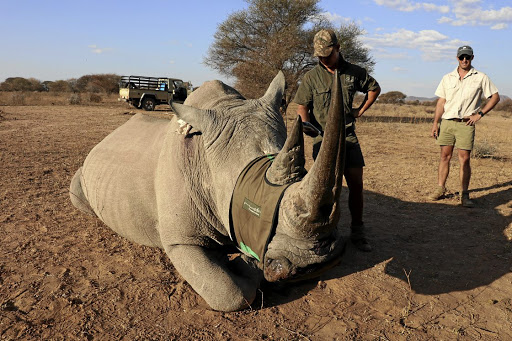 Standing next to this magnificent beast in such a vulnerable state, I feel hesitant to touch her. "Go on," Renshaw urges. I put my ear to her chest, trying to feel her breathing. Her skin is rough and her body is one solid mass, but there's a small patch of softness on her belly.

The team works swiftly. As soon as they're done we clear out and an antidote is administered. Within minutes the mother-to-be is back on her feet, trotting off into the distance with a happy after-effect that will last a while longer.

We, however, have more work to do in the afternoon, observing a mass impala capture. The goal is to sell about 250 of the animals to a neighbouring farm.

Perched on a vehicle, we watch as a helicopter herds the first group of fidgety impalas into a boma. When a siren sounds from the chopper, two men run to close a curtain — the first of four that will eventually get the impala into a closed-off section of the boma and onto the truck.

The males' horns are covered with plastic piping to prevent them harming their fellow inmates. Capture can be dangerous to the animals, but on average there's a 2% fatality rate and it remains one of the quickest, easiest and safest ways to round up them up.

The next morning is dedicated to finding two cheetah brothers that roam the property.

Allowing us an extra half hour of sleep, Uys's son, Ben, starts tracking them using a telemetry tracking system early in the morning. We find his vehicle parked next to the road and move on foot from there, Renshaw tracking their footprints deeper into the sickle bush. 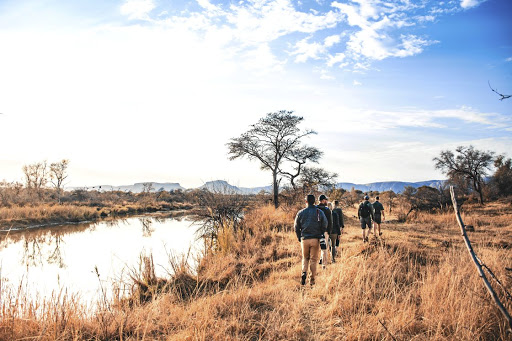 On the brink of abandoning the mission, we find Ben and the cheetah pair, lying in the shade of some trees. There has never been a recorded incident where a cheetah has attacked a human, Renshaw assures us, as we move closer, one by one, until they are mere metres away. Minutes tick by as we sit, fascinated by these hunting machines, their movements often mirroring one another in elegant poise.

Heading back, we opt for a path with less sickle bush, stopping occasionally to observe lion and rhino tracks in the sand as a reminder that we're the ones imposing on their turf.

With the previous day's rhino encounter still sinking in and the kindness the cheetah boys have shown us, the need for us to tread lighter in the tourism industry, and for us to respect the nature around us in a more palpable way, really hits home.

Marataba Conservation Camps operate with a low-impact three vehicles, or three bookings, at any one time.

Laid-back Explorers Camp can be booked on a semi-exclusive basis (maximum two groups). It has two vehicles, five canvas tents and one family tent, with space for up to 12 adults and six children. It has a typical camp feel, complete with hammocks, bonfires and a busy water hole. 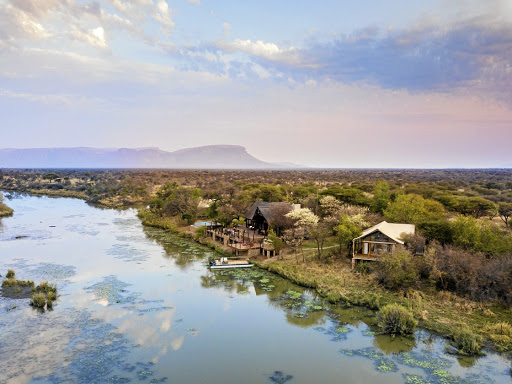 The luxurious Founders Camp, on the edge of the Matlabas River.
Image: Marataba Conservation Camps

Luxurious Founders Camp has one dedicated vehicle and is available for exclusive use (by up to eight adults and two children). Its four private suites boast indoor and outdoor showers, large baths, and wooden decks overlooking the river. The main area has a pool, indoor and outdoor dining areas and a lounge with board games.

In addition to daily land and water safaris, guests can participate in transect walks, camera-trap setup and analysis, game census logging and compiling of ID kits, and swims in Bushman's Gorge.

Marataba is offering a special opening rate for South African residents until January 10 2021:

Per-night rates reduce with longer stays and there is a per-person surcharge for additional adults and children. Rates include all meals, local drinks and safari and conservation-focused experiences.

Rates exclude the community and conservation levy of R750 per person per night and specialist experiences, such as rhino notching.

• Oberholzer was a guest of Marataba Conservation Camps.

Want to stay in a national park this month? These are the ones that will open

Accommodation in the majority of national parks will be open to intraprovincial tourists from next week, South African National Parks (SANParks) ...
News
1 year ago