Joburg businessman who tested positive for coronavirus speaks out

It was supposed to be an international reunion of friends and family. Instead a Johannesburg business person came back from the US with Covid-19 and to an anxious wait to see if he had infected his family.

The middle-aged man, who is in self-quarantine at home, told the Sunday Times yesterday that he had almost fully recovered but would observe the 14-day quarantine rule before being tested again to see if he is virus-free.

His ordeal began during his journey via Dubai to Connecticut, though he only began feeling sick on the return trip.

"I started feeling a little bit otherwise [on the plane] but I thought nothing untoward because I had been travelling," said the man from his study, where he communicates via WhatsApp video with his family in the rest of the house.

"But in the back of the head there's the thought that it [Covid-19] is possible."

A close-knit Limpopo community that will house the 121 South Africans who fled Wuhan is being ripped apart by fear.
News
1 year ago

Upon arrival in Johannesburg, he alerted his doctor, who advised him to take precautions.

"He said he doubted it was corona - America wasn't considered a high-risk zone - but his suggestion was not to go near anybody and to stay isolated, so that's what I did."

He commandeered his daughter's room and his study area as a quarantine zone. 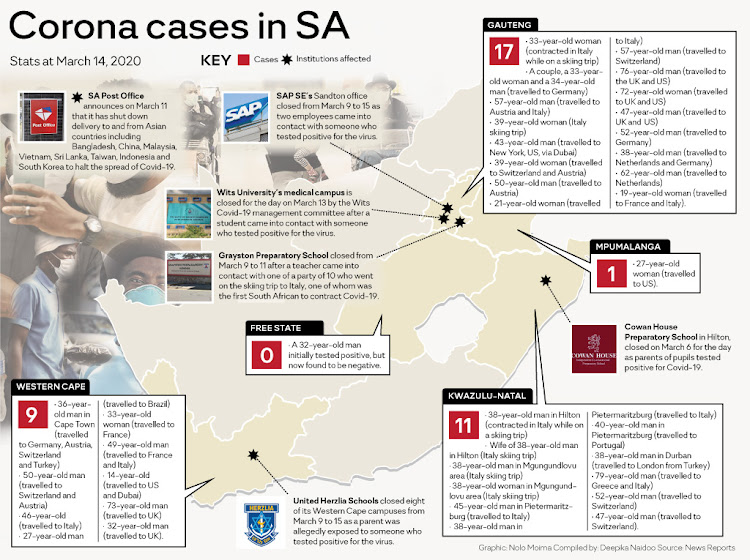 The following day he felt worse. "I thought it was good old man flu, so I phoned the doctor. He examined me and sent me to the lab for a test.

"Then I went straight back home, back into isolation; 24 hours later the test came back positive. I have remained in isolation ever since."

The man's wife has tested negative and his children are showing no signs of ill-health. He said his own symptoms have disappeared to the point that under normal circumstances he would have returned to work.

"My study has a glass window through to the rest of the house - it is a bit like a comedy."

He said he was still unclear how he had been infected but suspects it could have been during his flight transfer in Dubai.

"There were a lot of people at the party and there's no way of knowing who gave it or got it or had it - I could speculate till the cows come home. People were coming in from all parts of America." He said the party had been held in Westport, Connecticut.

US media this week reported on a school shutdown and other emergency health measures in Westport due to a suspected outbreak of Covid-19 stemming from a party in the town on March 5.

"Forty people, including children, were at the party, and 14 are currently experiencing flu-like symptoms," said the report in WestportNow.com.

It was unclear whether the party mentioned in the report is the same one attended by the Johannesburg man.

"I don't believe I'm the problem anymore," he told the Sunday Times.

"It seems that the real problem is now the people who are too scared to say anything. The problem is the ignorance of the public and the ostracism which will ensue because of people being ignorant, and which will cause more people to stay silent about their infection."

SA could introduce a total ban on travellers from Europe, order sports events to be held in empty stadiums and limit mass gatherings to 1,000 people ...
News
1 year ago

First there was racial distancing - locals taking a wide berth around Chinese tourists - then there were the jokes - Italians having a good time when ...
Opinion & Analysis
1 year ago

A Nedbank executive from Durban who is among those who tested positive for the coronavirus after a ski trip to Italy says he is in "good health and ...
News
1 year ago