Provinces brace for 'thinning' of settlements in Covid-19 fight 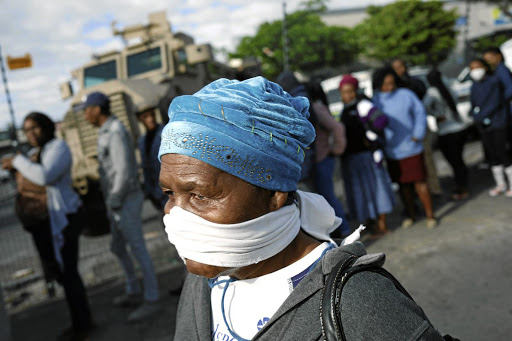 An elderly, unidentified woman covers her face with a makeshift mask as people queue to collect social grants and shop during the 21-day nationwide lockdown in Khayelitsha township near Cape Town.
Image: Reuters

Several provinces have begun identifying densely populated areas for the relocation of tens of thousands of residents from their homes in a bid to slow the spread of Covid-19.

But as the coronavirus that causes the disease begins to surface in townships - with infections in Alexandra, KwaMashu, Khayelitsha and Umlazi - two experts have warned against the government's plan, which was announced last month by minister of human settlements, water & sanitation Lindiwe Sisulu.

The plan to decrease the head count in 29 critically overcrowded informal settlements across Gauteng, KwaZulu-Natal, the Western Cape and Eastern Cape is at an "advanced stage", the department said this week.

The elderly, disabled and shack dwellers will likely be the first to be evacuated and housed in emergency accommodation, the department has said.

Brace yourselves, SA. Halfway through a 21-day lockdown, the country is fixated on daily new infection levels as it prepares for a possible Covid-19 ...
News
2 years ago

The national department was hesitant to give much detail due to the "sensitivity" of the relocations, but the affected provinces confirmed details of the plan.

Western Cape human settlements MEC Tertius Simmers said settlements in Dunoon and Philippi in Cape Town would be the first port of call.

In KwaZulu-Natal, the settlements in focus are Kennedy Road and Amaoti in Durban.

"The focus would be on freeing up some space by removing existing units, be they shacks or standing houses. It is estimated that a quarter of residents in each settlement may need to relocate," said KwaZulu-Natal human settlements spokesperson Mbulelo Baloyi.

Eastern Cape spokesperson Masiza Mazizi said the provincial department has identified 21 settlements for evacuation. Plans include moving 2,000 people from the settlement of Duncan Village in East London, home to as many as 100,000 people.

In Gauteng, spokesperson Castro Ngobese said the Housing Development Agency is finalising the procurement process for temporary shelters. The Sunday Times has learnt that areas affected in Gauteng will include Stjwetla in Sandton and Mooiplaats in Pretoria.

Human settlements national director-general Neville Chainee said there is no time frame for when families will be asked to move.

"The relocation of households is dependent on a number of factors and these include susceptibility to the danger of a virulent spread of Covid-19, makeup of households and consent of households to be relocated," he said.

"There is no set figure to the number of households to be relocated."

Human settlements ministry spokesperson McIntosh Polela said that though the relocation is urgent, it requires a sensitive approach,

"Historically, our communities have resisted being moved. As such, we are careful that they be consulted and assured that they are going to be moved not far from the current place of their residence."

Sisulu last week announced that 17 land parcels have been identified for the "de-densification" project.

Departmental spokesperson Xolani Xundu said this week the department is reluctant to provide too much information on the land parcels so as to avoid land occupation before the sites are ready to be lived on.

Of the 17 land parcels, about four are owned by private companies and individuals and the rest by municipalities. Xundu would not say how much the department was planning to spend on purchasing the land.

People in the affected areas who spoke to the Sunday Times this week were either unaware of the plans or said they had heard talk, but no details from the government.

In Alexandra, Johannesburg, with a population of 700,000, grandmother Nancy Myaka's home has been a refuge for her daughter and grandchildren during lockdown.

"If it would help people then I wouldn't mind relocating for a little while. But Alex is full of desperate people and I may just come back to an empty house," said Myaka.

The prospect is also fraught for Jacqueline Makongolo, who has lived in her Alexandra home for more than two decades.

"I have six children and kitty who live with me. We are complying with the lockdown, but I can't move and leave the cat behind," she said.

Michael Setloboko lives in a room at the back of a dwelling close to the Alex police station. He survives on donations and piece jobs.

"Lockdown is so depressing, but I wouldn't relocate even for a short while. I can't leave my stuff behind, I have worked very hard for the things I have," he said.

In the Western Cape, Nyanga community policing forum chair Martin Makazi said there is confusion about the message the government is sending out.

"What guarantees will be in place to enable communities to return to their homes after the pandemic threat has subsided?"

Loren Landau of the African Centre for Migration and Society said those targeted are likely to be the poor, politically marginalised, linguistic minorities, or groups that local authorities or residents have long wanted to remove.

He said township spatial planning has been ignored for decades, and now people will pay the price.

Health expert: 'There is an urgent need to upscale Covid-19 testing facilities'

The total number of people testing positive for the deadly coronavirus in SA is "an underestimate of the burden of Covid-19".
News
2 years ago

Gift of the Givers has set up a Covid-19 testing station at the University of the Witwatersrand.
News
2 years ago