Covid-19 second wave: Now, not so lekker by the seaside 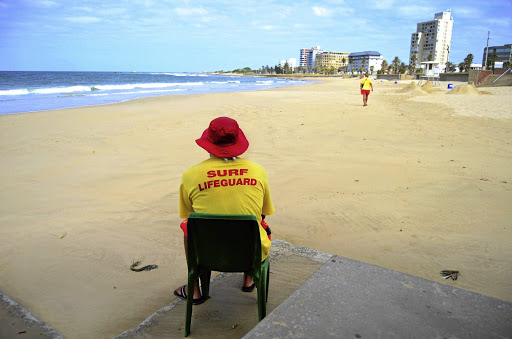 Lifeguards keep watch on Port Elizabeth beaches this week after President Cyril Ramaphosa announced that all beaches in the Eastern Cape would be closed. Access to the beaches was blocked by fences yesterday.
Image: Theo Jeptha

Tourism establishments are drowning in debt and cancellations following the closure of beaches by President Cyril Ramaphosa on Monday.

And legal action against the government is growing, as the Kouga local municipality in the Eastern Cape - home to Jeffreys Bay's famous surfing beach, Supertubes - prepares to file an urgent application in the high court in Pretoria tomorrow.

And in the southern Cape, the Great Brak Business Forum, Western Cape businessperson Louis Cook and civil rights organisation AfriForum on Tuesday filed a motion to have the closure of beaches in the Eastern Cape, Garden Route and KwaZulu-Natal declared unconstitutional.

The challenge has also been brought against Dlamini-Zuma and Mkhize, as well as Western Cape premier Alan Winde.

Luvuyo Mnyute, who lives in Cape Town, always spends the end-of-year holiday at his ancestral home in East London.
News
10 months ago

The president of the Liberty Fighters Network pressure group, Reyno de Beer, is expected to act as amicus curiae (friend of the court) and provide insight into the case after a ruling in June in which judge Norman Davis declared the lockdown "unconstitutional and invalid" - in a case argued by De Beer. In court documents seen by the Sunday Times, the government has issued a notice to oppose the application.

The Kouga municipality said its court application tomorrow would be based on the importance of balancing saving lives and saving livelihoods.

"The Covid-19 curve in the Kouga region has not spiked significantly over the past three weeks, which is encouraging and supported by the high percentage of recoveries. On the other hand, the festive season is a last lifeline for many employers and employees, who have already suffered tremendous losses over the past nine months.

"If the beaches remain closed, the impact on businesses, job retention and creation will be devastating."

The municipality said Dlamini-Zuma had "failed to follow a fair notice and comment procedure before promulgating the regulations" and that there was no justification for the restrictions.

In an open letter to Ramaphosa, Garden Route district municipality mayor Memory Booysen said the decision to close the beaches in the southern Cape was likely to have the opposite effect, "as we now see large crowds of people flocking to every other amenity, including inland rivers, lagoons, lakes and shopping centres, which are enclosed spaces and where social distancing is far more difficult to adhere to than outdoors".

President Cyril Ramaphosa has probably in his two years in office made more speeches than all his predecessors put together. If not so, it must be ...
Opinion & Analysis
10 months ago

Hotels and bed and breakfast establishments in Nelson Mandela Bay said they had experienced cancellations after the area was designated a Covid-19 hotspot, and now the beach ban had dashed the hopes of businesses of salvaging some income in 2020.

Nelson Mandela Bay Tourism chair Shaun van Eck said the metro had "probably lost at least 70% of the bookings that were made".

"It is disheartening more than anything else. People have made it through Covid lockdown and are hanging on by [their] fingernails and hoping for a good summer season just to get some cash flow and get going again, and instead they are having these cancellations ... they are going to have to pay back all the deposits, which they have been using for cash flow. It's a body blow to hope," Van Eck said.

Shena Wilmot, chair of the Port Elizabeth Metro B&B Association, said the beach ban is the "final nail in the coffin as far as our summer season goes".

The association, whose members include about 60 B&Bs, had previously asked the government for a more targeted approach, similar to restrictions in KwaZulu-Natal where beaches are only closed on five days.

Highest number of daily infections and deaths and a new record for active infections.Those are Saturday's grim Covid-19 milestones in the Western ...
News
10 months ago

But he added that overall the number of visitors from Gauteng will be down as "many families are opting to stay in Gauteng or break away to bush or inland destinations".

Heather Hunter, chair of Umhlanga and Surrounds Tourism, said members of the organisation have reported cancellations along the KwaZulu-Natal coast, but nothing on the scale of Port Elizabeth.