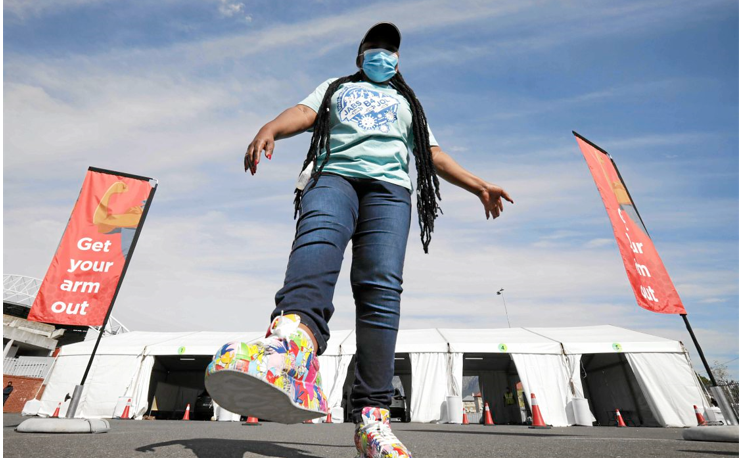 Western Cape Health MEC Dr Nomafrench Mbombo dons funky platform takkies and a T-shirt that reads `Jabs b4 Jols’ to take the message of Covid-19 vaccination to the youth on their own turf — in nightclubs and malls.
Image: Esa Alexander

Dr Nomafrench Mbombo, the Western Cape health MEC, is not your typical bureaucrat sitting in an office in a stiff suit. Apart from visiting every corner of the Western Cape to encourage vaccination, she has launched a “Jabs b4 Jols” roadshow to meet the “ama-TikTok” on their own turf and often arrives in Insta-worthy footwear and a hairstyle of note.

Her philosophy? Meet people in their normal cultural spaces and you’re far more likely to get them jabbed. She says young people shy away from formal health services at the best of times, but a club is a place they know and love — which is why she recently had a pop-up vaccine site at Rands club in Khayelitsha. Next stop: Cubana and clubs in Long Street in Cape Town’s CBD.

The idea isn’t that people will get a jab while they’re out on the jol but to offer daytime jabs at places where they feel at home and frame it as a social event.

“When the economy opens up there will be many gatherings, and normally the first people to go out there, especially with summer coming, are the younger ones of 18 to 35. I call them the ama-TikTok or the bundle of joy generation. Even with HIV we had to set up youth-friendly services or go to sites where young people are already,” she says.

She adds it’s unlikely club-based vaccine sites will operate at night because “we don’t want to say vaccinate and then have a beer”.

Some of the clubs are not open anyway because the curfew means it isn’t financially viable, but she says owners “know their customers” and can encourage them to be vaccinated. “Also, those clubs will be able to say it is mandatory before entering.”

Mbombo says hitting Long Street with pop-up sites is next, and she is targeting other social spaces where young people gather. Yesterday she and her team met young people at Andrew Losaba Memorial Church in Khayelitsha.

“We think of this as Jabs b4 ‘Holy’ Jol,” she said, adding that another campaign is taking young people involved in arts and culture to the drive-through vaccination site at Athlone Stadium so it feels like a fun, artsy event. Also part of the ama-TikTok are the matriculants who have already turned 18. The minister jokes that for them it is “Jabs b4 Rave”.

Another province that has pioneered the approach of meeting youths and other age cohorts on their own terms is Limpopo.

Deputy director-general for health Dr Muthei Dombo says “community influencers” have been co-opted, as have church leaders, and malls are important as spaces where young people gather.

“We have set up mobile facilities in high-transit zones like shopping malls,” she says, adding that a focus on sports and recreation groups has also upped the numbers for the latest age cohort that has become eligible.

This, however, is not at the expense of older generations that are the most vulnerable. Dombo, like Mbombo, has used the same approach for other age cohorts: meet people of whatever age on their own territory and you’re more likely to get as many vaccinated as possible.

Mbombo’s Jabs b4 Jols echoes other examples globally. A recent advertising campaign in the UK warned young people they would “miss out” on access to nightclubs, according to The Guardian, and that the idea of “keeping dancing together safely” was being promoted.

After 18 months without in-person conferences, exhibitions and business meetings, the Western Cape is gearing itself to reintroduce conventions that ...
News
1 week ago

What the data says: 98% of over 60s who died were not vaccinated

According to data presented by Dr Saadiq Kariem, chief of operations in the Western Cape department of health, 98.3% of deaths in those over 60 were ...
News
1 week ago

'My illness has worked out for good': Covid-19 anti-vaxxer becomes jab activist after spending six weeks in ICU

A severe Covid-19 infection left anti-vaxxer Vanessa Joubert on a ventilator in ICU for 42 days, and led to her and her husband becoming vaccine ...
News
1 week ago