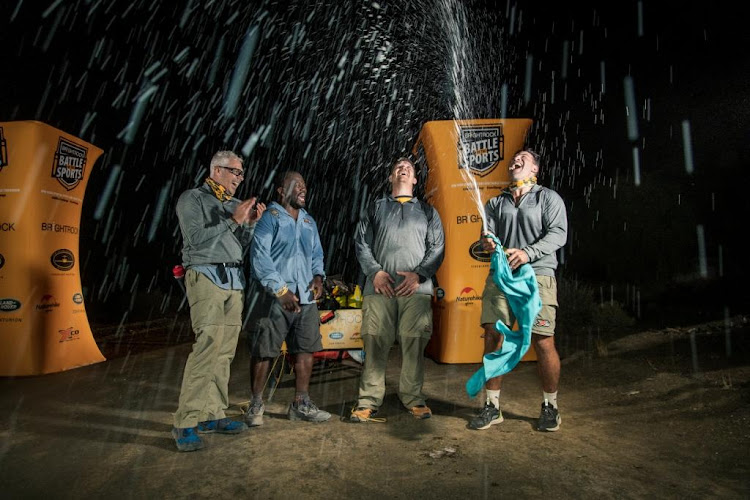 Team Rugby celebrates being the first team to complete the BrightRock Battle of the Sports challenge.
Image: Supplied

SA rugby heroes John Smit, Schalk Brits and Hanyani Shimange have returned to Johannesburg after four days in the Northern Cape desert to complete the 200km BrightRock Battle of the Sports fundraiser challenge.

For the past four days, the three players, along with team leader Erik Vermeulen, had to endure scorching temperatures, bleeding feet, punctured tyres and exhaustion as they circumnavigated the famous Verneukpan, fighting the clock with every step to set the bar for the next three teams.

Vermeulen said he was blown away by the close camaraderie that developed between the players. “They really were an amazingly strong and efficient team, and it was incredible to see how they translated the lessons and disciplines they practise on the field into this new environment.”

Smit agreed, saying that in spite of the tough circumstances, there was never a question of giving up. “When things got really tough, the banter would start to keep us distracted and motivated. Shimmy was a constant source of amusement.

“Another saving grace were our four playlists. Each of the guys had put one together and the music really helped us through the dark times. Our biggest challenge was if our speaker batteries ran flat.”

Schalk Brits said he felt the team — in typical rugby fashion, where players are taught to push boundaries — had come out too strong on day one, doing an incredible 70km. “We quickly realised how important it was to conserve our energy levels in the beating heat, so we regrouped quickly and definitely learnt a lot from the challenge.”

Arriving home, the team's spirits remained high. “We are so proud of what we have achieved and how the team remained firm in their commitment to support one another and finish strong for such a good cause. There was never a question of us not finishing. This has been such a great team experience and definitely like nothing we have ever experienced before,” said Smit.

“This event is the ultimate race of a lifetime and we could not be prouder of our first competing team,” said Events to Aid CEO Clive Grinaker.

All funds raised will go towards Covid-19 relief efforts in SA.

How you can do your part

“While our sports heroes are battling it out on the pan,” said Grinaker, “we are encouraging ordinary citizens from all walks of life, sports fans, corporates and schools — whether in SA or across the globe — to do the 200km.

“This can be done alone in one go or over the five weeks of the event, in teams of 10, with each person doing 20km, or 100 people doing 2km each — the distances are optional. As long as our participants have registered and the ‘challenge’ adds up to 200km, then the objective has been achieved.”

Each entrant will make a donation, said Grinaker.

The teams competing in the challenge: