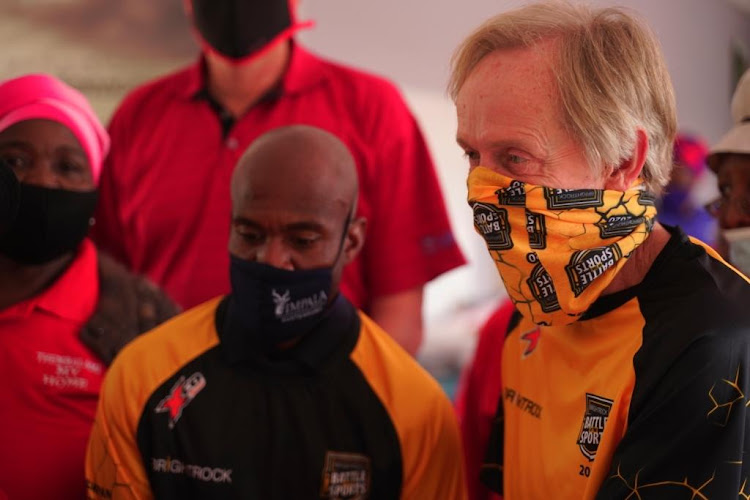 Comrades Marathon champions Bruce Fordyce and David Gatebe this week brought some cheer to Alexandra when they delivered food packages and Covid-19 protective personal equipment (PPE) to elderly residents who make use of the Rand Aid Association's Thembalami Care Centre in Lombardy East.

The two runners have also competed in the BrightRock Battle of the Sports endurance challenge and Covid-19 fundraiser that is still under way at Verneukpan in the Northern Cape, staged by Events to Aid in partnership with Right to Care.

Thembalami manager Esme van der Walt said elderly women in Alexandra visited the centre for breakfast and lunch three times a week as part of an outreach programme called Zamokuhle (“Yes, I can”) that has been running since April 2009.

Social grants are just not enough to support these older people

Many of these women are widows looking after their grandchildren whose parents are deceased or unemployed.

“Since lockdown, they have not been able to come and participate in the activities at the centre,” said Van der Walt. “Many of the gogos are also diabetic and relied on the breakfast meals so they could take their medication.

“Though food parcels were given at the beginning of lockdown, this was definitely not enough to sustain them. The food parcels we were able to give them were very basic — nothing compared to what they are receiving now, so it really is desperately needed.”

She added: “We have made a safe space for the Zamokuhle gogos, and the support of Right to Care and BrightRock through this event organised by Events to Aid is fabulous.”

Robinson, from Right to Care, said: “We are so proud to be part of this sporting initiative, which is striving to raise much-needed funds to effect positive change.

“At Right to Care we have been involved in providing support to old-age homes and older people in a number of areas around the country who were mostly forgotten when the pandemic struck in March.”

Right to Care has already supported the rollout of Covid-19 infection protection and PPE training to more than 3,000 elderly people in care facilities.

“We realised that attention was not being directed here when Covid-19 was affecting these homes, borne out by statistics in other countries showing high rates of neglect and mortality in the elderly care facilities,” said Robinson.

“We quickly stepped in to see how we could best support these vulnerable communities. Priority was given to checking facilities for infection control and providing caregivers with adequate training and protection. We also wanted to ensure food security and that chronic medication was delivered to these old people who were stuck in lockdown.”

Van Der Walt agreed, saying the demand was great. “Social grants are just not enough to support these older people.”

Team Running, which included Fordyce and Gatebe, completed their 200km Battle of the Sports dash around Verneukpan in the arid Northern Cape last week. They are competing against teams from SA rugby, soccer and cricket.

“It has been such a humbling experience being involved in this initiative, and being here today with David really highlights why we have all sacrificed so much on the pan. If we can help make a small difference, it will all have been worth it,” said Fordyce.

Gatebe was equally happy to support and interact with the elderly people at Thembalami. “People may be feeling a bit donor fatigued by now, but if everyone could just give a small donation, it would make a world of difference in so many lives,” he said.

Team Soccer is the third team of local sports champions to compete in the Battle of the Sports, a Covid-19 fundraiser
Sport
1 year ago