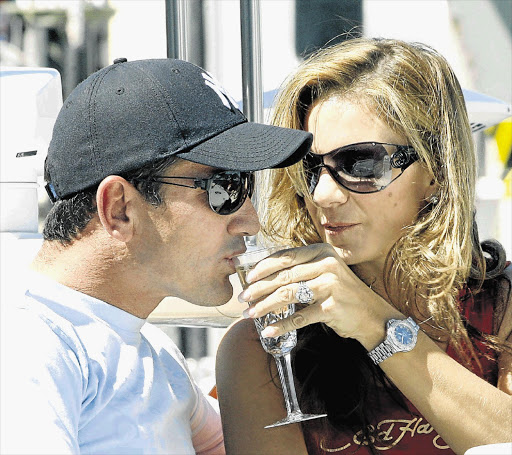 The family of late Springbok rugby player Joost van der Westhuizen has hit back at recent comments made by his former estranged wife Amor Vittone, which included claims that she was being painted as bad person, as well as, plans to write a book about her relationship with Joost.

Speaking to TshisaLIVE, family spokesperson Odette Schwegler said the family had noted recent comments made by Amor in the media but did not wish to respond except to clear a few things up.

"The family are very private. They don't want to get involved in a media circus. We don't want to speak about Joost or respond to Amor except to set a few things straight," Odette said.

Amor recently told TshisaLIVE that she was planning to release a book to address some of the misconceptions about her, including claims that she had apparently abandoned Joost in his last hours.

Odette said Amor was "free to write a book about whatever she likes" but denied that they had prevented her from visiting Joost prior to his death.

"Pieter (Joost's brother) sent Amor a text informing her that they were taking Joost home. She responded confirming they (Amor and the children) were going back to Joost's house. Pieter followed up telephonically confirming and pleading that she bring the children to say a final goodbye. The family arrived with Joost at approximately 12:30 and he passed at 13:04pm. Amor and the children arrived about an hour and a half later," Odette claimed.

Amor had previously claimed that she was told by the family to "go somewhere else" in the hours leading to Joost's death.

"They said that I wasn't there at his side in his last moments, but that was because they told us to go somewhere else. I am constantly painted as a bad person, uncaring wife and a deadbeat mother but that is bullsh*t. People do not know the truth and they have not walked in my shoes. I won’t be crucified for something I didn’t do wrong," she said.

"It is a blatant lie. Joost always made provision for his family through his estate and trust funds. Any claims that he was broke are untrue," Odette said.

Joost van der Westhuizen’s estranged wife, Amor Vittone, is tired of being "painted as a bad person and a dead-beat mother" and is planning to write ...
TshisaLIVE
4 years ago