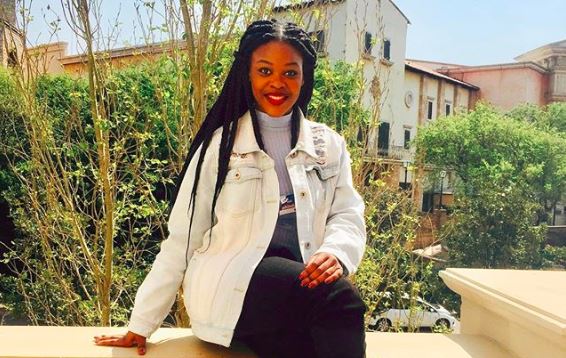 Having made it to the Idols SA top four last year, there's no denying that Phindy Dube is mad talented and she talked to TshisaLIVE about her journey in music after the reality show, and her "relationship" with Idols housemates.

Having These Two In My Life Makes Me The Luckiest Guy On Earth..... @paxtonfielies_ the lil sis I never had💕 @therealphindyd the BestFraaaand I always wanted❤️😍😘 #PaxPhinSto

However months after, the multiple loved-up snaps have since been deleted, leading many to think the relationship is over and Phindy is here to set the record straight.

In an interview with TshisaLIVE, Phindi laughed before trying to wiggle herself out of giving a straight answer about the state of her relationship with Christo currently.

"I will say this, everyone who was in the house, we are all really good friends, there isn't much to it. I still keep in contact with all them, like Paxton I ran into not so long ago and Christo... we still talk. When you live with people in one house for as long as I did, it is impossible not to build relationships, so yeah we are all really great friends."

Mzansi shared in their happiness when the couple began to open up more about what they meant to each other after Phindy shared a sweet post about Christo.

"My MCE (Man Crush Everyday). I have a picture for each day of the week and a bonus. Christo Daniels you keep me smiling like a lunatic even on rainy days. I walked into a competition and left with prizes, but my favourite prize has to be your heart."

Ncaaaw! Idols SA's Phindy and Christo are in love!

Ncaaaw! Idols SA's Phindy and Christo are in love!

While Christo Daniels (21) and Phindile “Phindy” Dube (19) may have lost the coveted Idols SA title to 17-year-old Paxton Fielies, they seem to have ...
TshisaLIVE
4 years ago

Phindi said she was more focused on keeping her talent in the spotlight and never letting Mzansi forget how talented she is.

Speaking to TshisaLIVE, Phindy said she's intentional shifting all focus to her career. She said that she was pouring out each and every resources into her music career post Idols.

"I have been blessed with a gift and the rest of my skills I have worked really hard on to get where I am. So everyday, i wake up and I do what I love and I have to make it because it is my plan A to Z."

The gifted singer hasn't stopped winning fans over with her voice. In addition to uploading covers and doing corporate events, Phindy has been hard at work on an EP and an album.

"Even before Idols, I had already started with my music, so after that I was just picking up where I left off. I love the love that I have received from my fans and i wasn't under any pressure not to "fade" away because I believe if people love you then they always will. I wanted to give them my very best."

Phindy said her album will have all facets of her.

"I have a plan to tell a story in my album; so for now my album will be ten tracks, ten genres, one story. I don't wanna tie myself down to one sound, because my sound is me. I have a huge personality so why should I have just one side show? I'm doing what I love and if it sounds good to me, it will probably sound good to others."

In case you forgot how good she is, here's a cover she posted.

Inlove with another man cover.

Yoh! There is levels to this stabbing thing, hey?
TshisaLIVE
4 years ago

Actor says he was sad to leave but would welcome a return to the popular soapie.
TshisaLIVE
4 years ago

Sjava says copying other musician's styles is too rife in the industry.
TshisaLIVE
4 years ago