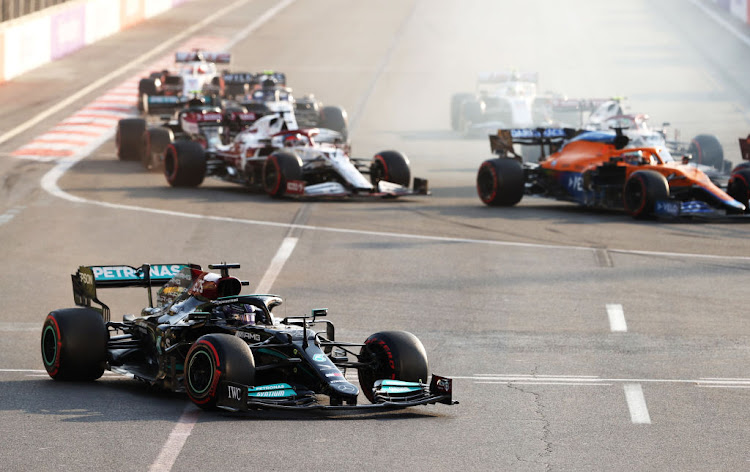 Lewis Hamilton runs wide after locking up at the restart following a red flag period during the F1 Grand Prix of Azerbaijan at Baku City Circuit on June 6 2021 in Azerbaijan.
Image: Clive Rose/Getty Images

Lewis Hamilton has had plenty of magic moments in his record-breaking Formula One career but Sunday’s Azerbaijan Grand Prix was one he would rather forget.

The seven times world champion failed to score after a botched restart he later revealed was caused by inadvertently engaging the car’s “brake magic” mode.

“I hit some sort of switch which caused only the front brakes to work,” he told reporters.

“There’s a button we have to help heat the front brakes and as Perez pulled over I reacted and accidentally (turned) on the switch and just locked up going straight as I only had front brakes.”

The race was halted and then restarted on the grid, with Perez at the front and Hamilton just behind but with his brakes smoking.

Hamilton then went straight at the first corner down an escape road and finished 15th, ending a run of 54 races in the points, not including the missed Sakhir Grand Prix in Bahrain that he sat out after testing positive for Covid-19.

The Briton said the weekend had been a “humbling” experience.

“It’s been an incredibly difficult two races," he said of Baku and Monaco, where he finished seventh and Verstappen won to take the overall lead.

“It’s obviously a very painful experience but I think today was really a stroke of bad luck, but Max had bad luck too and these sorts of things happen.

“I’m naturally sorry to all the team and we just regroup and try to come back stronger."

Mercedes team boss Toto Wolff said the team needed to address “underlying issues”, getting the car and tyres to perform.

“We know the deficit and we know we have gaps which we simply have to overcome but I have no doubt this is a team which is so strong and so angry, and we are going to turn that anger into positive form and come back.”