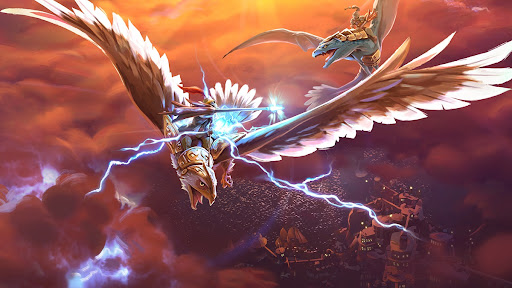 The Falconeer is an open-world, aerial combat game set within the fantastical land of the Great Ursee.
Image: Supplied

There’s a 9/10 chance that you’re sitting on a bus right now, staring out the window as life strolls on by at 35 km/h, oh look at that, a bird just flew into that guy’s head, but you didn’t notice. You didn’t notice it at all, because your mind has spiraled down the rabbit hole that is your imagination and you’re actually a fully kitted, falcon flying, dog-fighting pirate of the great unknown! Flinging lightning bolts at enemy airships and dropping mines on those down below! Somehow your giant-ass pirate hat sticks to your head as the raging storm around you charges up your ammunition! You incorporate the 5 D’s of dodgeball dog-fights, DODGE, DUCK, DIP, DIVE and DODGE again, swerving and weaving through the clouds, knuckles white and veins pumped. You’re the Red Baron, or Robin, of this fantasy. An untouchable force in the sky and one hell of a hit with the birds.

The Falconeer has just recently launched on the Nintendo Switch with its latest Warrior Edition, which includes the base game plus all the DLCs, meaning that the 9/10 of you sitting on that bus can sate that wild imagination of yours with dogfights on the go and the 1/10 of you that are, for some reason, not using the bus can pick up the Warrior Edition on Steam, Xbox or PlayStation and get to dog-fightin’ via the couch.

Soar through the skies aboard a majestic warbird, explore a stunning oceanic world and engage in epic aerial dogfights, in this BAFTA nominated air combat game from solo developer, Tomas Sala.

The Falconeer is an open-world, aerial combat game set within the fantastical land of the Great Ursee. An expanse of ocean, dotted with islandic towns from which you travel, shop, and quest. You ride your majestic warbird, or other battle-ready beast depending on the class you chose, through the skies, battling other enemy falcons, airships, sea ships, and other fantastical beasts. Since it is also an open world, you are free to explore the Ursee, completing side quests, gaining Splinters, in-game currency, buying better weapons, or other upgrades for your battle-bird; Although, by “free to explore”, I mean “strongly recommended”. The mainline quests can get a bit challenging if you haven’t gone out to earn your keep and better your bird. I’m not complaining, I enjoy the RPG-esque element of having to complete a few extra jobs here and there to get the good stuff, but sometimes the side quests are just a little… boring. Delivering a jar of chemicals to another island, without an enemy in sight, means you can fast travel from A to B and back to A again within the space of a minute. It just seemed a little out of place, considering I had only just shot down 6 other warbirds and picked up a few scars of my own.

The other thing that feels a little disjointed is the way the story doesn’t flow. The game has multiple chapters that you play through, which can be done in any order.  With each chapter, you can join a different faction and take on different enemies, but each time the story starts anew you keep your items and your Splinters. So when you pick a new class to play, or not, and begin the chapter, you do so all fresh-faced and fully feathered. It felt a little weird moving from one chapter to the next with them being completely unrelated. The game got a little less immersive when the chapters ended. 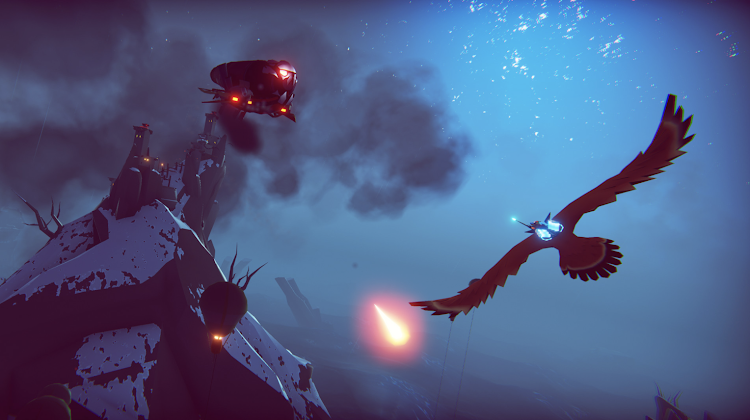 The game has multiple chapters that you play through, which can be done in any order.
Image: Supplied 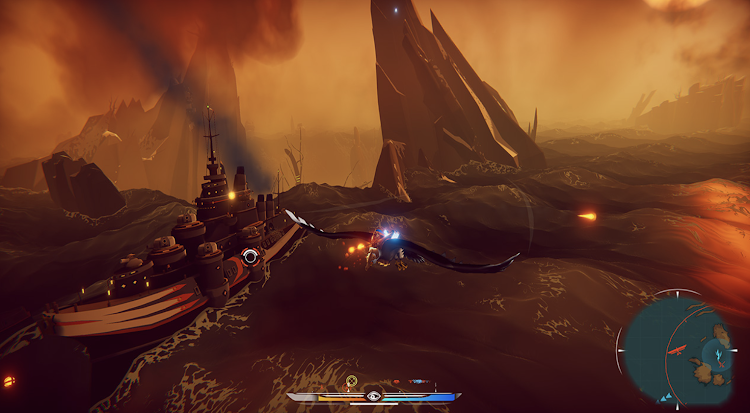 The Falconeer – Warrior Edition delivers just that and I think the game is a perfect fit for the Nintendo Switch.
Image: Supplied

Besides these few things though, the game really comes together.

The game graphics are all procedurally generated, so it feels like a living world. At times the bright orange sunsets make you want to glide through the skies, peaceful and pleased, and at others, the deep and dark stormy skies fill your veins with adrenaline, like war drums before the fight.

Each character is fully voice acted, and done so quite well, I really felt like I was living in a world where Pirates, ships, and high-flying Falconeers were the norm. The game’s soundtrack is great too, it gives off a raw, tribal aesthetic that works well with the world. I also really enjoyed the cinematic that played when you died, it was nice to have some sort of other-worldly presence around during death instead of just a “GAME OVER” in big, bold red across the screen.

The controls are smooth, slick, and simple, I had no difficulty getting to grips with my feathered friend, considering I never visited the cockpit of the planes I flew on when I was a wee’ young’un. Swerving and rolling, shooting down other enemies while dodging and weaving. It really did get exciting in the heat of the battle.

Overall, if you’re looking for an aerial combat game that won’t take you years to master and has an enjoyable feel to it, The Falconeer – Warrior Edition delivers just that and I think the game is a perfect fit for the Nintendo Switch.

BOTTOM LINE
The Falconeer is an easy to pick up air combat game, that delivers high highs in the heat of the battle, but has some weird lows.
PROS
Piratey, tribal aesthetic that was real fun
GIANT ASS WARBIRDS!
Easy to get the hang of
When the battles get busy, Falconeer shines
CONS
Has some dull points
Story doesn’t flow

Despite being 6’4 and having a decent 3 point shot back in my high school, I never took on the sport of Basketball.
News
10 months ago

Now I’m not saying coal is useless! God knows that Eskom sure could use a lot more of it, I’m just saying it’s not the golden nugget you thought it ...
News
10 months ago

We find out what it takes to develop and market your own game in South Africa.
News
11 months ago