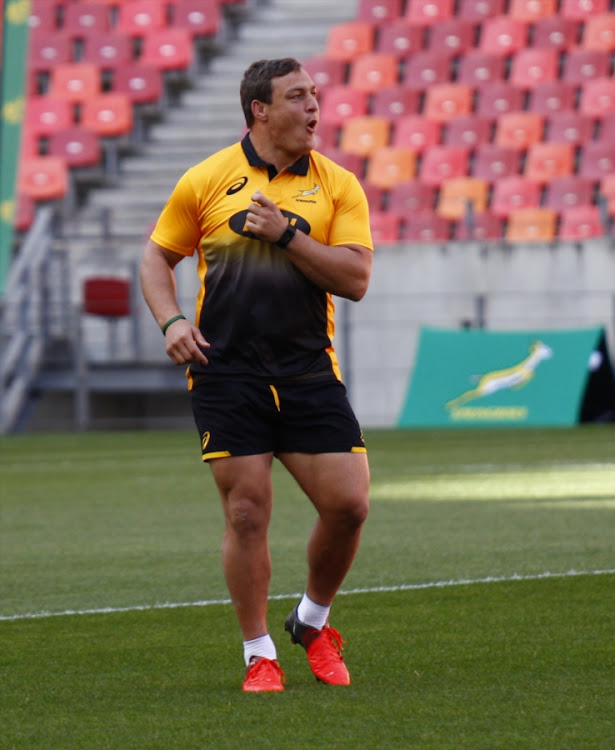 A neck injury is expected to rule Springbok prop Frans Malherbe out of the entire Rugby Championship campaign.

The front rower underwent scans on Monday in Port Elizabeth to determine the severity of the injury after complaining about stiffness in his neck.

“Frans consulted a neurosurgeon in PE who suggested extended rest for the player‚ with follow up scans to be done in two weeks’ time‚” team doctor Konrad von Hagen said.

Malherbe is replaced by Ruan Dreyer‚ the Lions prop who made his Springbok debut in the third Test match against France in June.

Wales and British & Irish Lions centre Jonathan Davies believes that the addition of two South African teams to the PRO 14 will be a boost for the ...
Sport
4 years ago

The squad was strengthened on Monday by the arrival of the experienced scrumhalf Francois Hougaard‚ who is based in England where he plays for Worcester Warriors.

His arrival means the Bok squad now have their full complement of players.

“Ross Cronje did not train last week because of a rib injury that he sustained playing in the Super Rugby final playing for the Lions‚” Von Hagen said.

“I am pleased to say Ross will resume training today (Monday).

“We will see if he can take contact later in the week and then decide about his availability.

“I am happy to say that Jaco Kriel‚ who was sick with flu last week‚ returns to training today (on Monday).

Versatile Bulls prop Trevor Nyakane has been praised by Springbok scrum coach Matt Proudfoot ahead of Saturday’s showdown against Argentina at Nelson ...
Sport
4 years ago

“Malcolm Marx‚ who sustained a contusion of his rotator cuff in the Super Rugby final‚ is also back in training.”

Von Hagen said fiery flank Siya Kolisi is also back to full training after sustaining an ankle injury during the Super Rugby semifinals.

“Flyhalf Handre Pollard is progressing well and was part of the full training sessions on Thursday and Friday.

“We will continue to let him train with the full squad and we will let him continue working on his fitness so he can complete his rehabilitation.

Province expose Bulls' lack of depth in exciting first half

If new Blue Bulls director of rugby John Mitchell had any doubts about the size of the challenge that awaits him, they were dispelled by a tepid ...
Sport
4 years ago

“Warren Whiteley was operated on for a tear in his abdominal muscle on Friday.

“I spoke to him today and he says he is feeling a lot better and the operation was a success.

“He will continue with his rehabilitation‚” Von Hagen said.