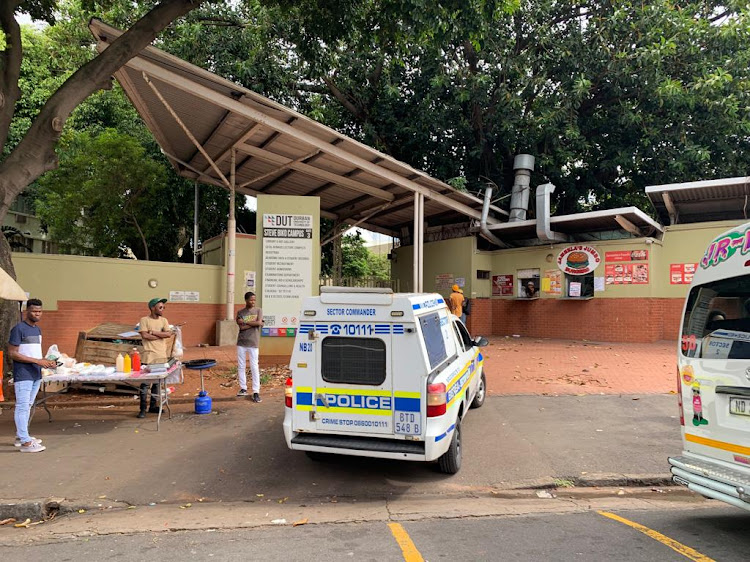 Police have said they don't know exactly where a fatal shot - which killed a Durban University of Technology student on Tuesday - came from.
Image: Jackie Clausen

Police said on Tuesday they were unsure whether the Durban student shot during a protest had in fact been killed by a security guard.

"Right now, it is not clear who shot who," Colonel Thembeka Mbele said. "But what we do know is that there was a confrontation between the security guards and the students. But we don't know where the shot came from."

The student, whose name is known to TimesLIVE, died in hospital after suffering a gunshot wound to the stomach during clashes at the Durban University of Technology's Steve Biko campus.

Mbele said several people, including a security guard, were injured during the clashes.

A student has been killed after being shot at the Durban University of Technology's Steve Biko Campus on Tuesday.
News
2 years ago

According to Mbele, the guards were trying to stop a group of around 30 students, who were armed with bricks and stones and were trying to damage the administration building.

The unrest at this institution - and several others across Durban and the country - is believed to be related to the ongoing issue of a shortage of student accommodation and NSFAS funding.

Campus security clashed with students at Wits University on Tuesday as protests continued over funding and accommodation.
News
2 years ago

"We are monitoring the campus as well as certain student residences around Durban," said Sewpersad.

Various police forces, including SAPS, were reportedly meeting at a nearby police station to discuss the situation.

According to a police source with knowledge of the incident, students stormed one of the halls at the institution before security guards tried to stop them.

A fight broke out, the source said, and students started throwing bricks. It was during this exchange that the student was hit.

Another police source said that a woman had called for help during the scuffle, and the security guard had intervened to help her.

Meanwhile, the Congress of the People has called on government to take responsibility for the death of the student.

"Cope blames government for the death of the DUT student who was shot and killed following a protest outside the Durban campus," said the organisation's Dennis Bloem.

He said they were concerned by the manner in which security officials have dealt with protesting students.

"We don't think there was a need for the security to use live bullets. It's reported that the DUT students who gathered on the road weren't armed.

"We do not promote protests at our institutions but we say there's no need to shoot and kill students. All the DTU students needed was government to attend to their issues," he added.

Student leaders at the University of Witwatersrand have vowed to render the institution ungovernable.
News
2 years ago

'We are going to fight,' Mcebo Dlamini tells Wits protesters as tensions flare

Prospective students and parents busy with registrations were left stunned when protesters stormed the Durban campus of Rosebank College on Monday.
News
2 years ago