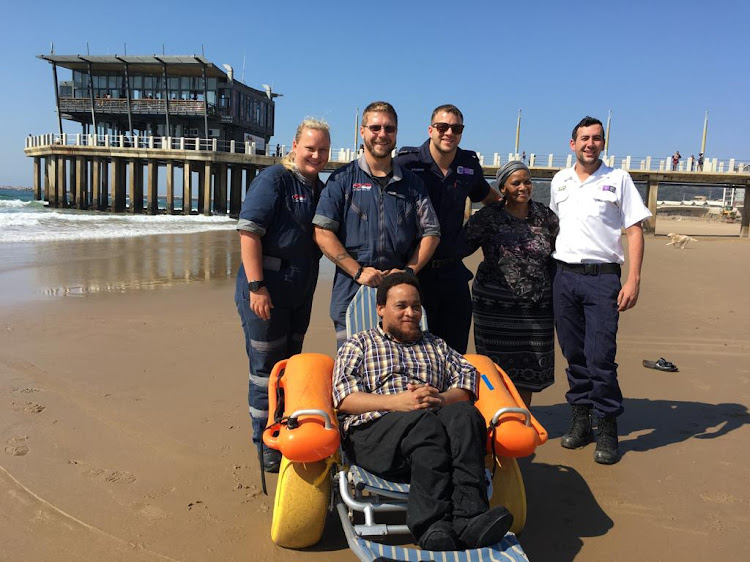 Sibusiso Zondi, who has been confined to his South Beach, Durban, flat for two years because of a malfunctioning lift, has been longing to feel sea water on his feet.

On Friday, a group of emergency personnel made his wish come true when they carried him down eight flights of stairs and took him to the beach.

Zondi, 34, was born with cerebral palsy, a disorder that affects movement and has left him wheelchair-bound. His life was made even harder in 2011 when the lift to his flat stopped working, rendering Zondi, who lives on the eighth floor, a prisoner in his own home.

“For me to hold on this long, it can only be by the grace of God. I sit and watch TV. I do the same thing over and over again,” said Zondi.

He last left the flat in 2017, when his brother, who lives in Johannesburg, came to visit and was able to carry him down and back up the eight flights of stairs.

Alfred Newman, from eThekwini Municipality Fire Services, was alerted to Zondi’s situation by the supervisor of the building in which he lives.

“Two weeks ago, I got a call from the building supervisor, who indicated that he had a disabled man who had been in the flat for 10 years and all he wanted to do was go to the beach,” said Newman.

From Durban's mean streets to skating with the stars, Thalente's Olympic dream lives on

When he was a homeless kid hanging out at the skatepark on Durban's beachfront, Thalente Biyela dreamt about competing against the world's best ...
Sport
2 years ago

After visiting Zondi, Newman contacted Leon Fourie from Life Response, an ambulance service, who jumped at the opportunity to help.

“This is such a story of hope, and seeing Sibusiso's determination and perseverance is just amazing,” said Fourie.

While Zondi kept paramedics on their toes with his sharp sense of humour and witty remarks while enjoying breakfast at a beach cafe, his mother, Zamajali Ngcobo, looked on, elated by her son's joy.

“This all feels like a dream, seeing him this happy. Each time I leave the house and go into town I feel heartbroken because he just sits there thinking how long will it be till they fix the lift. It doesn't seem like they will fix the lift any time soon,” said Ngcobo.

While watching her son being wheeled into the ocean in a special chair used by lifeguards, Ngcobo reflected on her battle with the building's body corporate.

“After the lift stopped working I stopped paying the service levy as a form of protest and they took me to court and I lost,” said Ngcobo.

She said she was ordered to pay R26,752, but defaulted on the judgment and is now being evicted.

New Frame reported in June that according to Ngcobo's April 2019 levy statement, she owes R540,809, including legal fees. She has tried to sell the flat, but says no-one will buy it because the lift isn't working.

“It is in God's hands now. I have been in talks with a good Samaritan, who said they would help me sort everything out,” she said.

Zondi told the paramedics: “I can move on my own and push myself through Smith Street (Anton Lembede), but all I need is for them to fix the lift.”

After getting his feet wet, Zondi was taken to Ushaka Marine World.

“I always see these things (sea animals) on National Geographic. I never thought I would ever be able to see them in person,” he said.

A mom of three from Woodlands in Mitchells Plain, Cape Town, is heading to the Equality Court after her wheelchair-bound son was denied access into a ...
News
2 years ago

A 107-year-old woman attributes her long and healthy life to staying single.
Lifestyle
2 years ago

A paralysed 12-year-old who refused to take no for an answer when he wanted a bicycle is now eyeing his latest gold medal.
News
2 years ago