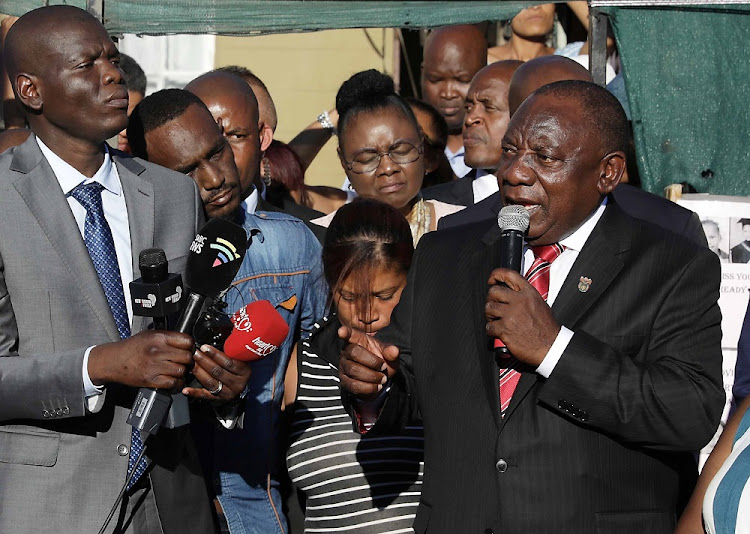 As people called for the return of the death penalty, President Cyril Ramaphosa told residents of the Cape Flats suburb of Elsies River on Tuesday that an alleged child killer should never have been released on parole.

The grieving parents of eight-year-old Tazne van Wyk were visited by Ramaphosa to “express his heartfelt condolences and sympathy”.

She was allegedly kidnapped and then killed by Moehydien Pangaker, 54.

Pangaker is reported to have absconded from parole in 2015 after being convicted of culpable homicide, child abuse and kidnapping in 2008.

Pres. Ramaphosa addressing the family and community outside Tazne van Wyk’s residents on the Cape Flats “He was released while he was on parole, he should have never been released on parole. Its shows us that there is something wrong with our parole system”. @TimesLIVE pic.twitter.com/U8GSqpCvd5

“She was brutally killed by somebody who was released on parole," Ramaphosa told residents.

"That shows that there is something wrong with our parole."

Elsies River resident Geraldine Jaffa’s waits outside the home of #TazneVanWyk where President Ramaphosa is visiting the family of the slain 8yo girl. Her kids used to play with Tazne before she was kidnapped, now she fears for her own children. pic.twitter.com/H0SdKxajLu

The grieving parents of eight-year-old Tazne van Wyk are expecting a visit from President Cyril Ramaphosa in the Cape Flats suburb of Elsies River on ...
Politics
2 years ago

A rioting crowd set fire to three buildings on Friday after the court appearance of a man accused of kidnapping and murdering eight-year-old Tazne ...
News
2 years ago