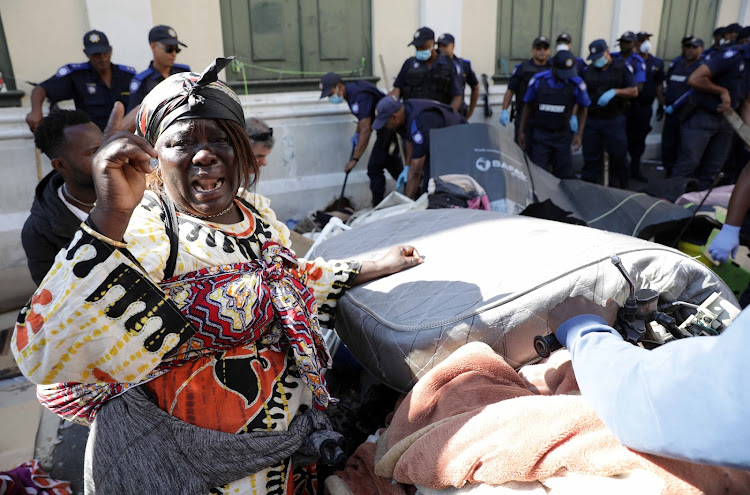 One of the refugees evicted from the Central Methodist Mission in Cape Town on March 1.
Image: Esa Alexander/Sunday Times

Home affairs minister Aaron Motsoaledi has warned a group of refugees who have been protesting in Cape Town’s city centre for nearly six months that they may be repatriated if they refuse offers of reintegration to their communities.

“This offer has been rejected again and again. Refugees continuously say they will not stay in South Africa. If this option is not taken, I don’t think the country has got an option but to insist that we must take people back to their countries of origin,” said Motsoaledi.

He was briefing parliament’s portfolio committee on home affairs, the City of Cape Town, the South African Human Rights Commission (SAHRC), and the United Nations High Commissioner (UNHCR) on the situation involving the refugees in Cape Town on Thursday.

The refugees have been demanding to be resettled in other countries, claiming that they are not safe in South Africa.

Self-styled refugee leader Jean-Pierre Balous may have unwittingly exposed himself to the possibility of being deported after he allegedly attacked ...
News
1 year ago

Motsoaledi said that the only way forward was to reintegrate the refugees back into the communities they lived in before the protest action. This was the consensus in various meetings facilitated by SAHRC between different state departments and stakeholders, he said.

“The countries they want to go to are not ready to welcome them.”

He said Namibia “has put it in writing to me” and the Canadian authorities had confirmed that people applying for asylum in a third country (not their country of origin or South Africa) “must do so as individuals and not as a group”.

The City of Cape Town told the committee that it planned to return to the Western Cape High Court on March 17. This is in a bid to bring an end to the occupation by refugees around Greenmarket Square.

On February 17, judge Daniel Thulare granted an interim order that effectively prohibited refugees who are staying inside and outside the Central Methodist Mission from living on the street.

On March 1, the city enforced its bylaws and removed the refugees from the square. They are now camping in the street a few metres away from the central Cape Town police station.

The city’s executive director for safety and security, Richard Bosman, told the committee that most of the protesting refugees were not unemployed and destitute “as they want people to believe”.

He said he had seen some of them hailing Ubers to their homes and workplaces in areas like Parow and Goodwood.

“They would leave for a few hours during the day and return late afternoon to occupy Greenmarket Square. This is a completely different situation from 2008, when it was actually a disaster. During the assessment, the statement of xenophobia was totally unfounded,” he said.

Bosman said the city and the police had been approached by some refugees asking for assistance to be reintegrated, but “immediately a crowd would come and pull them away from us. They would be intimidated and action taken towards them”.

There is “a core group of people intimidating people via SMS not to take any services or engage with our staff,” he said.

SAHRC commissioner Chris Nissen told GroundUp that about 15 families had asked for help to move back to the communities they came from.

“There is a myth that if they go, people living in the church will get preference to be resettled, so they would rather stay here. But the conditions they are living in now are terrible - there is no water and no sanitation facilities,” he said.

Zoe Nkongolo, director of Africa Unite, a human rights organisation in Cape Town, believes that the refugees can be successfully reintegrated and regain their livelihoods.

“The responsibility to reintegrate lies mainly on the migrants who have left their communities. If they choose to go back they must re-enter with an open mind. If they re-enter with a negative mindset, they will most likely face negative consequences due to their attitude,” he said.

WATCH | 'You won't arrest me': refugee leader and supporters attack police in court

Parliament has called for the immediate resolution of the dispute between the City of Cape Town and refugees who were located outside the Central ...
News
1 year ago

WATCH | Refugees sleep in park after removal from CBD

“If we were white people or if we were South African, we wouldn’t be treated like this.”
News
1 year ago