PODCAST | Gone without a trace: where is Eugeine 'Zane' Nel? 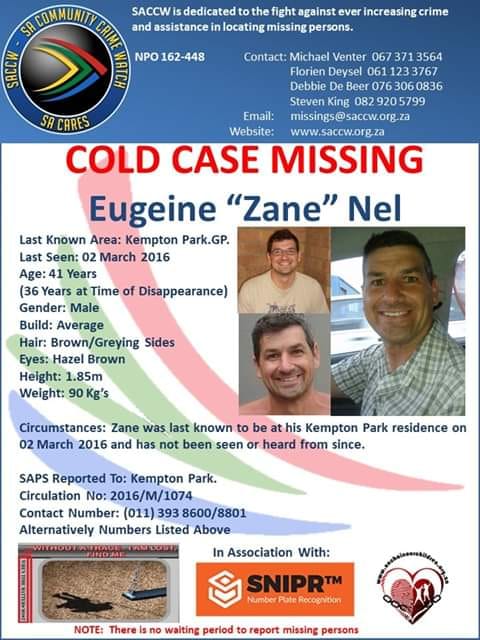 On March 2 2016, Eugeine “Zane” Nel woke up with a migraine. He told his girlfriend  he wouldn’t be going to work that day. The last time she saw him, he was asleep in his bed. That afternoon a mystery would begin that continues until this day. A mysterious letter, a one-way flight and an expected deposit of money would be the only clues when he disappeared without a trace. With  police convinced he had gone off to start a new life, despite significant evidence to the contrary, Zane’s sister has become his champion.

In Episode 38 of True Crime South Africa, we discuss the baffling disappearance of Eugeine Zane Nel, and uncover the evidence that could lead to resolution in this case.

In today’s spotlight minisode, we delve into the recent murders in Mtwalume on the south coast of KwaZulu-Natal to determine whether the suspect who ...
News
1 year ago

In this episode, True Crime South Africa interviews pathologist Ryan Blumenthal to get insight into the field of forensic pathology, and his journey ...
News
1 year ago

PODCAST | When survivors fight back: the serial rapist who picked the wrong victim

In the 1970s in SA, women were living under a reign of terror.
News
1 year ago