WRAP | J&J vaccination rollout resumes with warnings of side effects 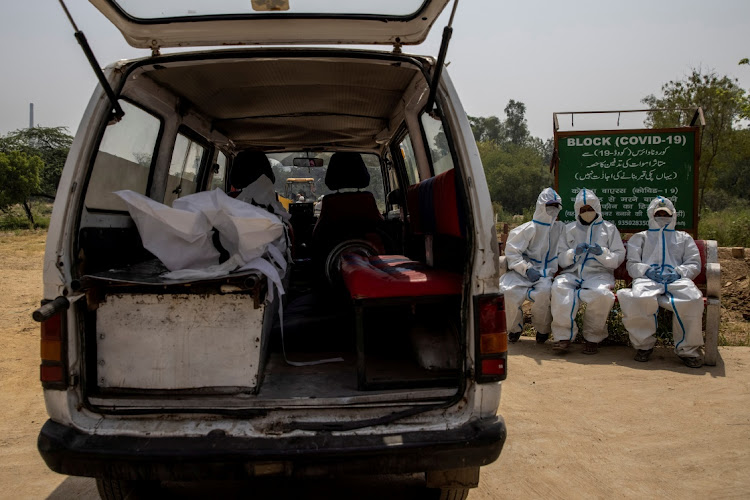 The body of a person, who died from Covid-19, is seen inside an ambulance as healthcare workers wait for a grave to be prepared for its burial in New Delhi, India, on April 28 2021.
Image: REUTERS/Danish Siddiqui

Indians struggled to register online for a mass vaccination drive set to begin at the weekend as the country's toll from the coronavirus surged past 200,000 on Wednesday, worsened by shortages of hospital beds and medical oxygen.

The second wave of infections has seen at least 300,000 people test positive each day for the past week, overwhelming health facilities and crematoriums and prompting an increasingly urgent response from allies overseas sending equipment.

The last 24 hours brought 360,960 new cases for the world's largest single-day total, taking India's tally of infections to nearly 18 million. It was also the deadliest day so far, with 3,293 fatalities carrying the toll to 201,187.

The DA has identified space, or capacity, challenges at one of the health-care facilities earmarked as a Covid-19 vaccination site.

DA shadow minister for health Siviwe Gwarube on Wednesday visited the Umkhumbane Community Health Centre in Cato Manor on the outskirts of Durban.

The visit, which included DA KwaZulu-Natal leader Francois Rodgers and party spokesperson on health in the province, Rishigen Viranna, was a launch of an oversight tour of vaccination sites across the country to ensure that provinces are ready for the second phase of the vaccine rollout.

J&J vaccination rollout resumes with warnings of side effects

The Johnson & Johnson (J&J) vaccination rollout programme, which was halted two weeks ago, resumed on Wednesday with strict warnings of side effects.

“We have asked members to be informed of this risk and they should also be conscious of it. We have signs out there so that people can be aware of certain signs such as headaches, dizziness, and abdominal cramps. If they have any sense of discomfort that they feel, they should make sure that they get checked so we can be on the lookout for these symptoms,” said health minister Zweli Mkhize.

J&J vaccination rollout resumes with warnings of side effects

SA is likely to experience a third wave of Covid-19 infections during winter, when temperatures drop and people’s immunity will be weakened.

This is according to esteemed epidemiologist Prof Salim Abdool Karim, who until recently was chair of the ministerial advisory committee on Covid-19.

“When I look at the trends, there is a reasonable likelihood we may see the third wave at the end of June and in July. That is when we are mostly indoors,” Karim said in an interview with SAfm on Wednesday.

Russia's relatively low rate of vaccination so far is linked to demand, Kremlin spokesperson Dmitry Peskov said on Wednesday, adding it would grow in line with demand while supply of doses was strong and distribution was working fine.

Asked why Russia is not in a leading position globally in terms of the share of its population inoculated against Covid-19, Peskov said: "At the moment, the vaccination rate is absolutely in line with the demand of the population ... Of course, we expect that the demand for these vaccines will grow over time and thus the rate of vaccination will increase."

The national department of health has temporarily halted the vaccination of pregnant and breastfeeding mothers with the Johnson & Johnson (J&J) jab while it investigates the possibility of potential side-effects.

This was revealed by health minister Zweli Mkhize on Wednesday when he briefed parliament’s portfolio on health about the latest developments regarding the J&J clinical trials, vaccine procurement and progress in the vaccination rollout programme.

The government has until Friday to establish the no-fault Covid-19 vaccination compensation fund, a requirement from vaccine manufacturers Johnson & Johnson (J&J) and Pfizer.

Health minister Zweli Mkhize on Wednesday told parliament’s portfolio committee on health that the regulations have been published.

“We are hoping that it will make it easier for people to understand that we are protecting them further as the government, so that there is no-one who is exposed to a risk without any form of redress,” said Mkhize.

The government coronavirus taskforce also reported 387 deaths, pushing its death toll to 109,367. The federal statistics agency has kept a separate count and reported a toll of more than 225,000 from April 2020 to February.

Pakistan recorded more than 200 Covid-19 deaths in a day for the first time since the start of the pandemic on Tuesday, as the government said it was considering stricter lockdowns.

A total of 201 new deaths were recorded on Tuesday, bringing the country's overall death toll from the virus to 17,530, according to the National Command Operation Center (NCOC), which oversees the government's pandemic response. The previous highest daily death count was 157 recorded on April 23.

Covid-19 vaccines deployed in England can cut transmission of the coronavirus by up to a half, data from Public Health England showed on Wednesday, in addition to the protection the shots offer against symptomatic infection.

Research showed that people who became infected with the coronavirus three weeks after receiving one dose of Pfizer or AstraZeneca vaccine were between 38% to 49% less likely to pass it on to household contacts compared to those who were unvaccinated.

The shots also stop a vaccinated person developing infection to start with, reducing the risk by around 60% to 65% from four weeks after one dose of either vaccine.

South Korea said on Wednesday it will offer some exemptions to mandatory quarantine measures for people who have been fully inoculated against Covid-19, in an effort to encourage more vaccinations.

South Korea has so far vaccinated 4% of its 52 million strong population, but has set an ambitious target of giving shots to 70% of its people by September and reaching herd immunity by November.

From May 5, residents who have had both coronavirus vaccine shots will not have to undergo the mandatory two-week quarantine for people who have been in contact with a confirmed patient or have returned from overseas travel, ​Yoon Tae-ho, a senior health ministry official, told a briefing.

The exemption will only apply for those with a negative Covid-19 test and who show no related symptoms.

Botswana’s President Mokgweetsi Masisi will miss a southern African regional meeting he was due to chair on Thursday to discuss recent attacks on Mozambique after a staff member tested positive for Covid-19, prompting him to self-quarantine, his office said on Tuesday.

Botswana, SA, Zimbabwe and Mozambique will be attending a summit of a division of the Southern African Development Community (Sadc) where they will receive a report on how they can help Mozambique’s Cabo Delgado province after Islamic State-linked attacks there.

Botswana president in self-quarantine, will miss Sadc meeting on...

India's Covid-19 death toll surged past 200,000 on Wednesday as shortages of oxygen, medical supplies and hospital staff compounded a record number of new cases of the virus.

India's second wave of Covid-19 infections has seen at least 300,000 people a day test positive for the past week, overwhelming healthcare facilities and crematoriums and driving an increasingly urgent international response.

Fully vaccinated people can safely engage in outdoor activities like walking and hiking without wearing masks but should continue to use ...
News
7 months ago

Two new cases of blood clots after administration of Johnson & Johnson's single-dose Covid-19 vaccine are being investigated by federal health ...
News
7 months ago

Vital medical supplies poured into India on Tuesday as hospitals starved of life-saving oxygen and beds turned away coronavirus patients, while a ...
News
7 months ago