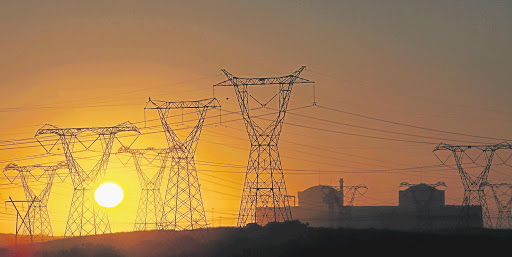 A view of the setting sun through the pylons of the Koeberg nuclear power station near Cape Town. The government has talked about adding more nuclear reactors for years, but analysts are sceptical they will be built given the high cost involved. File photo.
Image: ESA ALEXANDER

The National Energy Regulator of SA (Nersa) on Thursday backed a long-term government plan to build nuclear power units, a move that could help to shift the country away from coal and into less carbon-intensive means of generating electricity.

Africa's most industrialised economy has the continent's only operating nuclear plant, a 1,900MW facility outside Cape Town that was built under apartheid.

Nuclear is dwarfed by coal, which produces more than 80% of South Africa's power, making it the continent's biggest greenhouse gas emitter. Coal-fired capacity was 37,000MW last year, whereas utility-scale solar and wind, which like nuclear don't pump CO2 into the air, stood at more than 4,000MW.

The government has talked about adding more nuclear reactors for years, but analysts are sceptical they will be built given the high cost involved.

In 2018, the government abandoned a massive 9,600MW nuclear expansion project championed by former president Jacob Zuma that was tainted by corruption allegations, but a year later it resuscitated the project on a smaller scale.

Coal is darkening the doorway for net-zero climate goals

Emissions need to decline by 4,4% a year, but were 5% higher in the first half of 2021 than they were last year
World
4 months ago

On Thursday, Nersa gave its "concurrence", or support, for that plan. Its reasons will be published later.

Among conditions for the concurrence, Nersa's electricity subcommittee said last week the procurement should be at a pace and scale that the country could afford and the tender process should be transparent and competitive.

Local energy expert Chris Yelland said important steps such as the National Treasury approval were outstanding and he did not expect the government to request bids from nuclear vendors imminently.

"I would say the chances of the new plant being built are pretty small because of the cost, the construction time and the legal challenges that will happen," he said.

Civil society groups blocked the Zuma-era nuclear project in the courts and are also opposed to the latest plan, seeing it as a costly option when public finances are hugely stretched by the coronavirus crisis.

SA has already experienced load-shedding for 650 hours, in the first half of 2021.
News
5 months ago

Should Eskom step on the gas or wait for greener alternatives to coal?

To many analysts, the fuel looks to be SA’s easiest answer as it sets out to decommission ageing power stations
Opinion & Analysis
5 months ago